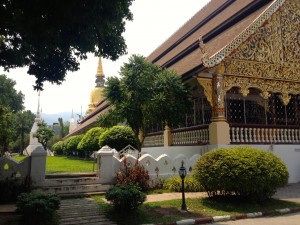 We moved to Southeast Asia, and you can too!

Since arriving in Thailand, Kevin and I have realized that we made a huge mistake in waiting so long to quit our jobs and move to Southeast Asia.  We got so hung up on questions like “what will people think of us?” and “how can we consider moving abroad since we just bought a home?” and those things nearly made us miss out on what is going to be one of the greatest experiences of our lives.  In hopes of helping out others who may be on the fence about making a similar change in their lives (or explaining this crazy change in our lives to friends, family and blog readers), we’ve put together this post to try to put some of your worries to rest.  Here’s a list of some of the things we worried about before moving abroad, and how we feel about them now that we’re here. 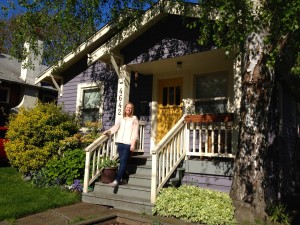 Our beloved home in Seattle

What if renters destroy our home?  This was one of our biggest worries!  We’ve done a lot of work on our house – we completely gutted and remodeled the bathroom, built a deck in our backyard, painted the exterior a fabulous purple color, worked tirelessly on the landscaping, and painted nearly every room inside the house.  I can’t believe we almost decided not to spend time abroad because I was worried about whether or not tenants would clean our grout lines.  I have news for you, folks, renting out your home will be good for you.  It’s liberating to let go of the material possessions in your life and become more experience oriented!  At the end of my life, I know for certain that I’d regret missing out on experiences much more than I’d regret a few scrapes some renters made in our hardwood floors. 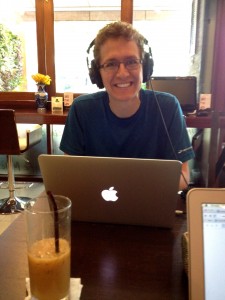 Kevin’s working hard at a Cafe

What if we sink into bad work habits once we arrive?  I have an addictive personality – when I loved the TV show “Friends” during sophomore year of college, I holed up and watched all 10 seasons in about 2 weeks.  It’s true, ask my roommate Holly.  Kevin and I were afraid we’d sink into terrible work habits once we arrived here, since we’re managing our own schedules and projects completely independently for the first time in our lives.  Luckily, it’s quite motivating to work on projects you love, and this hasn’t been an issue.  We use a few methods to keep us motivated and on track, which I detailed in my previous post about Maximizing Productivity with the Pomodoro Method.

Will friends, family, coworkers, and strangers think we’re crazy?  When we started telling people we were moving to Southeast Asia, the resounding response was “Woo hoo!  Awesome!”  (Although our favorite response came from our friend Erik who blurted out, “You Assholes!”  We loved that.)  When I sent out my “farewell” email at work, the responses I received were along the lines of “I wish we had done that when we were young” and “you’ll never regret this”.  We’ve also received a surprising amount of support from random Craigslist people we sold some things to when we were clearing out our house.  Craigslist people can be oddly supportive!  Not a single person has expressed doubts to us about this adventure, so don’t let that fear stop you.  Thanks, family and friends, for being so supportive! 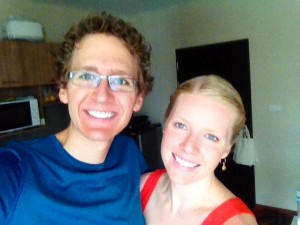 Spending 24-hours a day with your spouse: so far so good.

Will this be good for our marriage?  Kevin and I spend every minute of every day together now, except for when we hit the gym separately or are in the bathroom.  That’s a huge increase over the amount of time we used to spend together in Seattle when we both had jobs outside the home.  After getting over my frustration that I’ll no longer be able to secretly eat a candy bar every now and then, we’ve settled into a good routine.  The trick is to establish boundaries – one of our best is to not bother the other person if they’re wearing headphones.  Because our marriage is in good shape, I don’t mind sharing that we’re also finally going through a book we bought before our wedding titled The Seven Principles for Making Marriage Work.  I’m also doing my best not to talk to Kevin through the bathroom door when he’s in there – boundaries, Melanie!

Will this throw us behind in retirement savings?  Yes, it will.  But that’s ok, because we spent the last 5 years working hard to get a little bit ahead.  If you want to do something like this down the road, max out your 401k plan with your employer right now!  Open a Vanguard investment account and funnel as much money into it as possible!  In the end, for us, we went into this adventure knowing that we’re probably pushing retirement out by a year or two.  But that’s something we can accept – we want to travel now, before we’re too old to enjoy it.  We’re just trading time later for time now! 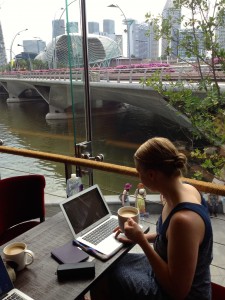 Improving my Rails skills at a Starbucks in Singapore

Will we get bored?  Sometimes, yes!  A person can only visit so many Wats (Buddhist temples) in Thailand, castles in Europe, or beaches in Bali before they all start to look the same.  This may sound like blasphemy, but traveling full-time is not awesome; we both had travel fatigue after spending just one week in Singapore.  Our best advice is to slow your travel way down, try to spend at least a month in each of your destinations, and get into a routine.  Become your own project manager.  Make your time abroad a time of intensive learning and set some goals – this will combat boredom and give you a sense of purpose.  My goal is to become a full stack web developer, so I’m currently working on my Ruby on Rails skills.  Kevin and I are both improving our HTML/CSS skills.  Kevin is kicking butt at several different projects in the iPhone app development world.  We both have resolved to always be reading both a fiction and nonfiction book.  We have very quickly figured out that if you place your focus on learning with travel as a secondary focus, you’ll never get bored.

Will this kill our careers? Hopefully not!  Because we’ve both resolved to learn so much during our year abroad, we are hoping this year will be a selling point to employers when we return to the States and start looking for jobs.  I mean, if you can pair program with your spouse, you can probably pair program with anyone, right?  We’ll be sure to put up a follow-up post on this particular topic after moving back home.

Not many people know that our idea of moving abroad actually hatched in the Summer of 2010, just a couple months after buying our home in Seattle, and before we even got married.  It’s funny how doing something to anchor yourself in one location (like buying a house) can make you want to run away!  When we came up with this crazy idea, I actually set a calendar reminder for May 2013 that was titled “Seriously consider moving to Thailand.”  (The reason we waited 3 years is because we didn’t want to have to pay back the massive $8,000 first-time homebuyer tax credit we got when we bought our house!)  In May 2013 when that calendar reminder popped up, we both sort of laughed it off as just another one of our crazy ideas from the past, and went on with our lives. 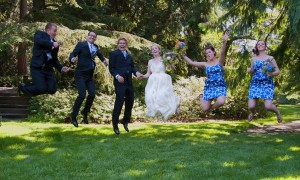 It turns out that the idea actually took root and began to grow, nourished in part by the ideas we read about in Tim Ferriss’s book The 4-Hour Workweek.  So we planned a super secret 3-week reconnaissance vacation to Southeast Asia in November and December of 2013, and we visited cities in Vietnam and Thailand with a “could we live here?” mindset.  We decided that Chiang Mai was a great spot to start our time abroad because of the low cost of living, the friendly Thai attitude, and the big expat community. 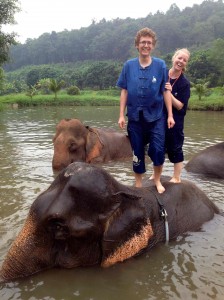 After our vacation ended and we knew that we’d be able to handle living in Southeast Asia, we were faced with actually making the decision of whether or not to move overseas.  We agonized over the decision, we made pro/con lists, we read books, we subscribed to expat podcasts, we talked about it nonstop with each other until we were blue in the face.  Eventually, we set a deadline (New Year’s Day) and made our final decision to move overseas while we were walking around Greenlake.  Now that we’re here, we’ve realized that a lot of the things we cared about were materialistic things that don’t really matter in the long run, and that we should’ve made the decision to move much earlier!

We want to hear from you!

We’re always looking for blog post suggestions!  Leave us a comment with any topics you want to hear about, especially if you’re getting tired of all the food pictures I’ve been posting lately.

3 thoughts on “Overcoming Your Fears Of Moving Abroad”