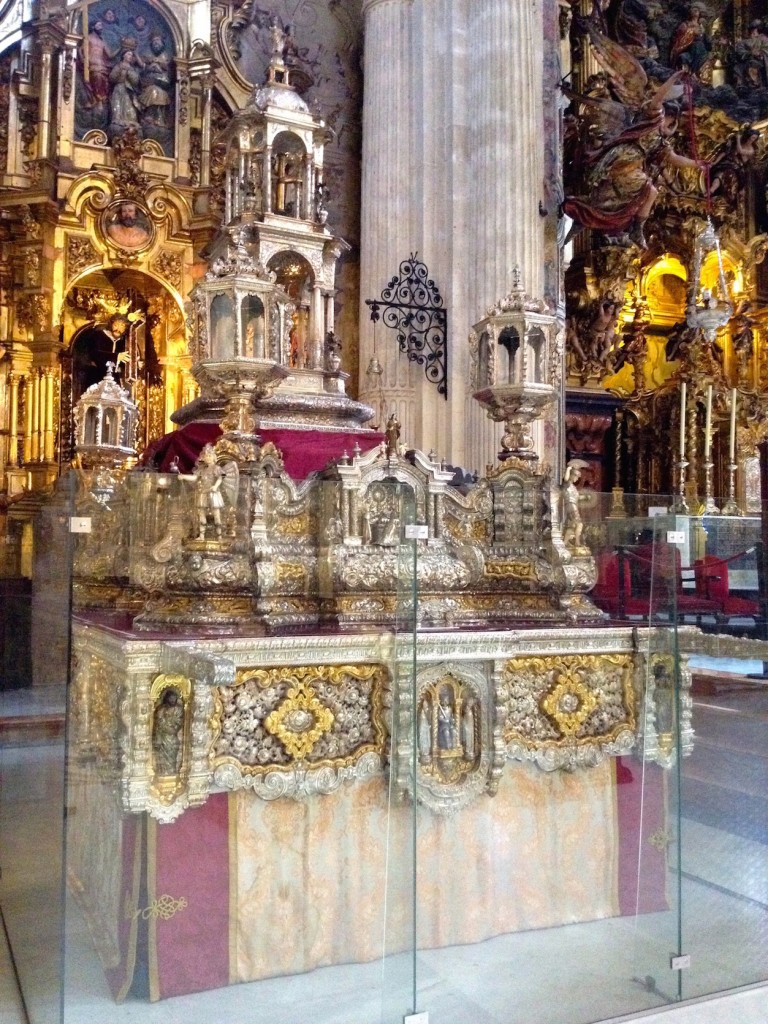 One of the floats used in the Holy Week Parades here in Sevilla. In the “off season”, this one lives at the Church of the Savior.

Sevilla, Spain has an absolutely fanatical parade culture. A few nights ago, Kevin and I were having dinner and heard some woodwinds playing outside our 2nd floor apartment window. We popped out onto the balcony and saw a parade float slowly making its way past our window carrying a statue of Christ’s crucifixion! What a surprise. 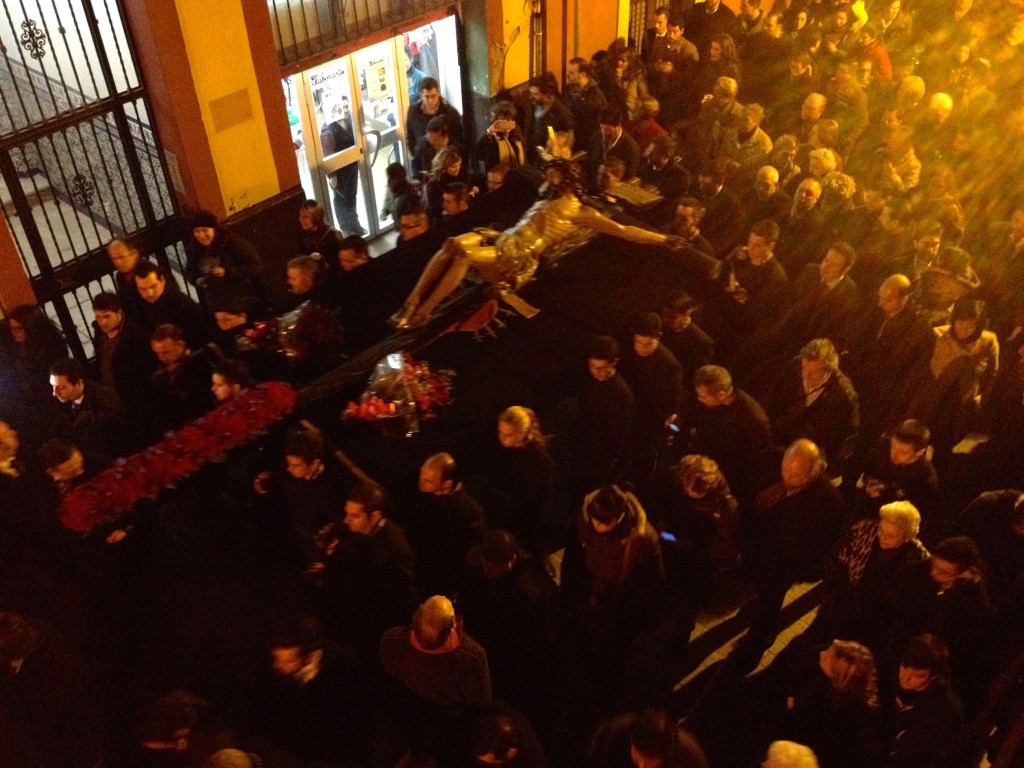 Christ, as viewed from our balcony.

This is just the tip of the iceberg when it comes to Sevilla’s Parade scene. We’ve been in this lovely city now for a month, and have seen no less than four parades. You can almost taste the energy that has already started building for Sevilla’s big parade extravaganza during Holy Week. For the entire week between Palm Sunday and Easter, 60 neighborhood groups (called hermandades or cofridías) parade from the churches in their neighborhood’s to Sevilla’s cathedral with floats decorated in some aspect of the events surrounding Christ’s crucifixion.

No Pickup Trucks to Be Found Here

Parade floats here are a lot different than floats back home. Instead of a Ford or Chevy pulling a big flat-bed trailer with wheels, the floats here are CARRIED by groups 30 to 50 men! The floats for holy week are incredibly ornate, and ridiculously heavy. Some floats weigh in at two tons! They’re decorated with flowers, candles, gold, silver, and usually carry a statue from one of Sevilla’s many churches.

These big groups of men have started training for this year’s holy week. Because the parades occur every day, sometimes for up to a dozen hours, it’s really an athletic endeavor. The float bearers all wear towels on their heads to cushion them from the crushing weight of the floats, and they typically switch out carriers every 20 minutes. But some men carry the float until they collapse as a way to prove their deep faith.

Our Peek at Holy Week

We feel like we got a little peek at what Holy Week in Sevilla is like. When we heard the woodwinds playing the other night and ran out to watch, a religious parade was out in full force. Dozens and dozens of people led the parade, carrying huge wax candles that are as tall as they were! During Holy Week, the people carrying candles are called “penitents”. They wear hooded robes to keep their identities anonymous, and walk in the parade carrying candles (and sometimes even crosses) to perform their penance publicly. They weren’t hooded in our parade, because I’m pretty sure it was just a “rehearsal” parade for Holy Week. 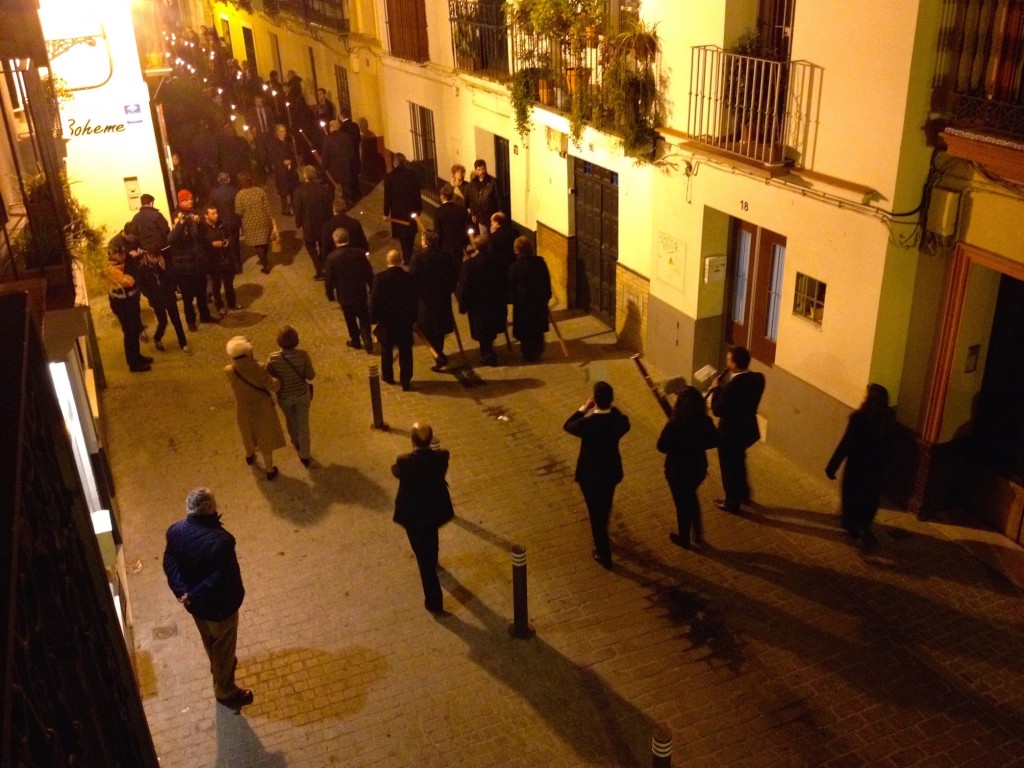 After the penitents came a line of clergymen. Some of them were carrying thuribles, which is the container used to burn incense and releasing the smoke. (Someone correct me if I’m wrong. I grew up Methodist.) Our apartment smelled like incense for HOURS. I think it added to the experience. 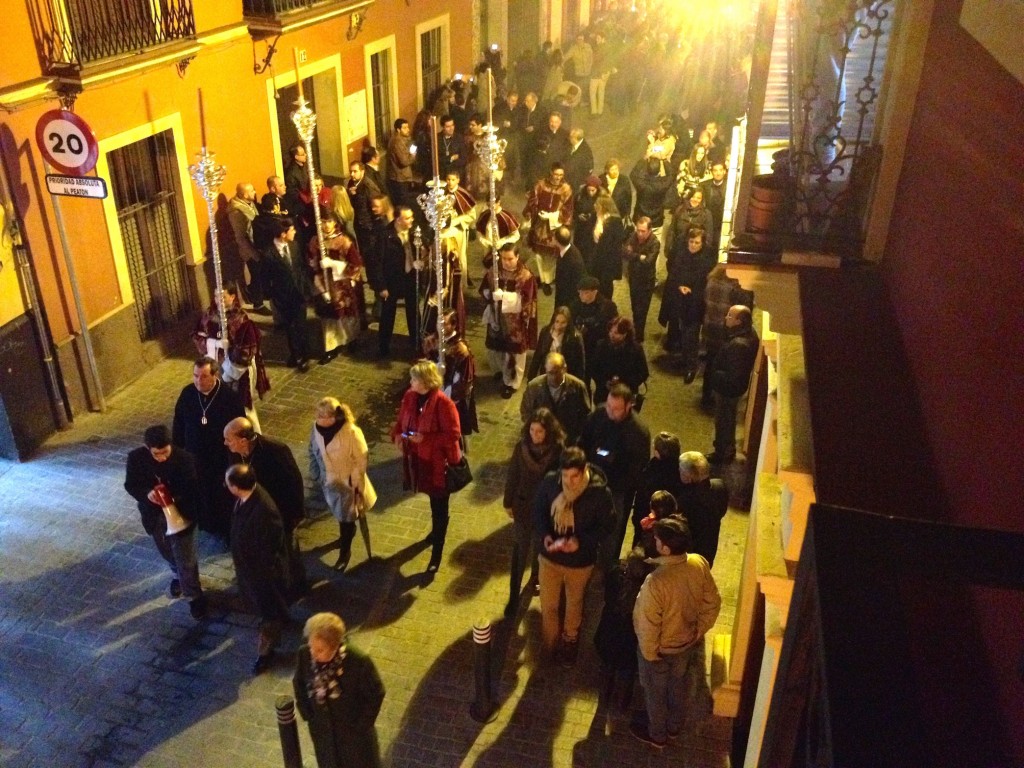 Some of the Clergymen in the Parade

Finally, the star of the parade came by: a float carrying a statue of Christ’s crucifixion. It is NOT what I expected to see from my window on a Saturday night. And I’ve seen a lot of things from our window. Groups of young Spanish kids that all look like the spitting image of Justin Beiber? Sure. The same sassy woman pulling a roller bag who is ALWAYS yelling at one of our neighbors? Yes. Random flamenco musicians walking past at midnight strumming on their guitars? Happens all the time. Vans full of nuns? To my delight, this is a regular occurrence. But a statue of the crucifixion now takes the cake. It was an honor to witness part of Sevilla’s wonderful religious traditions – how lucky we are! 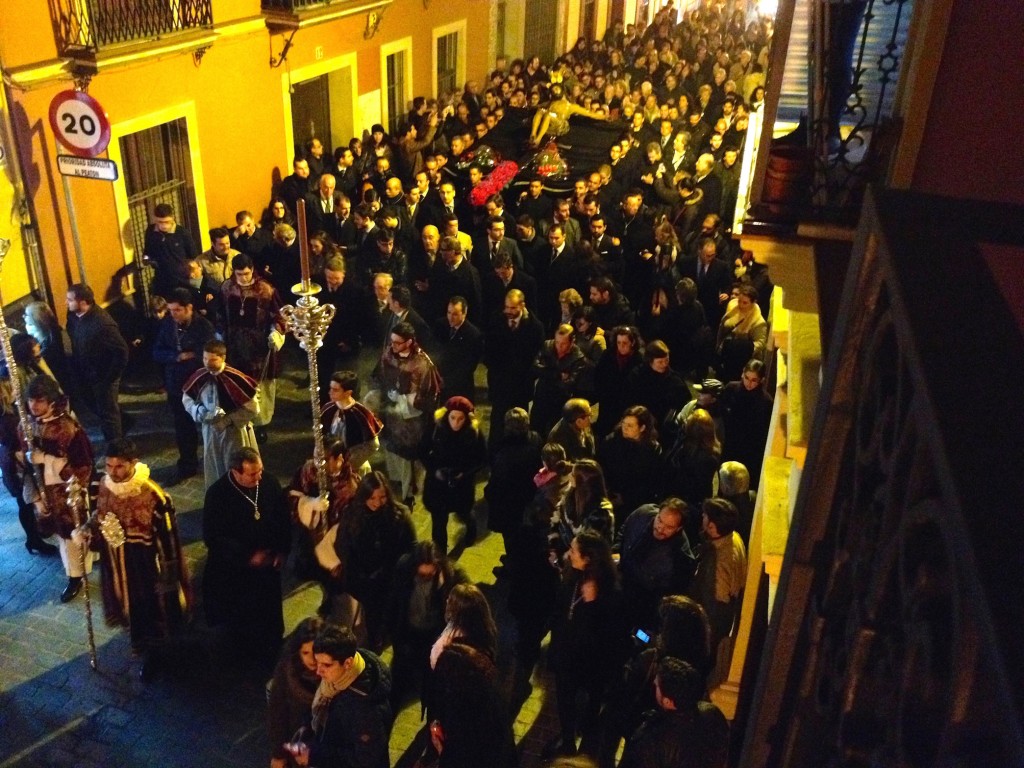 The Parade Passing our Apartment 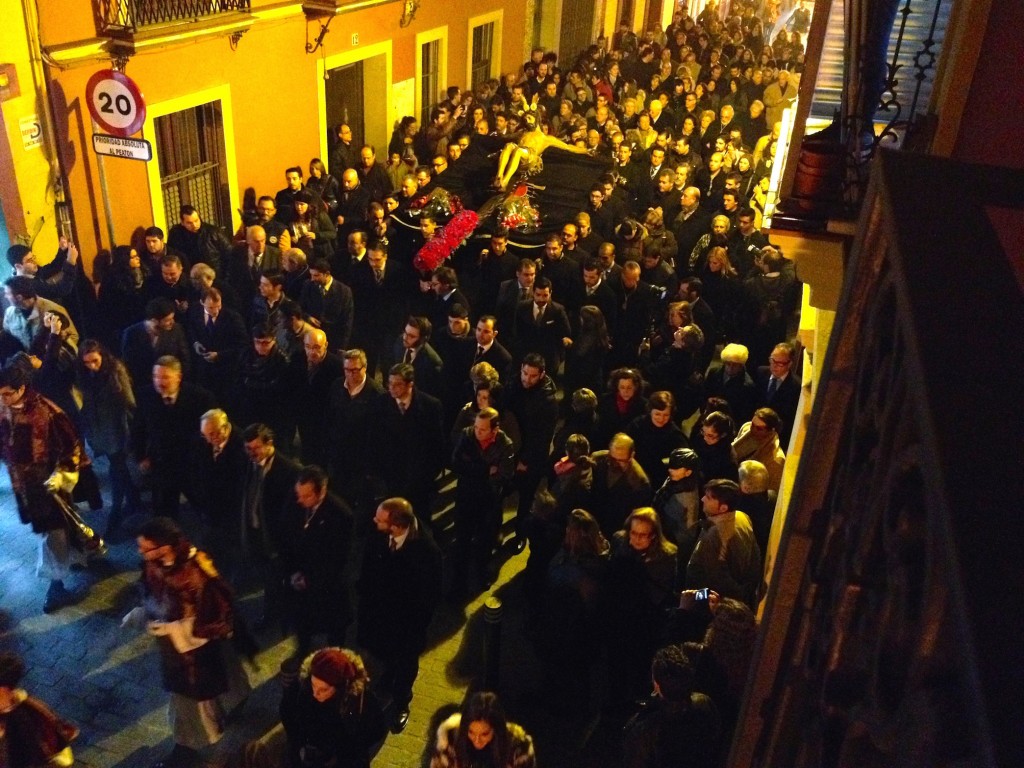 We’ve seen big groups of men training/rehearsing for Holy Week several times now. Check out the photo below of the group that came by our apartment just this past Sunday. By my count, there are 30 men carrying that float. They added weight by piling cement beams on top of the float. Look at the towels they use to cushion their heads. They were playing music so that they could all march in perfect unison to the beat. What dedication they have! 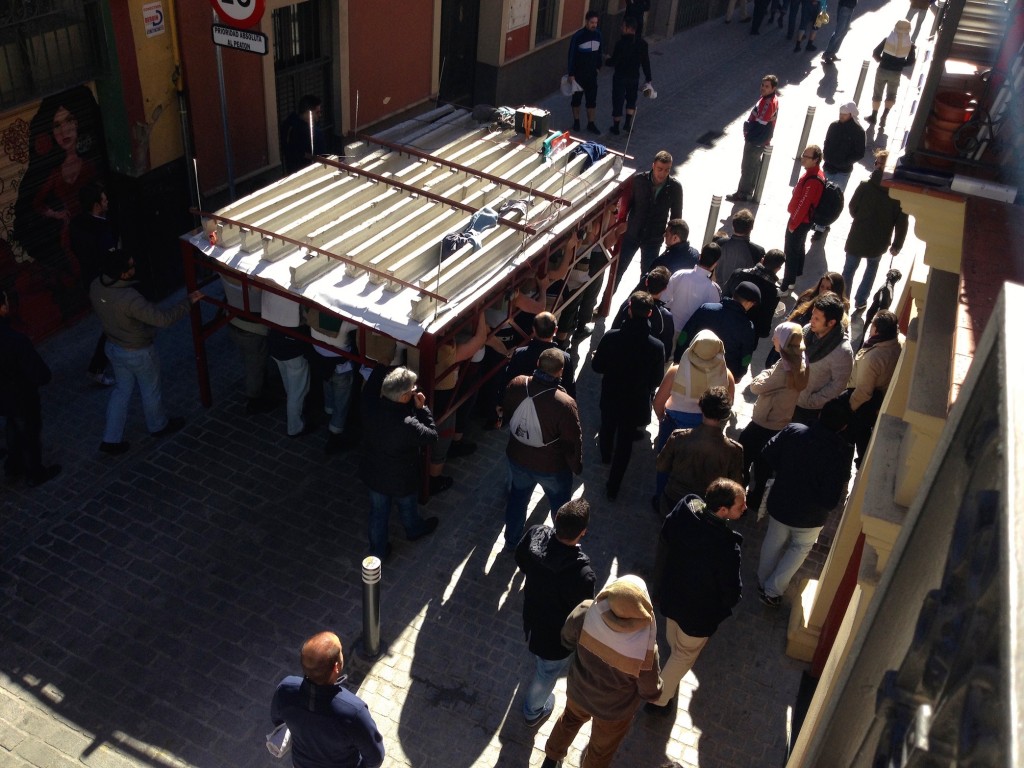 Parade Practice! The training float is topped with cement beams to weigh it down!

Another night, we saw people practicing at midnight! This time, they were using an actual parade float, but most of it was hidden by a white sheet. 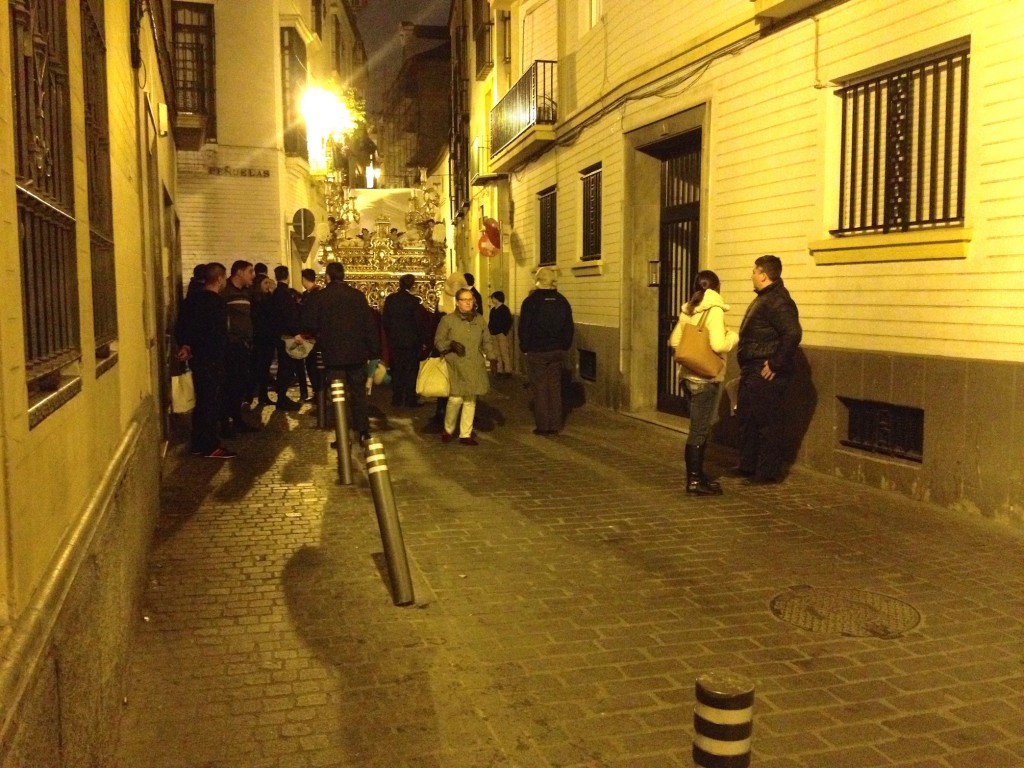 The Parade Rehearsal is coming right down our street!

We’ve fallen in love with this city for a lot of reasons, and parade culture in Sevilla is definitely part of that. Our first morning in Sevilla, a small parade came right by our apartment and they threw candy to us as we watched them from our balcony! What a fun welcome to Sevilla! Free candy is a guaranteed way to steal my heart. A Parade for the 3 Magi went past our balcony the first morning after we woke up here in Sevilla. What a treat! But the thing I love most about the parade culture here is the sense of community that comes with it. Families fill the streets during these parades – grandparents, great-grandparents, toddlers and babies. Men who have known each other since they were kids carry the floats together, perfectly in sync with one another. Everyone carrying the float shares part of the 2,000+ lb weight. I’ve been so surprised we got to witness that part of Sevilla in January, but I’m so glad we did! 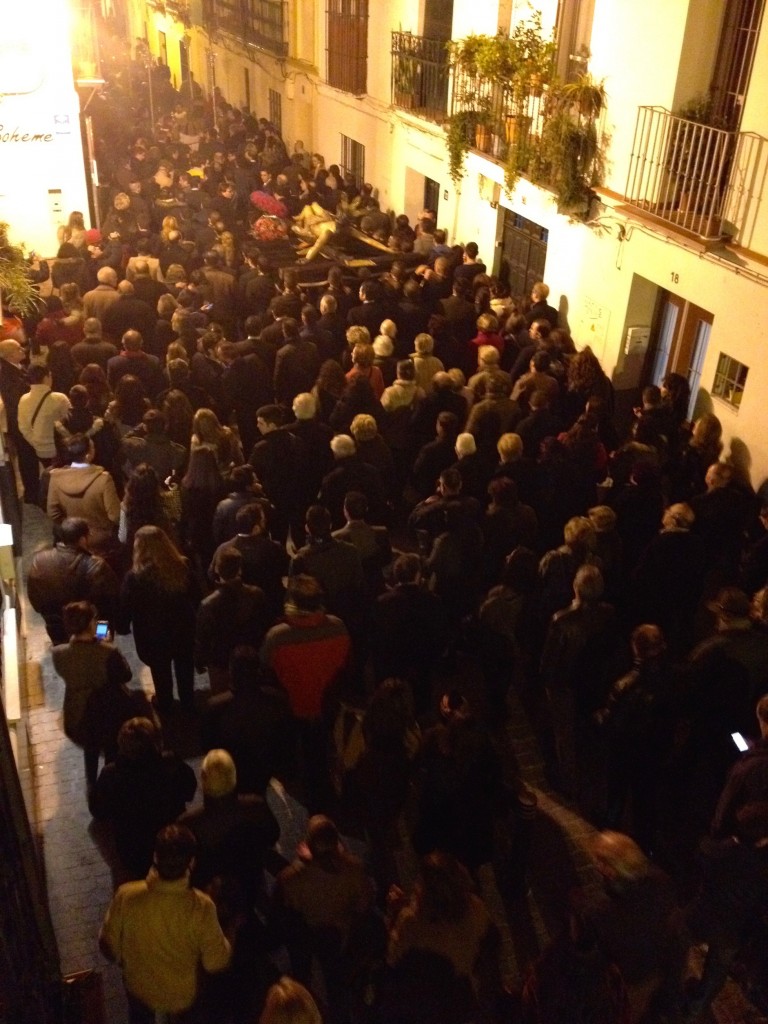 Look how packed our street was for just this mini-parade! Wow!