I love Indian food SO MUCH.  I love it more than cake, more than sweet corn, more than ice cream, even more than home baked wheat bread.  So when we stumbled upon a neighborhood called Little India during our recent 1-week trip to Singapore, I became a little attached to it.  We went out to eat for 11 meals during our recent weeklong trip to Singapore, and a whopping 6 of those meals (SIX!  OVER HALF!) were in a little slice of Heaven called the Tekka Centre in Little India.  It was like angels were dancing on my taste buds, for realsies, and I loved every minute of it.

In order to control the street food scene that is so much a part of Southeast Asia, Singapore has organized its food vendors into food centers more commonly known as “Hawker Stalls”.  In my opinion, the Tekka Centre is the best – about half of it is Indian food, and the half of the stalls are more of the Chinese food persuasion.  There is ONE RULE you need to follow when you dine at any of Singapore’s Hawker Stalls – go where the locals go.  Never try an abandoned food stall – pick the longer lines and order what the locals order! 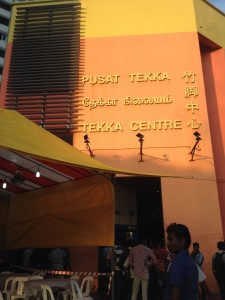 To get to the Tekka Centre, just hop on Singapore’s phenomenal subway system called the MRT and get off at the Little India stop.  Follow signs to the Tekka Centre from there, or a friendly local will point you in the right direction if you get lost.  Tip: use the bathroom at the subway station!  It costs money to use the one in the Tekka Centre! 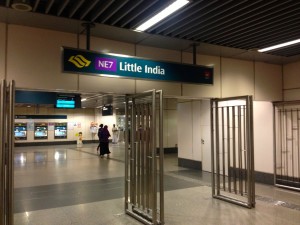 Inside the Little India MRT Station

From what I gather on the interwebs, Indian food in the US tends to be more like Southern Indian cuisine, while in Singapore it tends to be more Northern Indian. (It’s entirely possible I made that up, but I really think I read that online somewhere…) In Chiang Mai, Indian Food tends to be overpriced and underflavoured – we tried a Shahi Korma at one spot last month that reminded me of melted Velveeta nacho cheese, and the Naan there was an absolute joke, so that was a bust. But we were not disappointed in Singapore, and enjoyed trying some North Indian dishes we’ve never seen on menus in Seattle. Here’s a peek at what we tried out:

We tried something we’ve never seen before, a drink called “Special Chendol.”  It’s a milky style drink, with lots of green jelly called “Chendol” in it.  We didn’t really care for it – I felt like I was slurping up worms, but it was fun to try. 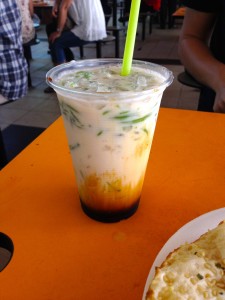 We sucked down as much Masala Tea as possible at the Tekka Centre.  We had at least one at every meal.  I also really enjoyed the Teh Tarik, which is similar to Masala Tea but with a more chocolatey twist – I think they put Milo in it.  Also, it was just S$0.80 for Teh Tarik – bargain city! 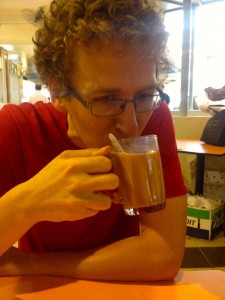 We have a naan guy in Singapore now.  That’s right, we cozied up with the guys at Pak Kashmiri Delights, the hawker stall that specializes in Naan and Curries, and I learned that the stall owner lived in Connecticut for 12 years!  He doesn’t look very happy in the photo below, but he was actually very friendly in person. 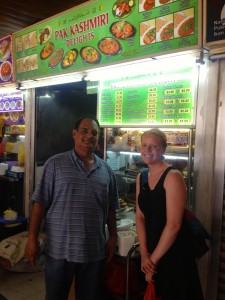 Our Naan Guy in Singapore

We ate a lot of Naan in Little India.  I really enjoyed how they made the naan – they have a wood-fired naan oven.  They press out the dough, lay it on their thick round potholder, and press it on the inside oven wall.  Once it’s cooked, they use metal prongs to pry it off and pull it out.

The naan guys also made a mean curry.  We had Butter Chicken with plain naan and garlic naan: 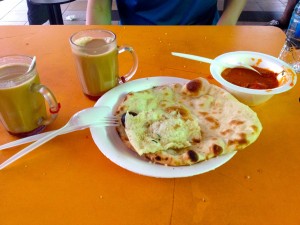 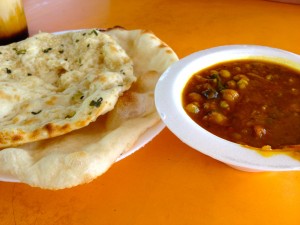 And we tried their Aloo Ghobi (vegetable curry) with plain naan: 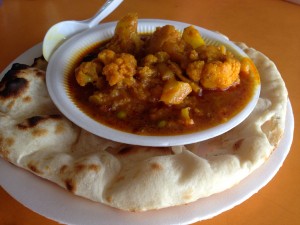 The Naan guys also had a pretty tasty Tandoori Chicken we enjoyed: 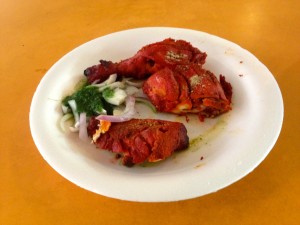 We also discovered Prata, which we’ve never seen before!  The first guys we went to for Prata were at the Shariff Stall.  We enjoyed their plain prata with their delicious tomato-gravy-curry dipping sauce so much that we got it two days in a row:

We also tried a Mutton Murtabak from the Ar-rahman Royal Prata stall.  Mutton Murtabak is egg, onion, ground seasoned mutton, and peppers inside an enormous prata dough, served with dipping curry.  It also can be ordered with chicken, but we were trying to be adventurous:

Our journey through Tekka Center wouldn’t be complete without one indulgent dessert.  We ordered up a Banana and Chocolate Prata from Ar-rahman Royal Prata.  Delicious, sinful, greasy goodness:

We discovered a dish called Nasi Biryani at Tekka Centre and loved it so much we got it three times.  According to the internets, it looks like this dish is heavily influenced by Malaysian food culture, but the spices and flavorings still made it taste like it should fall in the Indian Food category. 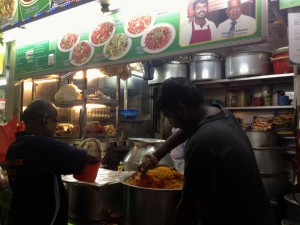 These are our Nasi Biryani guys – theirs is the BEST. 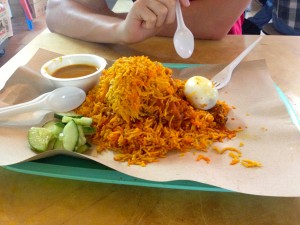 Chicken Nasi Biryani. All this food for S$5!

On the last day, we tried it with Mutton.  Mutton Nasi Biryani was the best dish we had during our whole trip to Singapore! 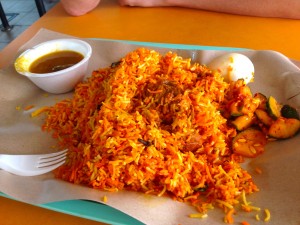 Mutton Nasi Biryani, also S$5.  If you’re in Singapore, do not miss this dish!

We enjoyed a couple other dishes that seem like an Indian twist on Malaysian food.  First, we tried Nasi Goreng, which was sort of a Fried Rice dish with spices commonly found in Indian food.  We both really enjoyed this dish – pretty light and delicious. 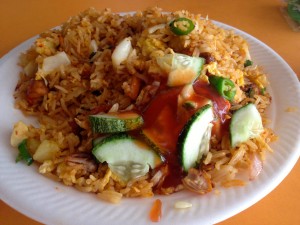 The other “Goreng” dish we tried was Mee Goreng, which looked a lot to me like cut up spaghetti noodles.  I was skeptical, but all the locals seemed to be ordering this dish so we gave it a try.  It was really tasty, but we liked Nasi Goreng better! 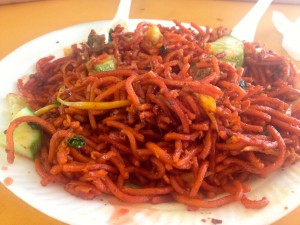 Where have you tasted your favorite Indian food?  Have you been to India?  Should we put it on our travel wish list?

4 thoughts on “Singapore’s Little India, A Love Story (or, a Food Story?)”