I won’t lie, I’m not the biggest fan of Bangkok. I’m a small-town girl at heart, so I tend to avoid huge cities unless I have a very specific reason to visit. I dare you to plan a trip to Bangkok and not get overwhelmed with its sheer size and array of things to do. CAN. NOT. HANDLE.

Aside from being so huge and intimidating, Bangkok is also a full-on assault on your senses. The sights, sounds, and smells are intense. I’m not sure there’s anywhere else in the world where you can be awoken by a rooster outside your hotel room window at five in the morning when you’re in the middle of an urban metropolis with a population of over 6 million people. They filmed a Hangover sequel here for a reason, guys.

But in the midst of the craziness, we managed to find a few things to do that we really enjoyed. We put together a few tips to help travelers survive a trip to Bangkok on a Budget. Safe travels, friends!

Visit the Grand Palace As Soon as it Opens 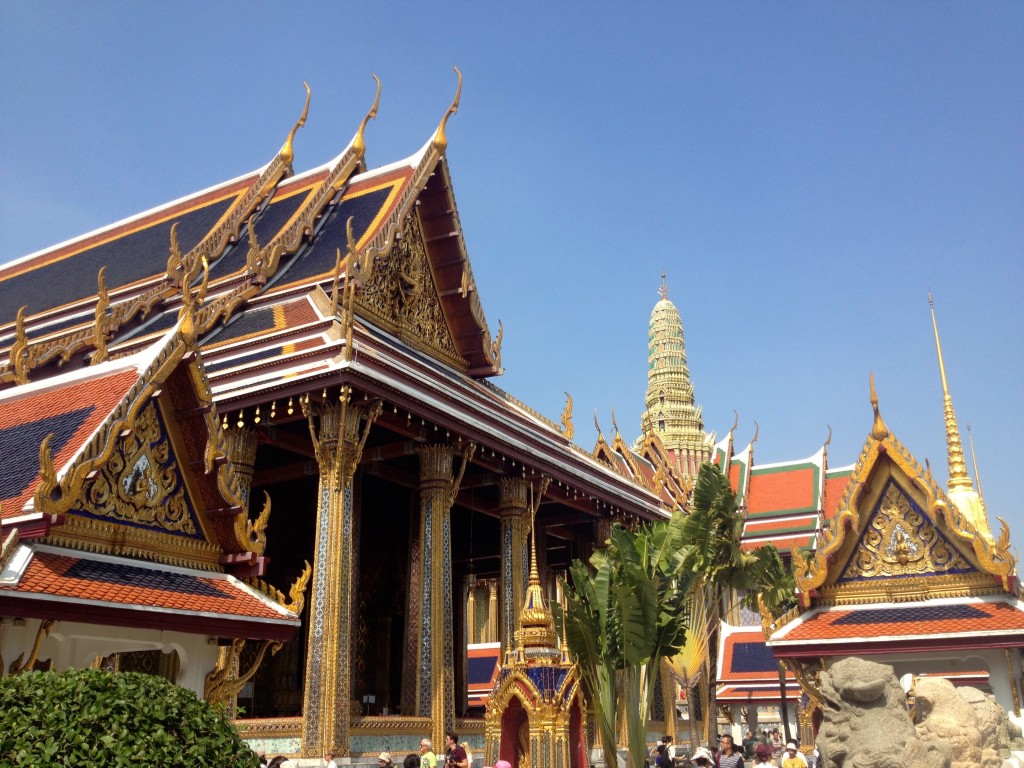 The Grand Palace in Bangkok

We made a huge mistake. We went to visit the Grand Palace, one of Bangkok’s most popular attractions, but we didn’t arrive until after 11am. DO NOT DO THIS. If I had to imagine Hell, it would’ve been close to what we encountered when we arrived. The tourist busses had shown up in full force, and the crowds were thicker than molasses on a cold evening during a harsh Canadian Winter. Women were walking around everywhere with umbrellas to shade them from the burning sun, paying no attention to whose eyes they were poking (spoiler alert: it was mine and Kevin’s). 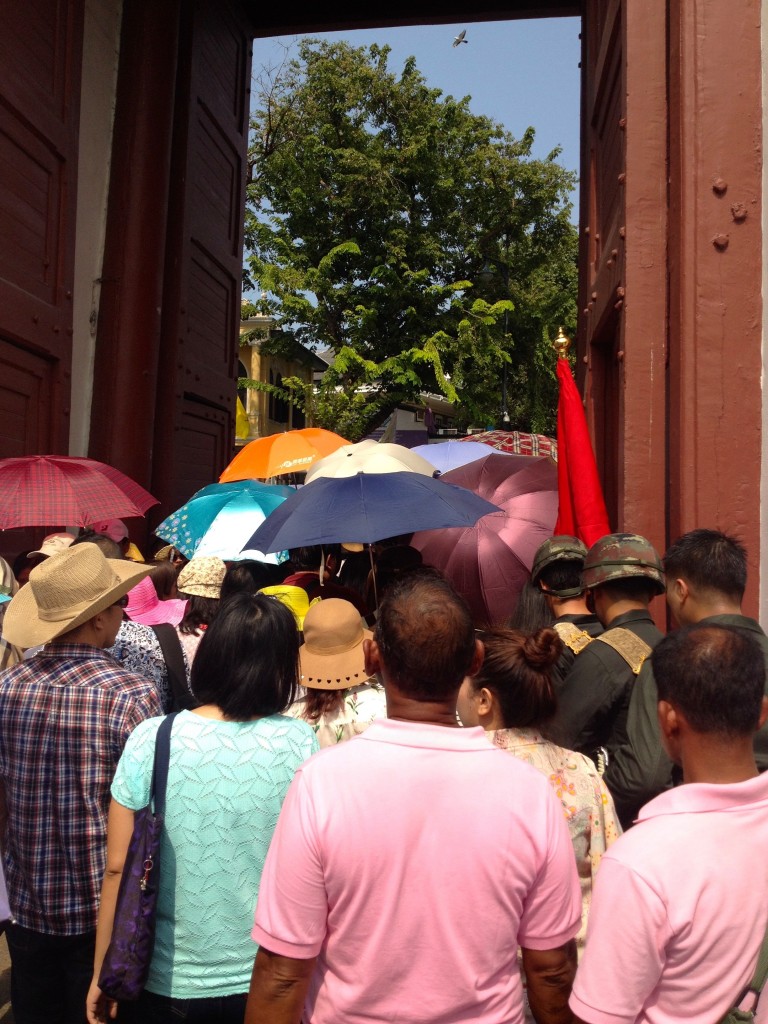 THIS IS MY WORST NIGHTMARE.

It was so damn hot I almost couldn’t handle life. To add insult to injury, I had planned to cover my arms with a scarf to abide by the strict dress code, but that’s not allowed. I had to rent a scratchy, extremely flattering button-up shirt, which was really fun. 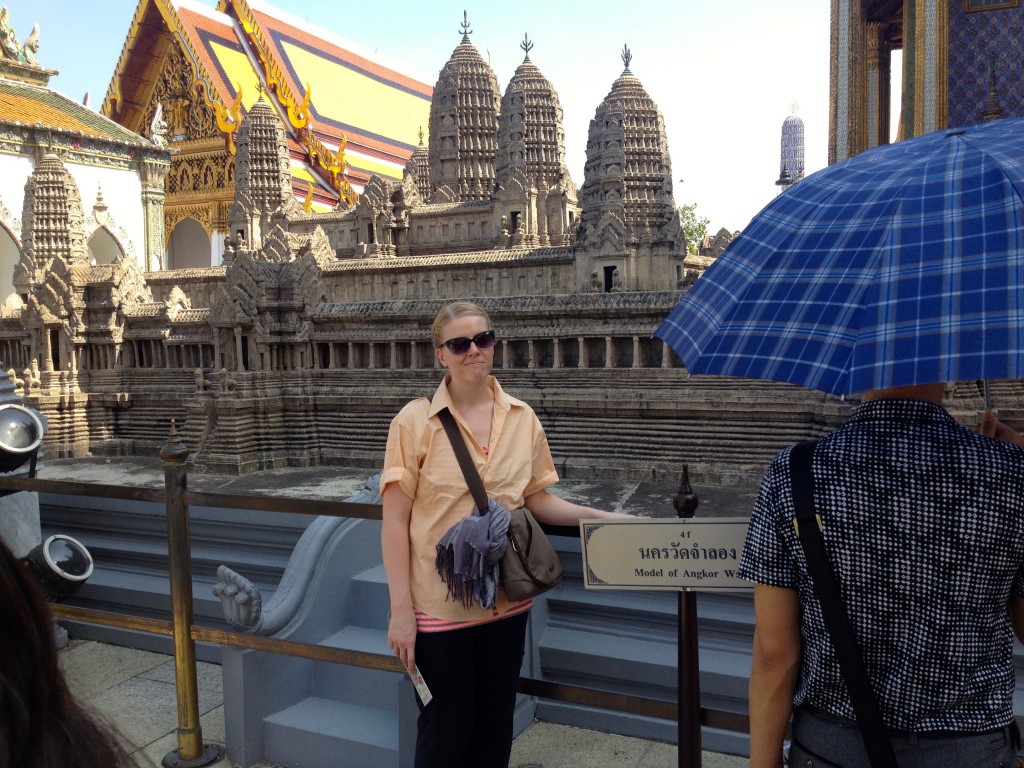 How Awesome Is This Button up Shirt? Right? Right???!

All jokes aside, the Grand Palace, though expensive at 500 Baht (or about $15) per person, is a must-see in Bangkok. It’s super fancy since it has been the official residence of the Kings of Thailand for over 200 years. The palace is ornate, opulent, sparkly, magnificent, glamorous, ostentatious, palatial, even gaudy. (Isn’t thesaurus.com great?!) 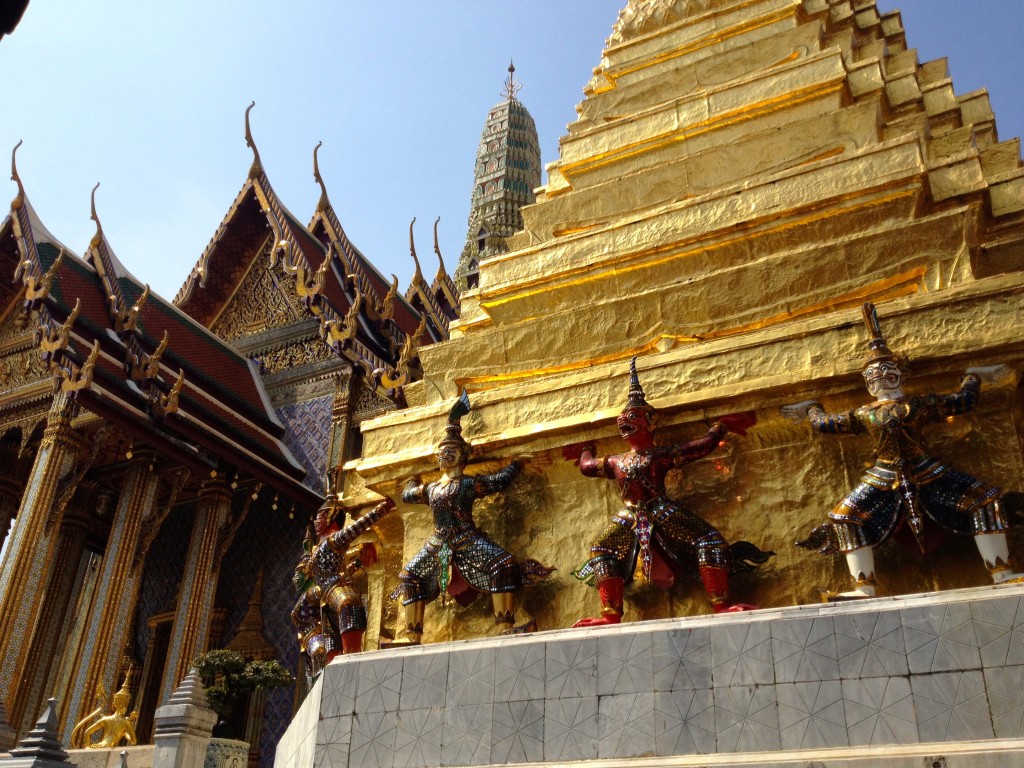 These Statues Were Really Holding down (or up?) the Fort at the Grand Palace. 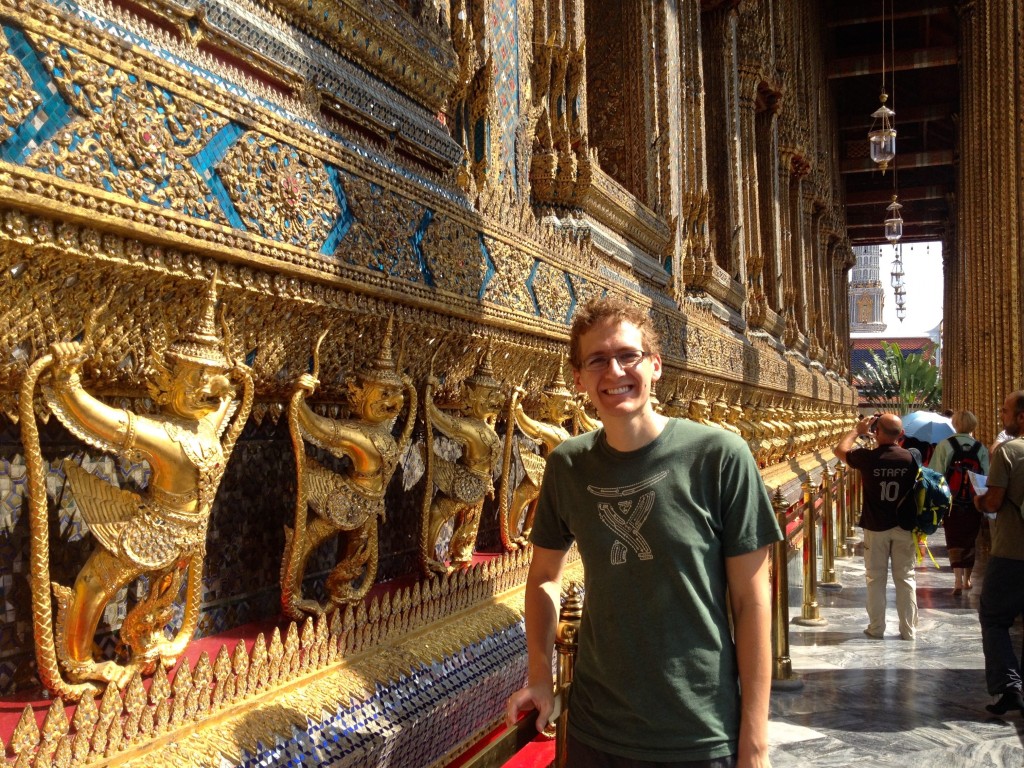 So Much Sparkle in One Place! 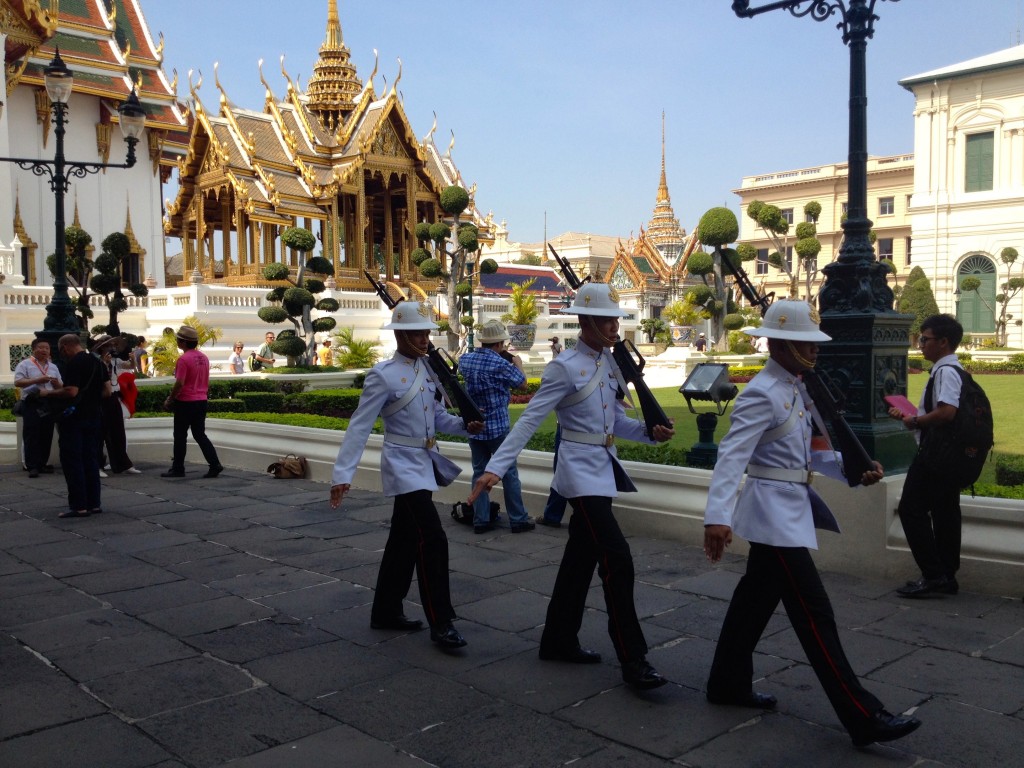 Pro Tip: Don’t Aggravate the Guys with the Bayonets.

We almost fell for one of the oldest scams in the Thailand tourist book. We had heard that near the Grand Palace, tourists are regularly approached by helpful people who inform them that the Grand Palace is closed for a special event, and kindly help them find some other attraction to spend their money on until it reopens. (I think these people must get a commission if you spend money on a tour or something.) This scam is so common that an audio loop is played over the loud speakers outside the Grand Palace saying that it ALWAYS open daily from 8:30am to 3:30pm.

We were headed to the BTS Skytrain station to head up to the Grand Palace all the way out in the Silom neighborhood when a “policeman” struck up a conversation with us. He told us the Grand Palace was closed for prayers today, suggested we take a private canal tour, and even showed us his “badge”. He helped us grab a Tuk Tuk to the pier for just 30 Baht. We accepted, thinking it would take us to the same pier the water taxi uses, plus that’s a cheaper Tuk Tuk ride than we could ever negotiate. Alas, we were fools. 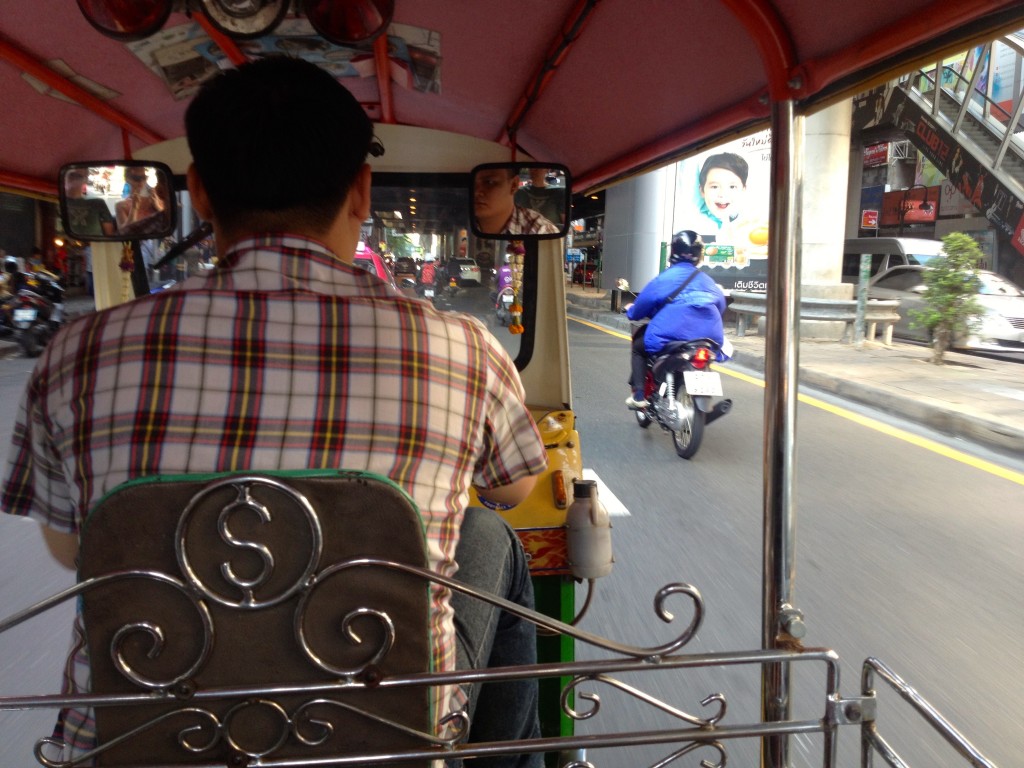 Our Scammy Tuk Tuk Ride. SUCH a Bummer.

The Tuk Tuk driver took us to a private pier for private boat charters, and they wanted $75 for a 1-hour ride! If we didn’t already know that the tourist boat pier was only a block away, we wouldn’t have known what to do. And that’s how we nearly got scammed in Bangkok. It’s a shame, too, because I really don’t want to be one of those tourists who think everyone’s out to get them. It’s sad that these types of things happen so often.

Use the Water Taxi

There are two types of water taxis in Bangkok, the tourist boats with a blue flag (40 Baht per ride, or 150 Baht for a day pass), and the local boats with an orange flag (15 Baht per ride) that run up and down the Chao Phraya River. (Pro tip: at each pier, there are also usually actual Tour Boats that are a lot more expensive! Look around and ask multiple people for directions to make sure you get to the right place!) 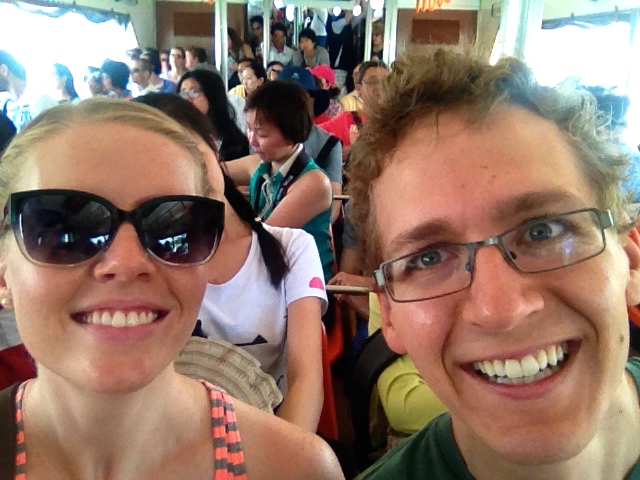 Here We Are, Enjoying the Water Taxi Boat. It gets pretty busy at about 11am!

We liked the tourist boat because, well, we are tourists, and there was a “guide” pointing out various attractions as we passed them. It’s also nice to have someone announcing “If you’re going to the Grand Palace, get off here”. I always enjoy when things are idiot proof, especially because the pier names have nothing to do with the attractions near them. 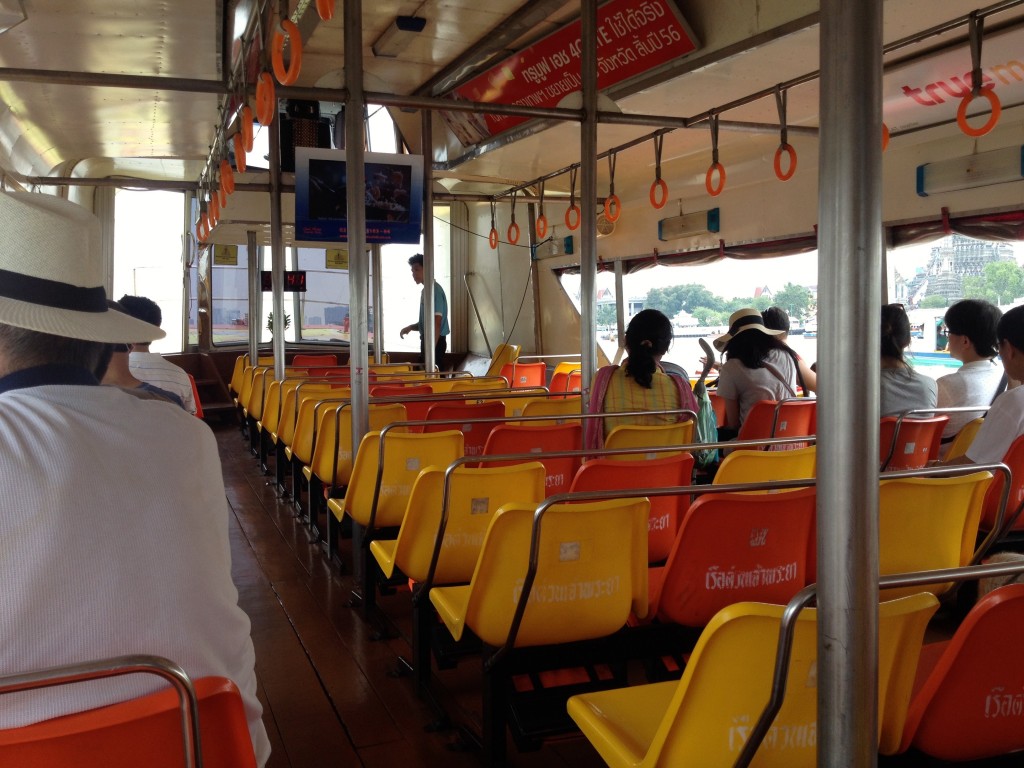 Here’s what we recommend to Bangkok tourists. On your first day, make your way down to any tourist boat pier, and just spend a couple hours riding the whole route. It’ll help you get oriented to many of Bangkok’s sights, and it’s just fun to be out on the water. I’m not sure if they kick you off and make you buy a ticket at each end of the boat route, but at 40 Baht/ride, it seems like a steal to me for a river tour. 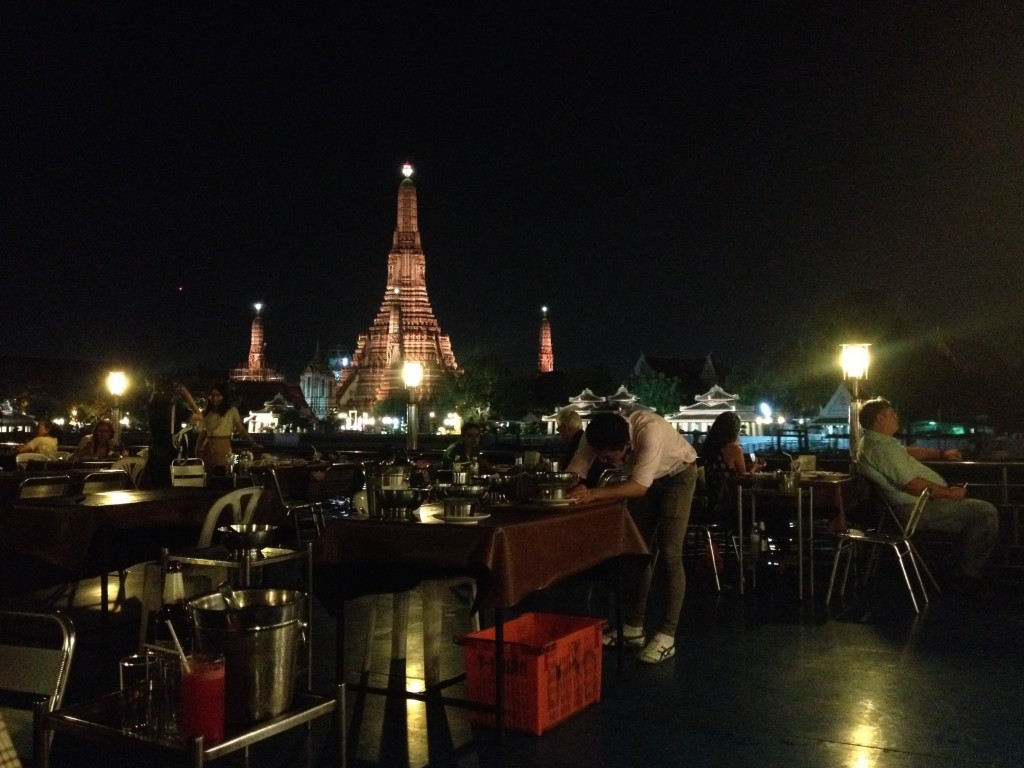 The View from Our Yok Yor Dinner Cruise Boat

It’s no secret that we now fall into the budget-traveler category. When you’re traveling as long as we are, there are no more splurges to be had. Your dollar just needs to stretch further. So when I discovered that most Bangkok dinner cruises cost upwards of $50/person for a buffet dinner that didn’t include alcohol, I was sadder than a kid on Christmas morning who only got a lump of coal.

Enter Yok Yor Dinner Cruise! I found this little gem on another traveler’s blog. Yok Yor is a local seafood restaurant which recently started running cruises, too. They serve food from their regular menu, and you just order a la carte. A 160 Baht/person boat fee is tacked onto your food bill. While still a bit expensive (we blew about $28 for a big beer, a curry dish, pad thai, rice, and water, plus boat fees), it’s the cheapest dinner cruise you can find, and the food was actually pretty tasty! 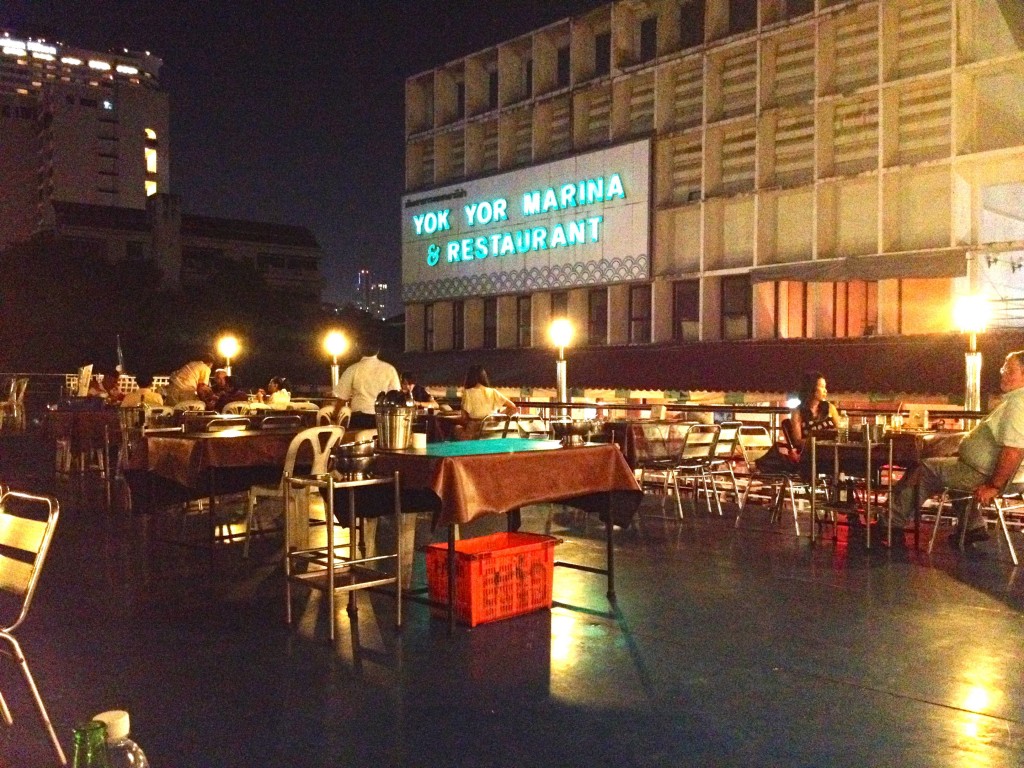 The Cruise Boat Docks by the Yok Yor Marina & Restaurant

Be warned, though, if you’re averse to Thai Karaoke, this is not the cruise for you! Most of the other folks onboard were local Thai people out celebrating something; there were two birthdays on our boat! 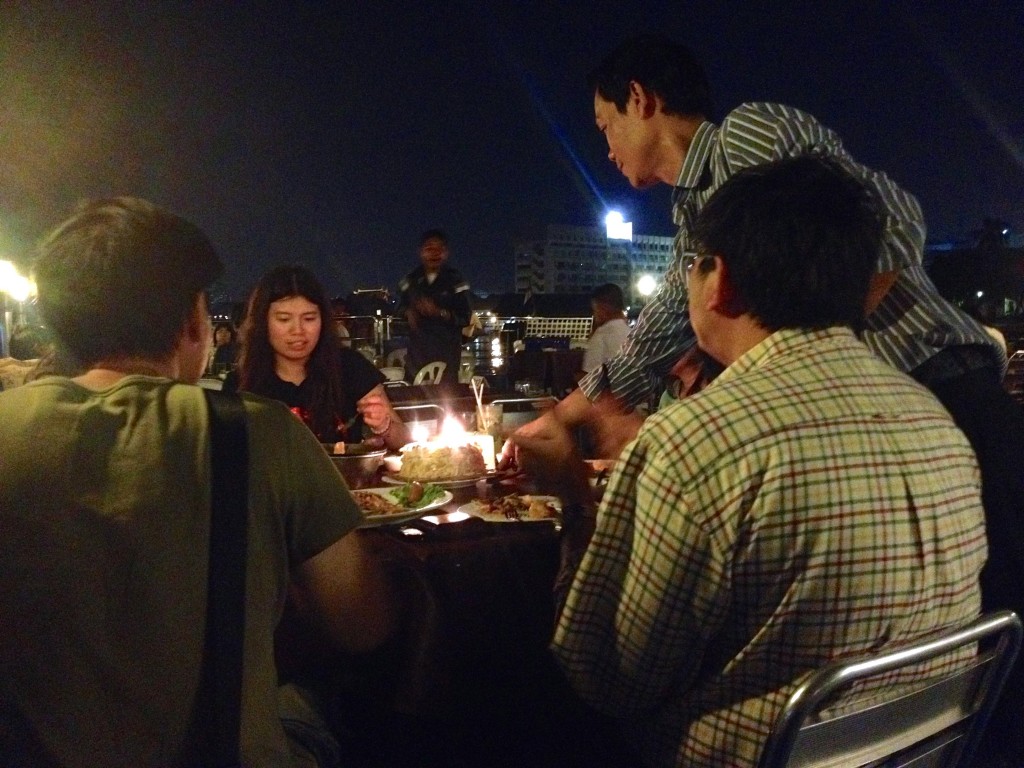 A Birthday on the Yok Yor Dinner Cruise!

To get to the Yok Yor Boat, we took the BTS Skytrain to the Saphan Taksin station, then walked down to the ferry pier. A Yok Yor employee was standing at the pier with a sign around his neck that read “Yok Yor Dinner Cruise”. Let him know you’re here to take the free ferry to the cruise, and he’ll radio for their boat to come whisk you away. They ask that you arrive at their restaurant no later than 7pm, so we showed up to the ferry pier at about 6:30pm. The cruise begins at 8 and goes until almost 10pm. 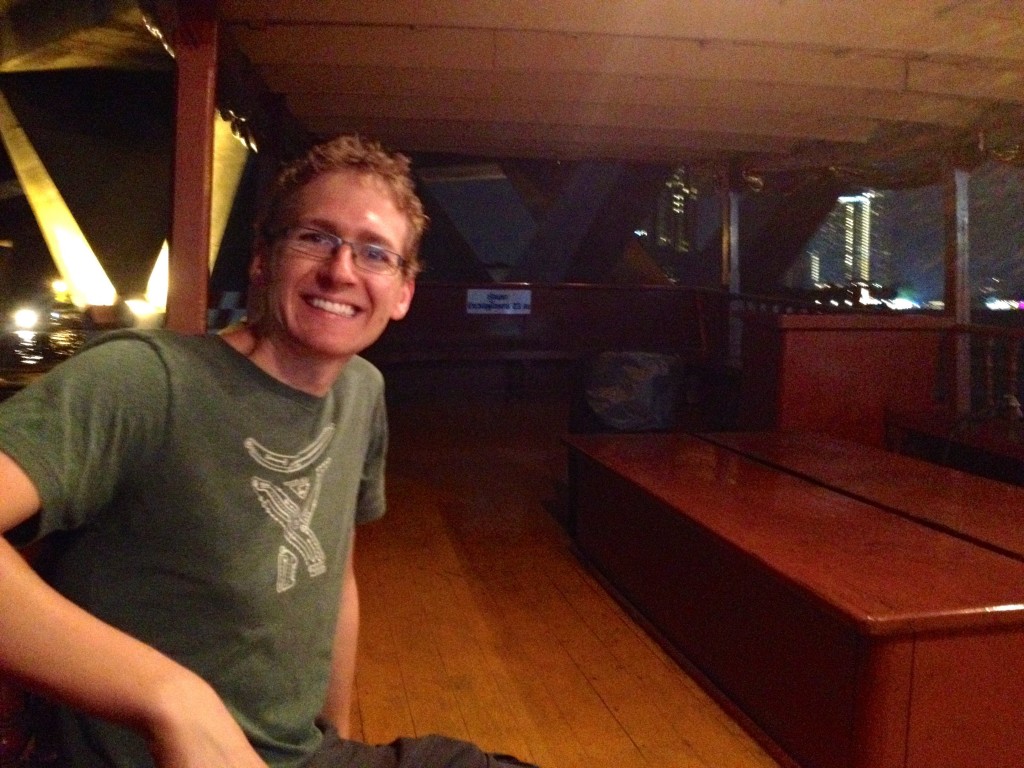 Reservations are advised; we recommend calling the number on the Yok Yor website to reserve a table. Don’t even try the online form, you’ll only be met with sad, bitter silence.

Get a Hotel with a Pool 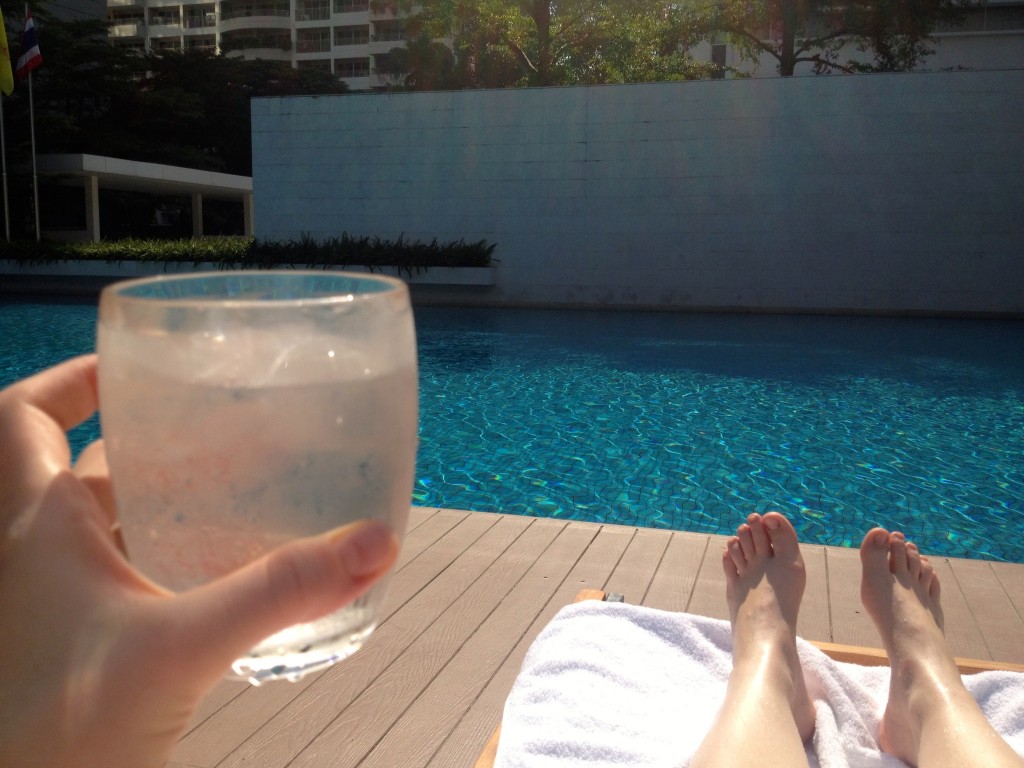 Trust Me. You’ll Want a Pool.

Bangkok is HOT. Now that it’s “Winter” in Chiang Mai and temperatures usually don’t climb out of the 80s, I forgot what it feels like to be drenched in sweat ALL OF THE TIME. Bangkok is quite a bit further South than Chiang Mai, but I think part of the intense heat is just all of the cement soaking up the sun all day. I was miserable. We recommend getting a hotel with a pool so you can see the sights in the morning and lay by the pool in the afternoon. Trust us, it’s worth splurging for, it may just save your friendship/marriage/familial relationships some undue stress.

If you’re like us, the only shoes you bring when you travel to hot climates is a pair of flip flops. If someone tells you to wear “business casual”, you just laugh and walk away. We have three dress styles now: casual, swim suit, and gym clothes. We are simple people.

So when we started looking for rooftop bars in Bangkok, we were sad to see most places require “smart casual” (whatever that means, is the opposite stupid casual?). Luckily, there’s a rooftop bar called Cloud47 in the Silom neighborhood that caters to the flip-flop crowd and has no official dress code (though we can’t promise you that the hostess won’t look at you with a hefty dose of judgement in her eyes…) 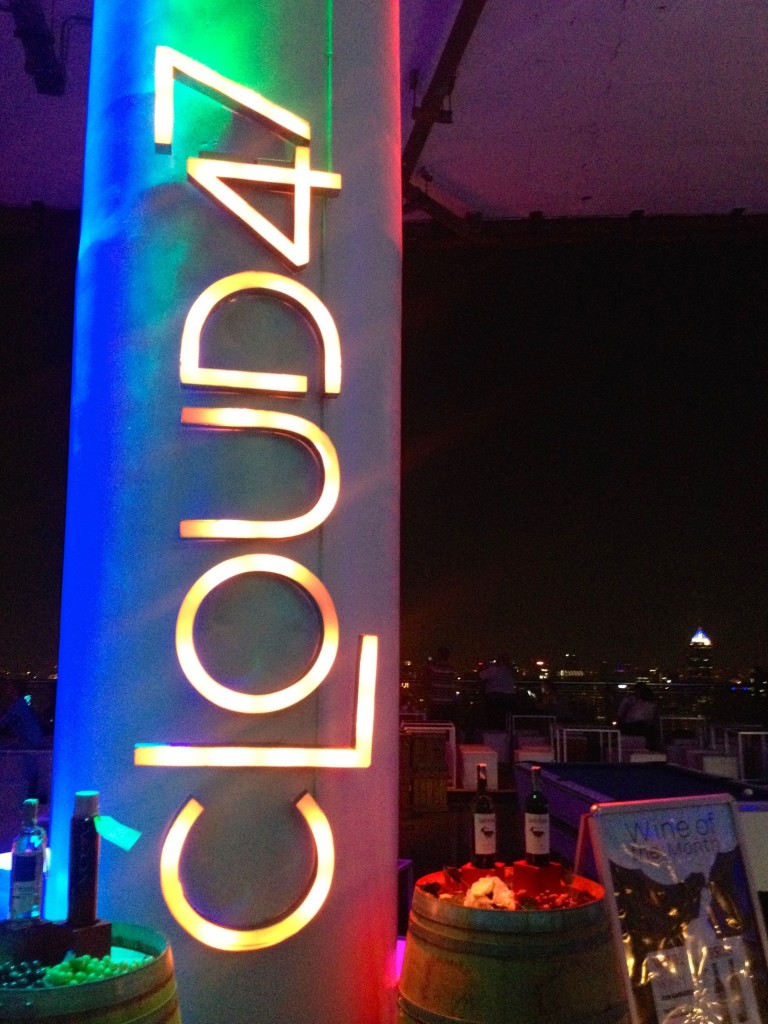 Cloud47: A Rooftop Bar Which Is a Modest Splurge. I’d Say it Falls Into the Upper Middle, or Maybe Even Lower Upper Price Range.

Cocktails start at just $10, which is far, far less than most other places. Beer is cheaper, but we were feeling fancy, in spite of our casual quick-dry clothing and flip flops. It’s worth a visit if you haven’t been to a rooftop bar before. Skip it if it’s raining or if you’re short on time in Bangkok.

Pro Tip: Cloud47 is nearly impossible to find. It’s at the top of the United Center office tower. Once you’re facing the United Center, walk down the alley on the left-hand side until you see a big glass-windowed lobby in the back on your right that looks like it is maybe the lobby of an apartment building. There may or may not be a cardboard cutout by the window that says Cloud47. Walk in, tell the person at the desk you’re looking for Cloud47, and they will help you the rest of the way. Helpful hint: walk through the same turnstile they take you through, or you’ll set off a series of aural alarms. I did this and it was embarrassing. Sigh.

It’s a good idea to call and make a reservation if you’re going after 9pm or on a weekend.

We stayed in the Silom neighborhood, which is the business district. We liked this area for two reasons:

Know How To Use the Taxis

Travels are always best shared with friends, especially when you spend 24 hours a day with your spouse, which means shiny new conversation topics are harder to come by. (Imagine a world where you always know the answer to “How was your day?” before asking. This is a constant problem and is a running joke in our house!) We planned our trip to Bangkok to coincide with a trip our friends Paul and Amy from Seattle were making to Thailand. 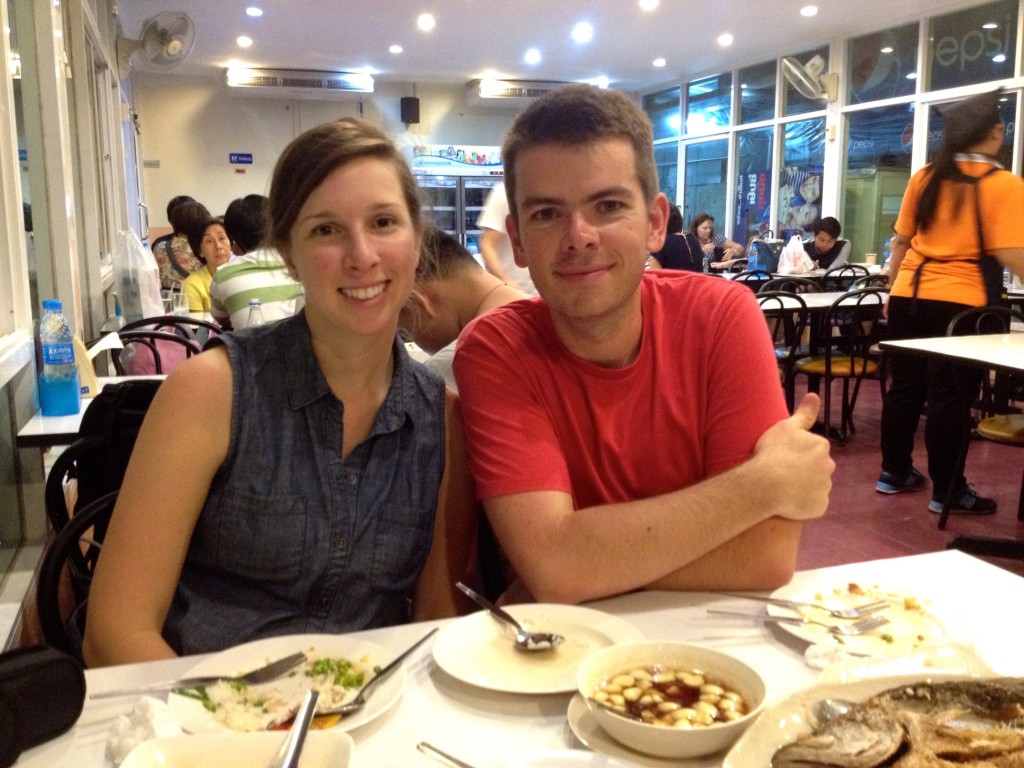 It was great to see friends, especially so close to Thanksgiving!

See, people DO visit us! And you should too. Check out our upcoming travel itinerary in the right hand sidebar (look for “View My Travel Itinerary”, which I always keep updated. If you’re going to be in our area, let us know! Happy Holidays, everyone!