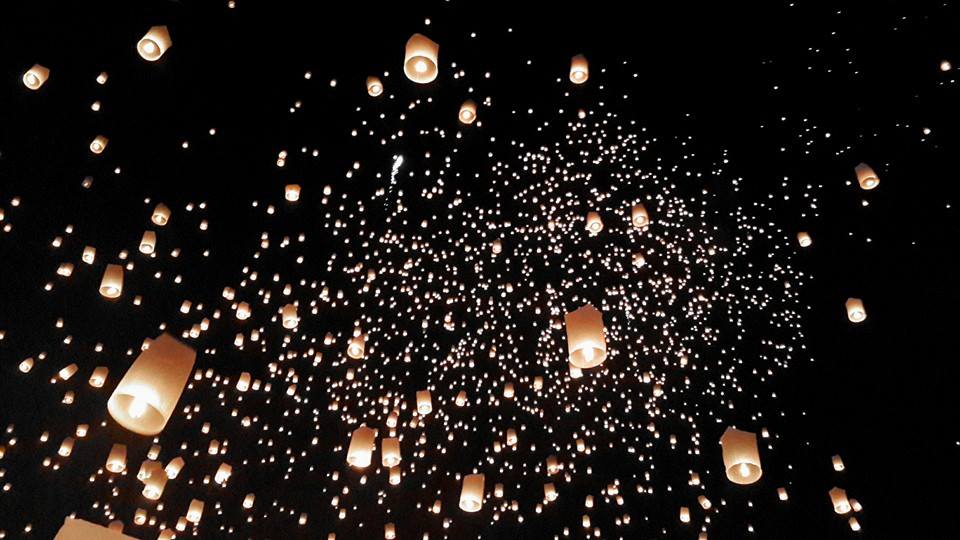 Chiang Mai’s annual lantern festival is a truly magical event. I figured it would be a pretty “neat” experience based on photos and videos I had seen online, but “neat” definitely didn’t do it justice. Attending Yi Peng changes you in some imperceptible way, sort of like seeing the ocean for the first time. It marks you somehow emotionally, or in my case, it left a small mark on me physically (see my note about safety below). We were fortunate enough to be in Chiang Mai for this year’s Yi Peng Lantern Festival, and managed to make our way up to Mae Jo to experience the magic.

What is Yi Peng?

Yi Peng (or Yee Peng) is a Lanna (Northern Thai) Festival of Lights that is usually held each year in November. Yi Peng literally translates to 2nd Month, and is always held on or near the full moon of the 2nd month of the Lanna Calendar. During Yi Peng, Sky Lanterns called Khom Loi are released to pay respect to Buddha. Launching one of these lanterns is believed to send a person’s bad luck and misfortunes away into the air, especially if it disappears from your view before the fire goes out. 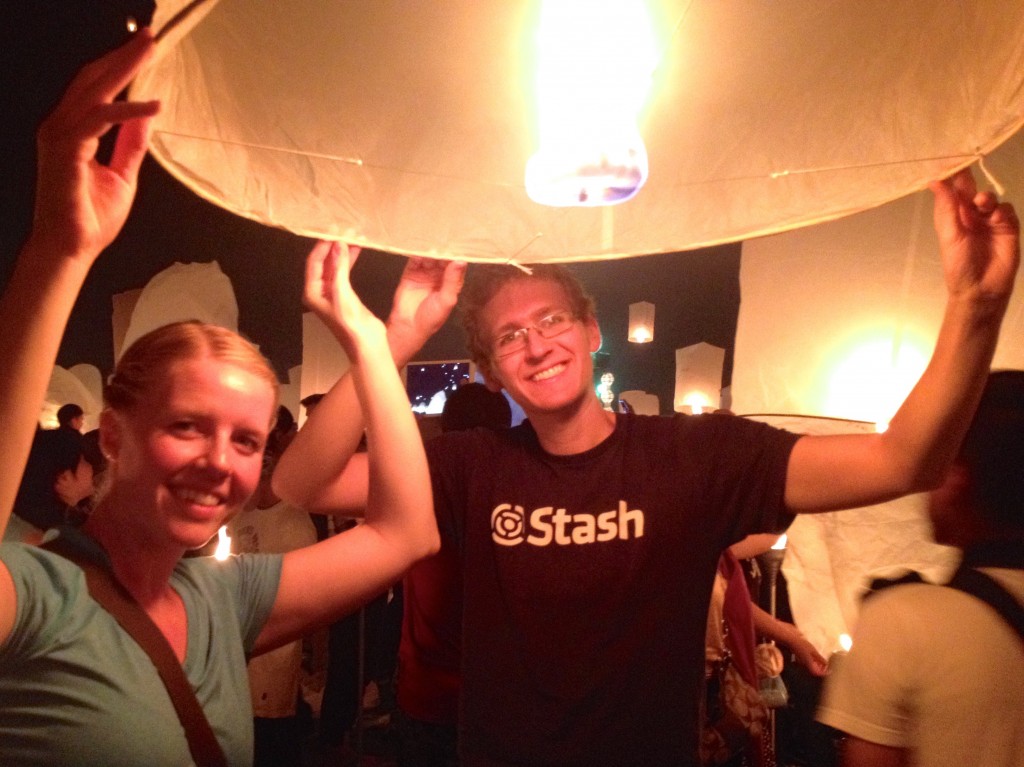 The Yi Peng festival is held each year on the grounds of the Lanna Dhutanka Temple behind Mae Jo University. Usually, it’s about a 25-minute drive North of Chiang Mai, but the drive can take nearly three times as long before and after the festivities. People start to crowd into the grounds as early as 2pm to snag a primo spot, but the ceremony preceding the lantern release actually doesn’t begin until 6:30pm. Lantern release starts at about 8pm, and is followed by fireworks! 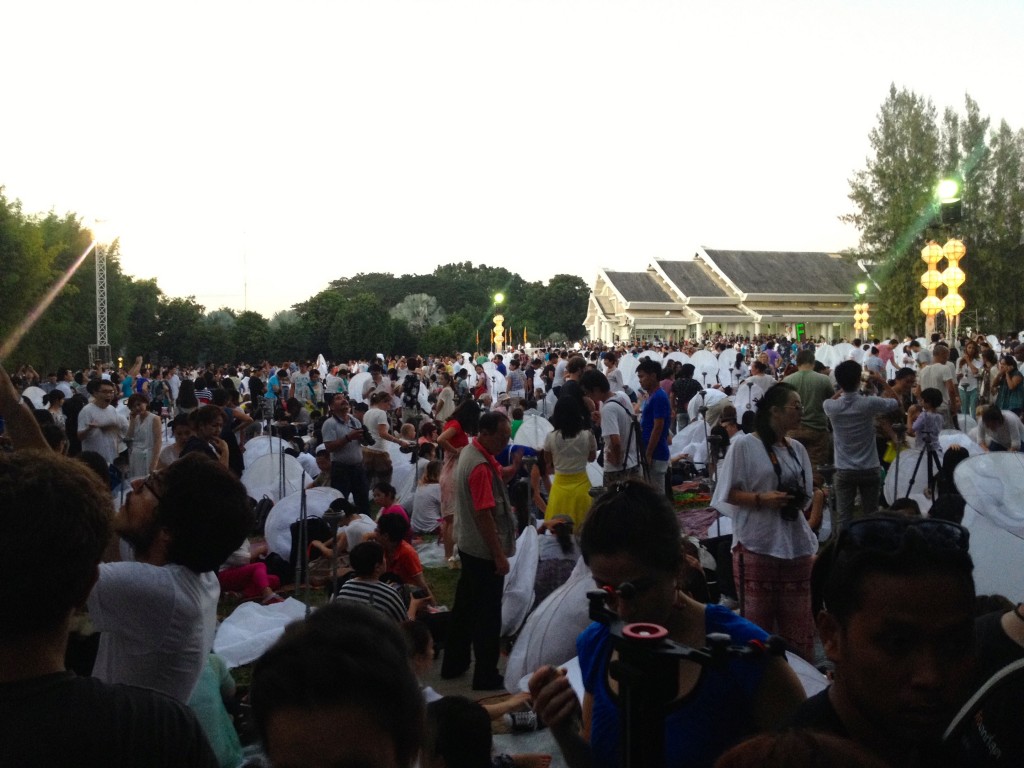 Check out these crowds!

It’s a good idea to arrive early (by 3 or 4pm) to stake out a spot, because it gets ridiculously crowded.

When is Yi Peng?

Two separate Yi Peng lantern release events are held each year. The first event has no admission charge, and is primarily attended by local Thai people, expats, and tourists-in-the-know. Because it’s free, this first event is typically VERY crowded. A second event is held a week or two later specifically for tourists, and a limited number of tickets are sold for about $100 each to keep crowding down. The ticket price includes transportation to and from Mae Jo, dinner, a lantern, and even a seating mat and scarf. Plus you won’t have to contort yourself into strange positions in order to fit into the small space you staked out on the temple grounds. 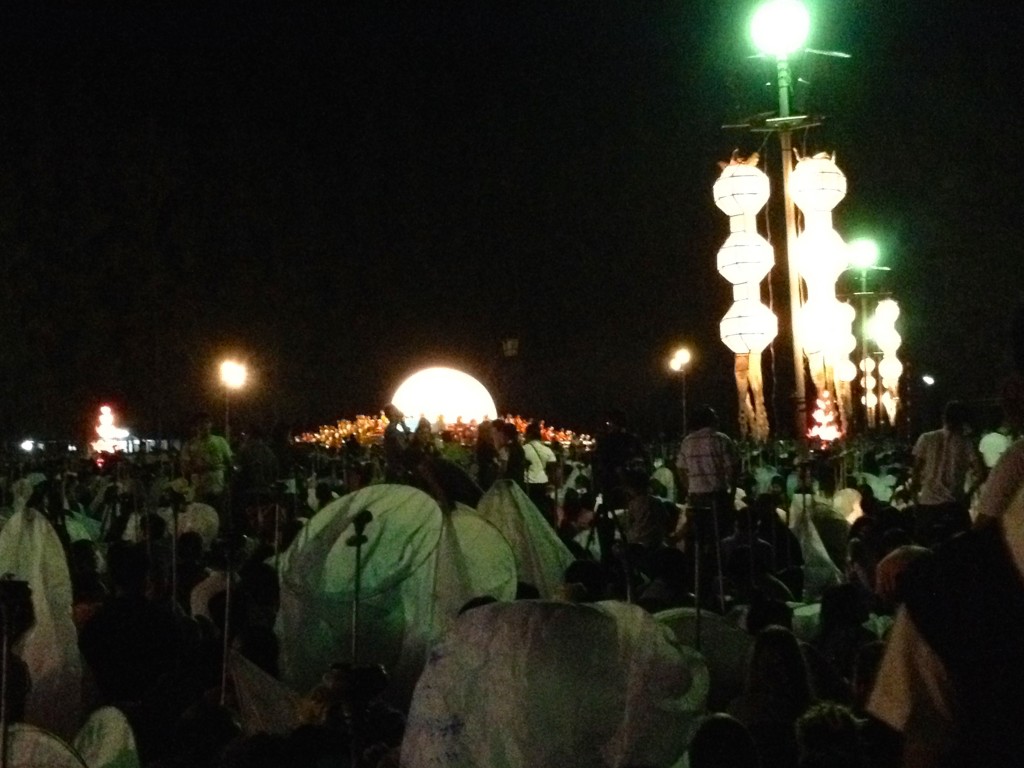 There is a Ceremony happening up there somewhere!

The date of the free lantern release is typically kept under wraps until last minute in an attempt to limit the number of tourists who flock to Chiang Mai to attend. I can understand why they want to limit the number of tourists at the event, because I saw some people being pretty darn disrespectful while we were there (see my note about respect below).

For 2014, the free event was held on Saturday, October 24. The paid event is scheduled for Saturday, November 8 (get tickets here). 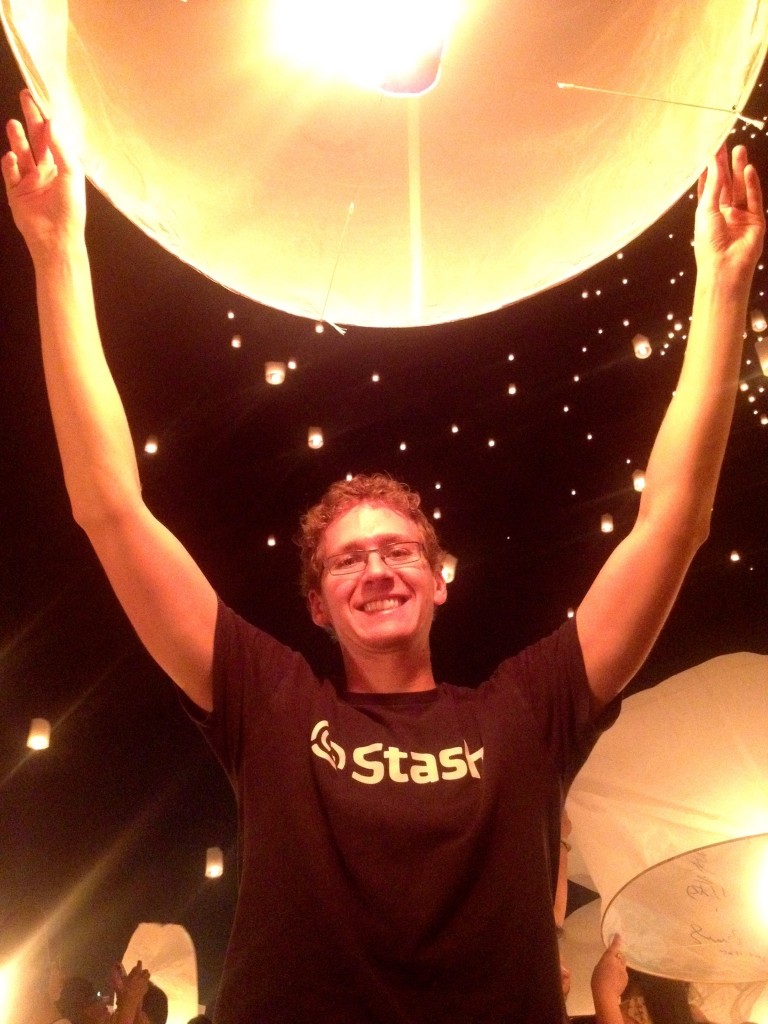 We opted to attend the free event because it’s so darn hard for us to stomach paying $100/ticket. That’s like 100 dinners for us here. CAN. NOT. HANDLE. Plus, I like to experience local traditions with the locals. I think it just means more to experience this Buddhist festival with people who actually know about the religious customs and traditions. 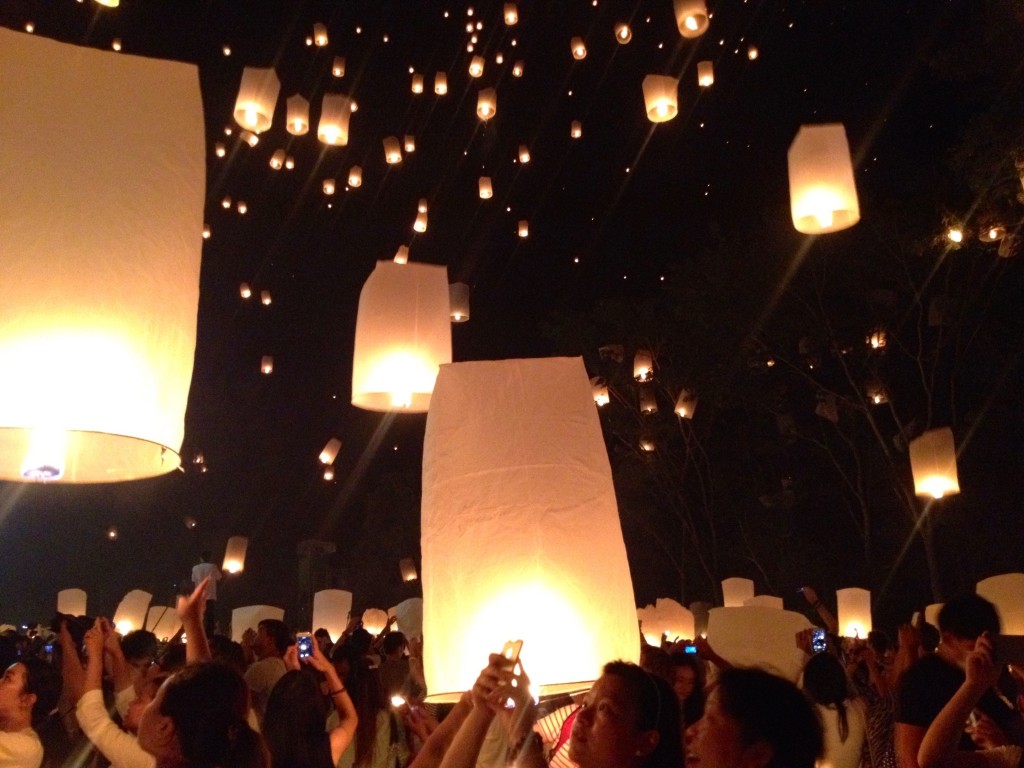 We’ve learned an important lesson here in Thailand, based loosely on the 80/20 Pareto Principle. In Thailand, you can usually spend just an extra 20% and increase your comfort level by 80%. We decided to splurge on a 500 Baht/person (about $15) round-trip air conditioned van ride to Mae Jo. And let me tell you, it was a HOT day, there was a TON of traffic, and we were thrilled to have aircon. We could have saved $3 each by booking round-trip in a Songathew. (A Songathew is a pickup truck taxi with bench seating in the covered truck bed.  Definitely no aircon, but plenty of dust and exhaust.) We could have saved $10 each by just flagging down a Songathew and haggling over price, but that would involve walking a few miles in the heat and haggling, two things guaranteed to turn me into a monster. We could have saved even more money by borrowing our landlord’s scooter, but I’m fairly certain I’d be making this post from a hospital bed right now if we had done that! Do yourself a favor, just pay up front for the round trip air-conditioned transport. You can thank me later. 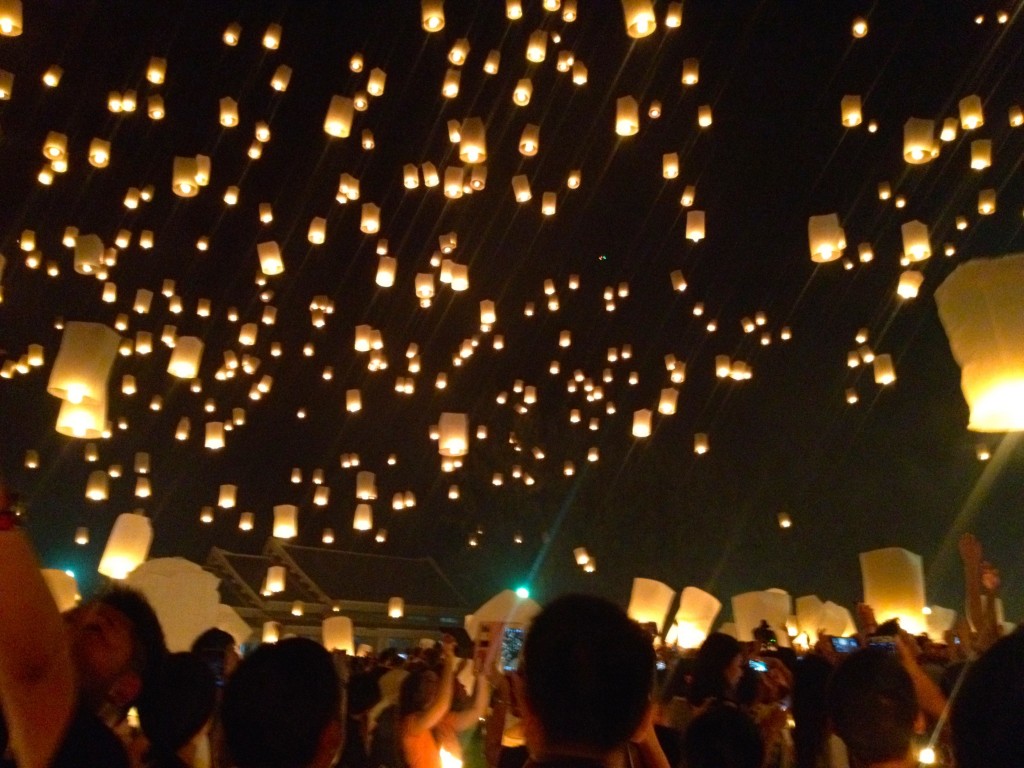 Booking round-trip transport for Yi Peng is easy – any hotel reception desk or tour company can do it for you. We walked into a hotel near our condo the day before the festival and asked them to book it for us. The real trick is finding out the date – we would’ve missed it were it not for the ridiculous number of Chiang Mai Facebook groups I’ve joined.

A Note about Safety 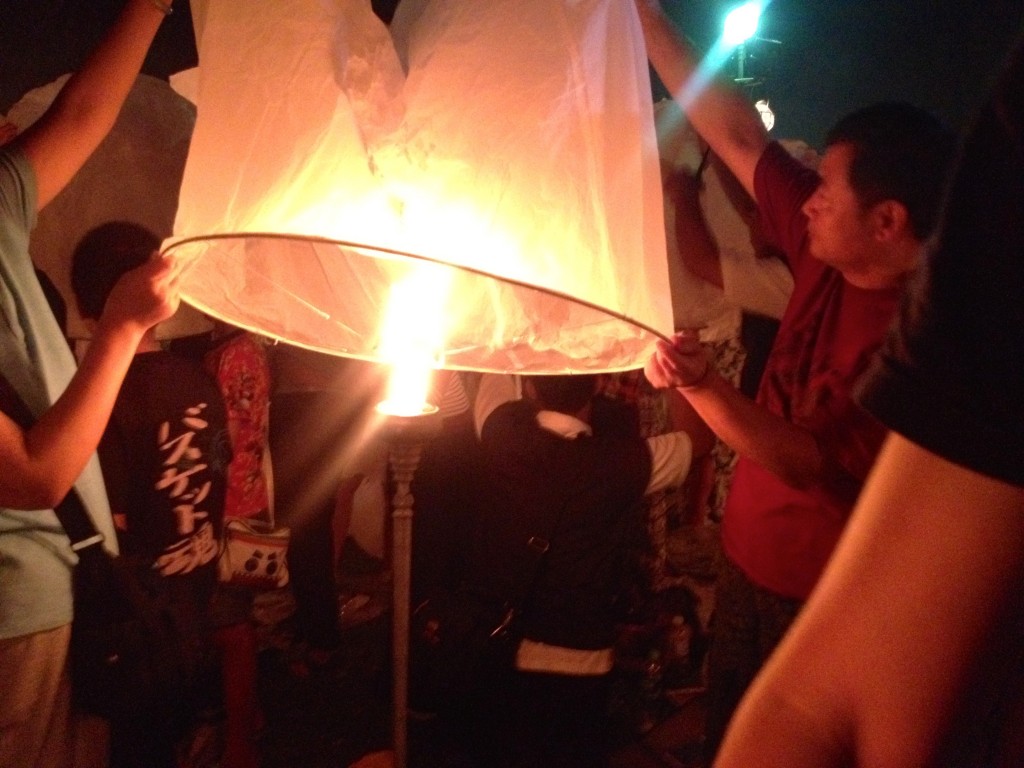 If you’re skiddish about being in huge crowds, this event is not for you. If you’re afraid of fire, this event is definitely not for you. Each year for Yi Peng, people pack into the temple grounds nearly shoulder to shoulder. At some point after everyone crams in, hundreds of torches all throughout the crowd are set on fire, and people start to light their lanterns on these torches and send them floating, on fire, into the air. Some lanterns catch on fire, like the one in this video, which landed right next to us:

There are a very limited number of small exit points, and no one announces an emergency evacuation plan. In fact, the exits are so insufficiently sized that it took us about an hour just to get out of the temple grounds after the ceremony ended. To top things off, I even got burned at Yi Peng this year! Some people get torch wax on their lanterns before releasing them, so hot fiery flaming wax rains down as the lantern floats off into the air. I’m sporting a nice red burn on my arm this week, so that’s fun. At least I was consoled by fireworks:

So let’s recap: huge crowds + open flames everywhere + floating fiery lanterns + hot flaming wax raining down from the sky = SIGN ME UP, AMIRITE?! Crowd control and liability are treated a bit more loosely here. It’s good and bad; you just have to be sure you’re watching out for yourself. In spite of the crowds and the fiery wax falling from the sky, Yi Peng is still definitely worth attending. It’s truly magical – I just might recommend wearing a hat and long sleeves, or bringing a small fire extinguisher.

A Note about Respect 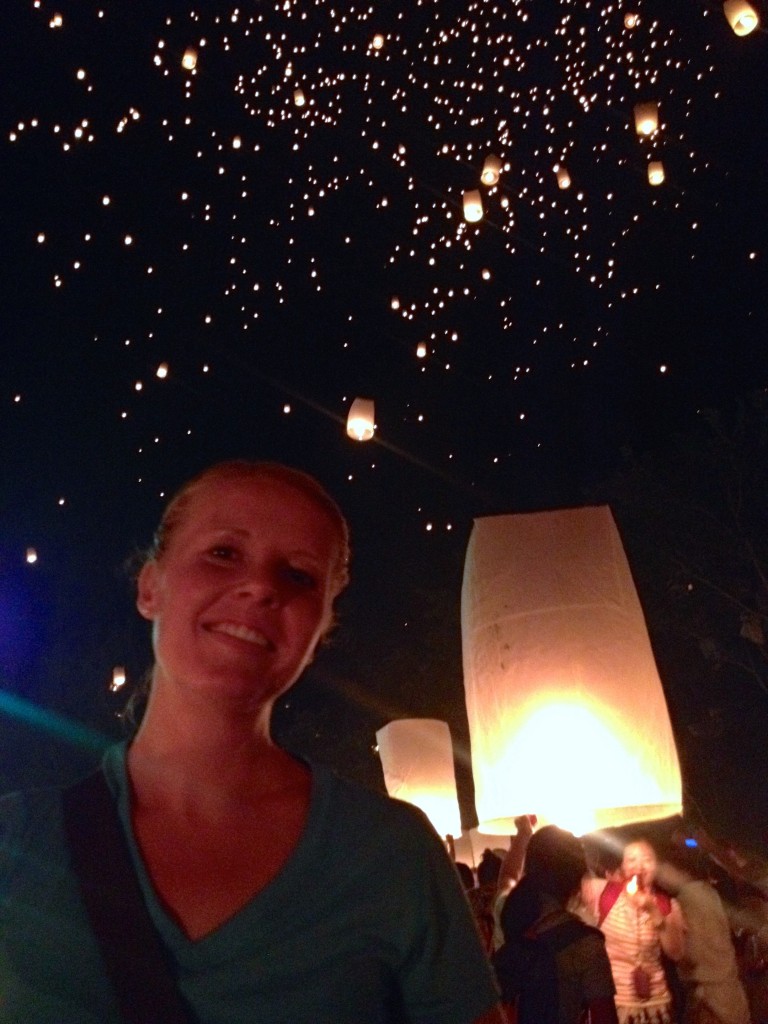 Yi Peng is a wonderful, spectacular experience, one I’ll never forget. Unfortunately, a lot of the tourists who attend either don’t know or don’t care that it’s a religious ceremony. It’s hard to enjoy the experience when the guy next to you is playing games on his iPad during the ceremony, with the sound on. It’s pretty annoying when everyone is standing up to take photos in spite of the announcer’s repeated attempts to get people to sit down. 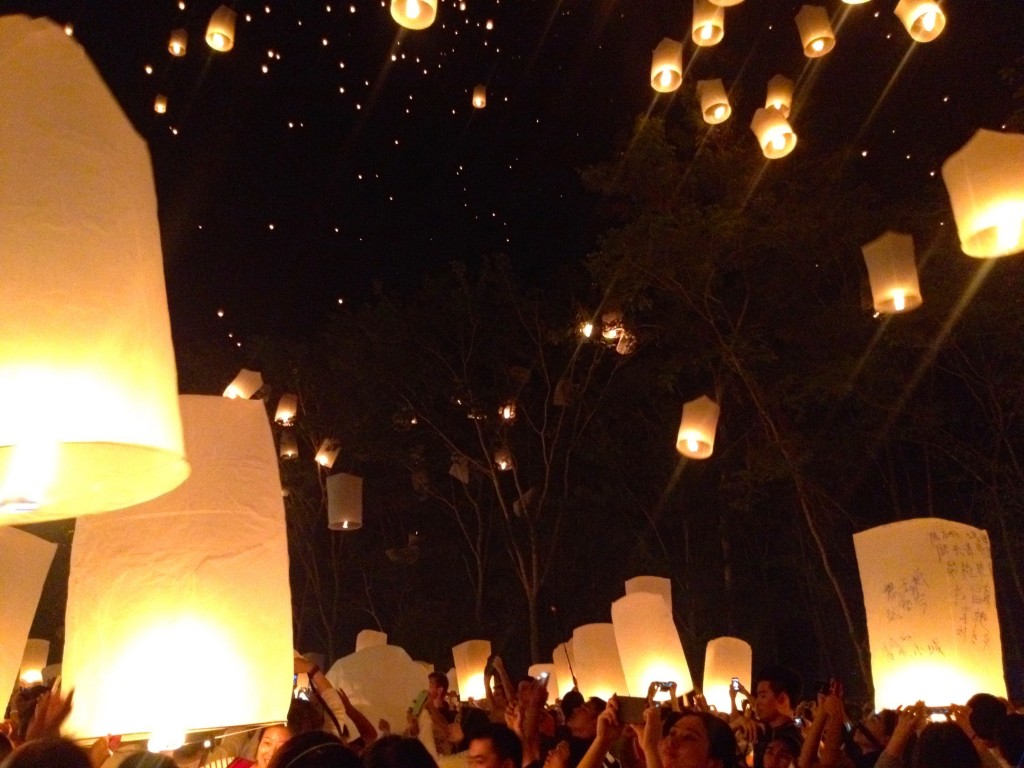 We even saw a couple girls whose clothes were so skimpy that I was afraid I would see some boobs if they so much as sneezed or coughed. I can’t wait for the day when I’m an old, spunky grandma that can walk up to girls wearing shorty shorts and say, “You know I can see your ass cheeks, right?” Luckily, there are students stationed at the entrances who will turn you away if you’re not dressed appropriately. Shoulders and knees should be covered, but you get bonus points if you go traditional Lanna style and wear all white.

Have you had any experiences on your travels that are must-dos? Leave us a comment and let us know!