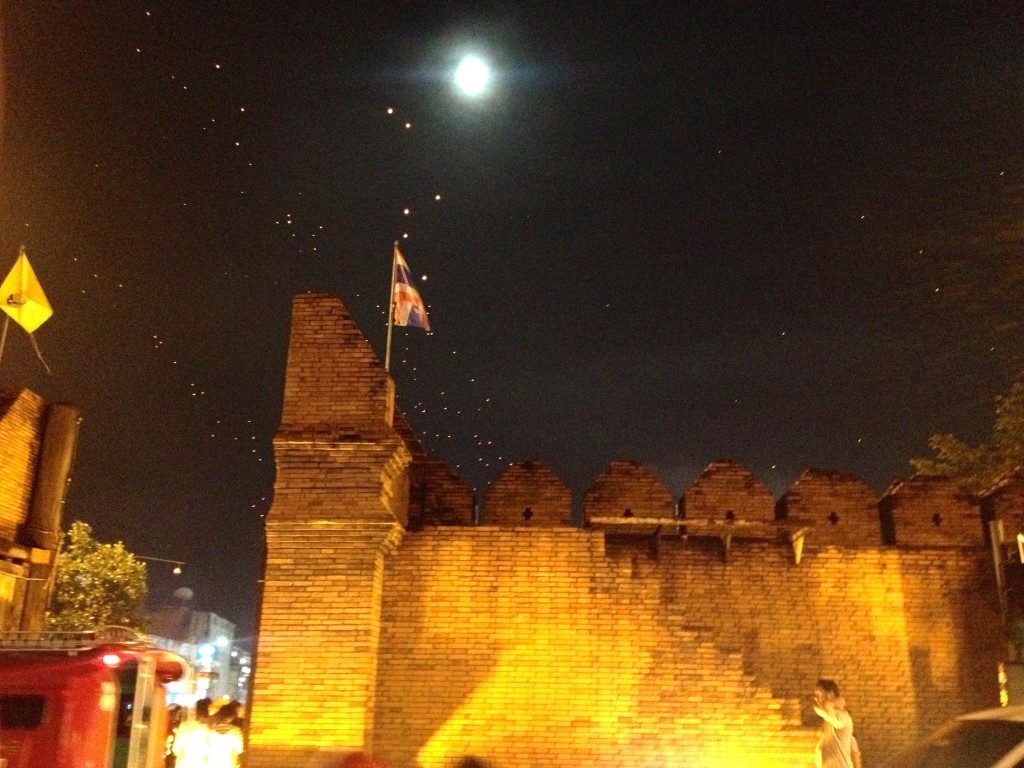 Everyone knows Kevin and I love celebrating the Fourth of July in Seattle. I love a good excuse to use my red, white and blue food coloring on festive goodies like popcorn or elaborately frosted sugar cookies. I also never pass up an opportunity to carve a boat out of a watermelon. I did grow up in Kansas, after all – watermelon boats are a food staple there. Just ask my mom, the best watermelon carver I know. 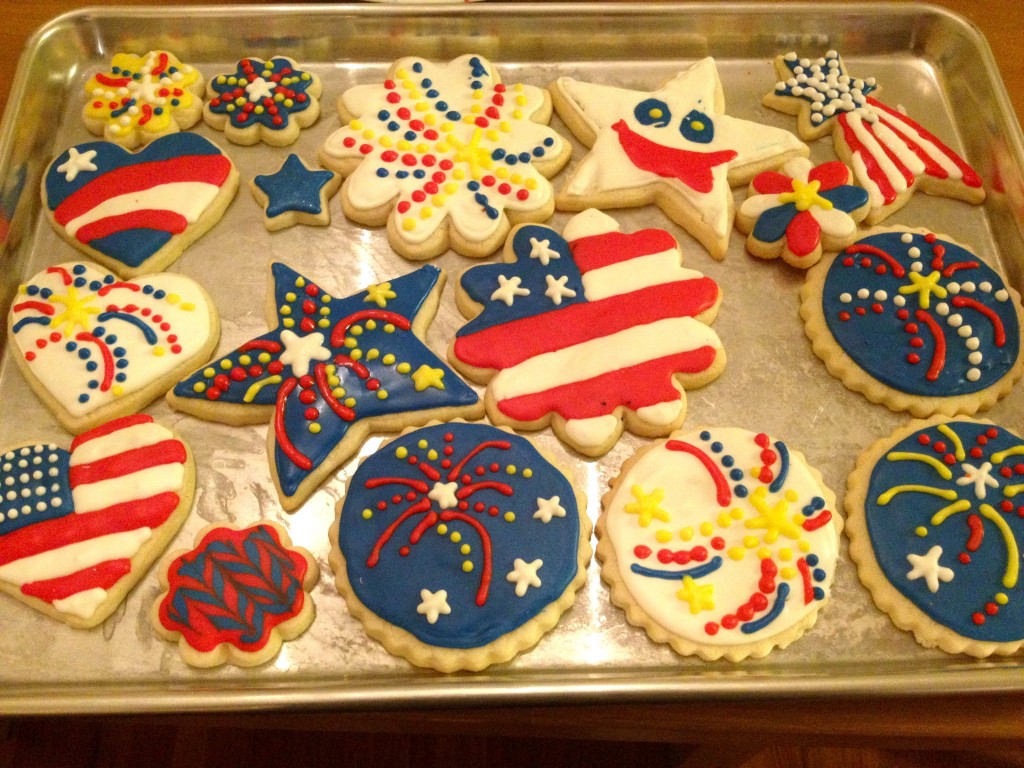 Proof of my over-festive tendencies on 4th of July.

But our favorite thing about the Fourth of July is probably just the general excitement everyone has about blowing shit up. (Be honest, you know that’s your favorite part of the Fourth of July, too. I’m talking to you, DAD.) So we were understandably delighted to learn that there is an annual festival here in Thailand where people set off fireworks for DAYS.

I am both excited and terrified to report that there seem to be ZERO rules about setting off fireworks inside city limits, along with a complete disregard for personal safety. In my opinion, that is a winning combo. People set off bottle rockets at all hours. Kids are lighting firecrackers dangerously close to cars. Motorbikes are zooming through showers of sparks. We even saw a toddler who could barely walk throwing down Snap ‘n’ Pops. The whole city reeked of gunpowder. It was awesome.

What is Loy Krathong?

Contrary to what you might think at this point, Loy Krathong (sometimes spelled Loi Kratong) is about more than just setting off fireworks. For the last 150 years or so, Loy Krathong has been celebrated as a religious holiday to honor the Buddha. Before that, it is believed that Loy Krathong was a Brahmanic or Indic festival held to honor several different gods.

Loy Krathong is held each year on the full moon of the twelfth month of the Thai Lunar Calendar. This year, the full moon fell on Thursday, November 6th, but there were festive events being held every day for a full week! You can’t go wrong celebrating Loy Krathong in Chiang Mai because of all the fun events, and also due to the fact that Yi Peng is typically celebrated around the same time here as Loy Krathong.  (See my previous post about Yi Peng.) People come from all over Thailand, and from all over the World, to celebrate this colorful holiday in Chiang Mai!

Sending Away our Misfortunes during Loy Krathong

Unlike Yi Peng, which is mainly a Northern Thailand holiday, Loy Krathong is celebrated all over the country. Throughout the Loy Krathong festival, people say prayers and make wishes for better luck in the year to come. Many people release small “Krathongs” into rivers, lakes and ponds. Krathongs are small floating boats made of mostly biodegradable materials (they used to be made from styrofoam, yuck!) with incense and candles. Releasing these lighted boats into the river is meant to symbolize the release of bad luck and misfortune to float away from you and out of your life. 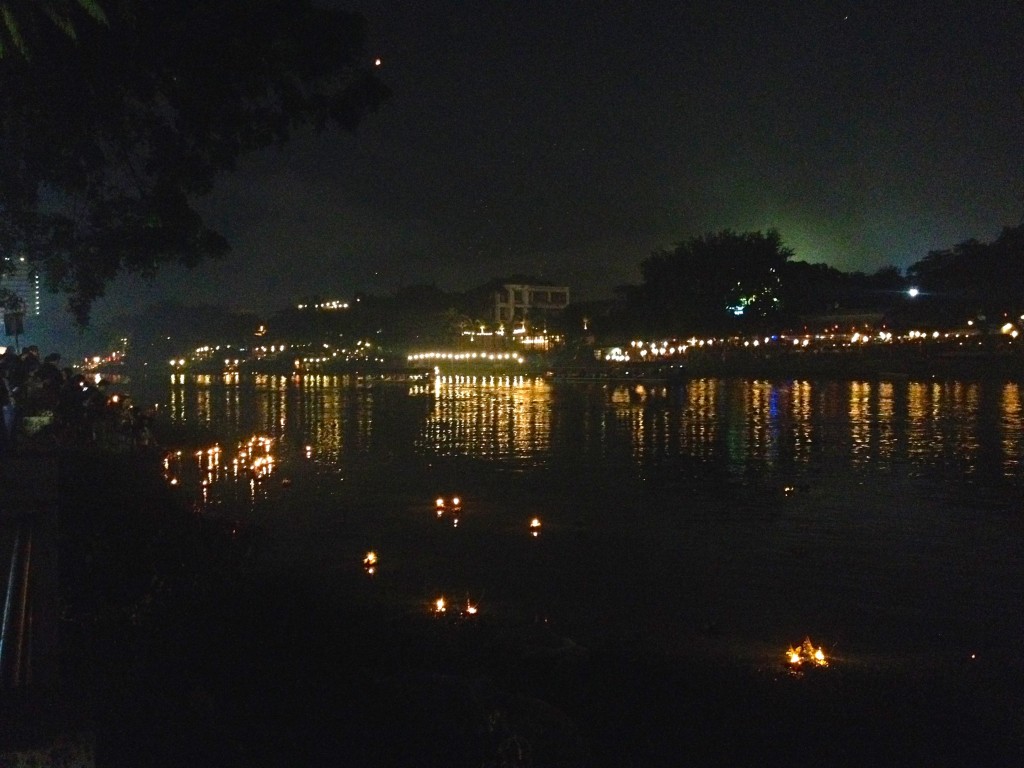 We released a floating Krathong of our own for good luck. It floated so far down the river that we couldn’t see it anymore – I think that’s a good sign! 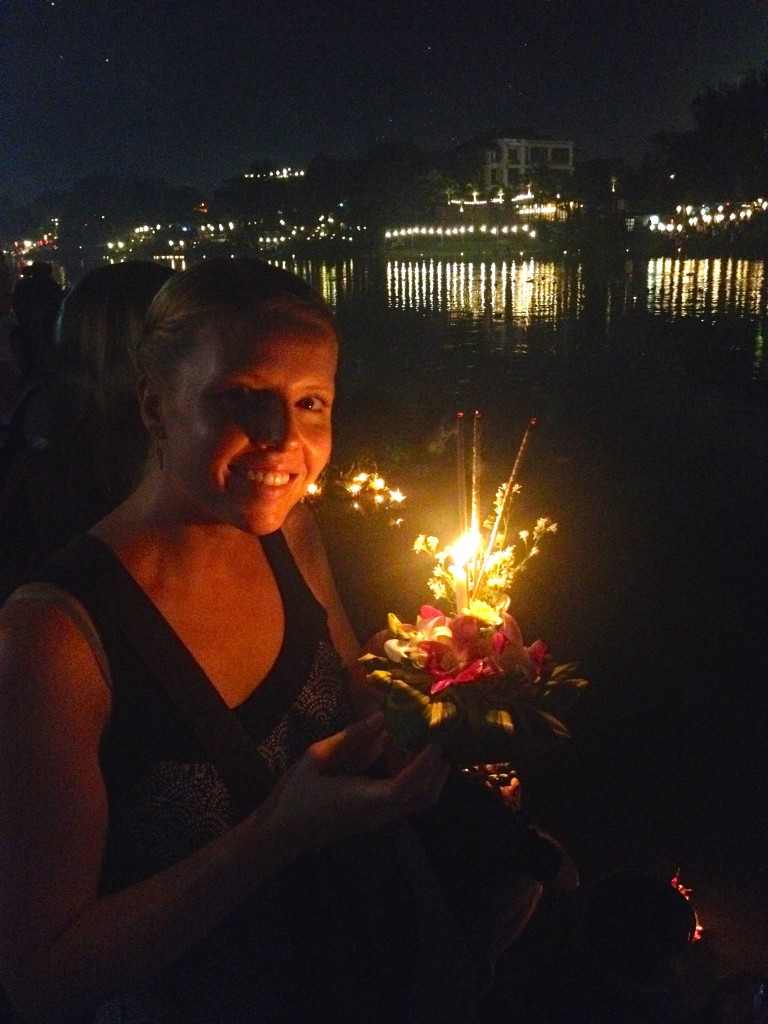 About to release our troubles and worries into the Ping River with our Krathong.

Throughout Loy Krathong week, people are also continuously releasing floating lanterns into the sky, another symbolic gesture to send away bad luck and misfortune. At night, the Chiang Mai skyline is just FULL of these lanterns. It’s beautiful! Tourists releasing a floating lantern by the Ping River. Some people attach fireworks to their lanterns, like the one in the sky in the background!

We’re lucky to have a top floor apartment with huge windows facing the city, so we just pulled our sofa up to the sliding door and watched the lanterns float by for a few hours. 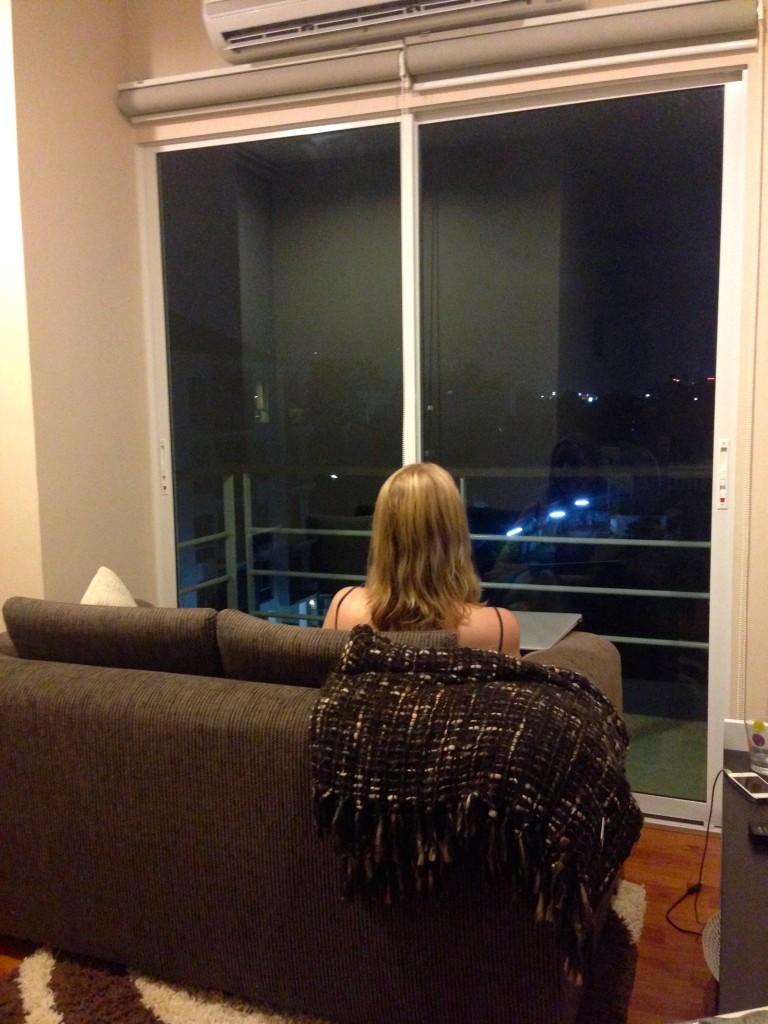 We sat and watched hundreds and hundreds of lanterns floating in the sky, and fireworks going off all over the city skyline!

Chiang Mai really dresses itself up for this colorful holiday. Lanterns are everywhere! 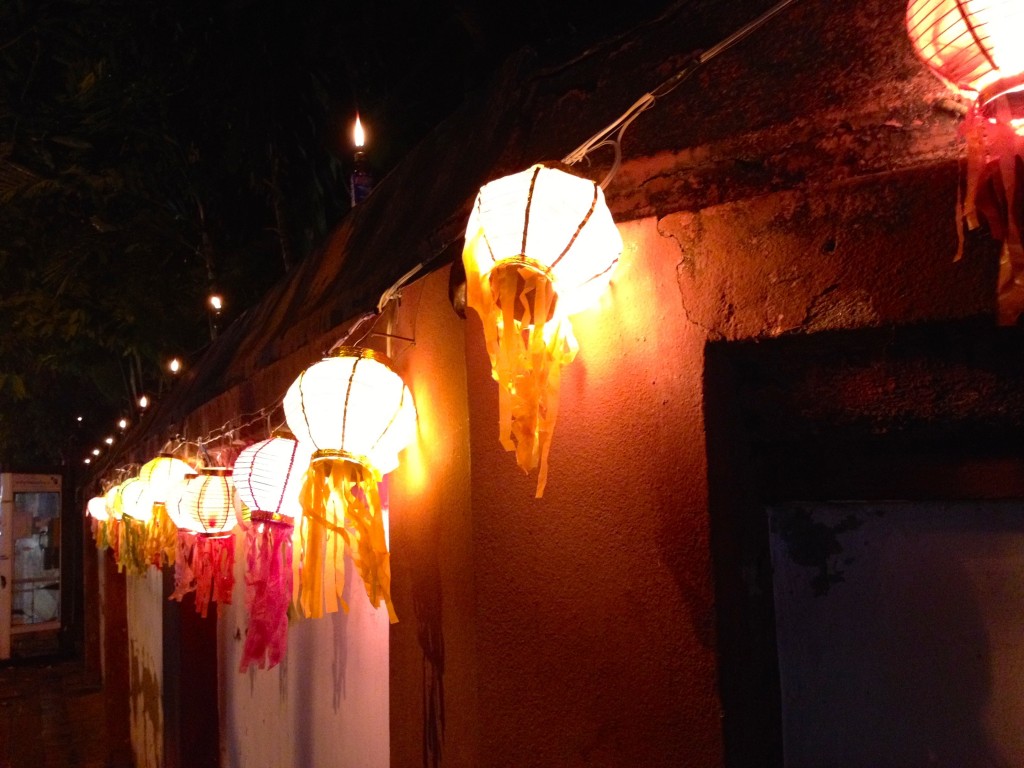 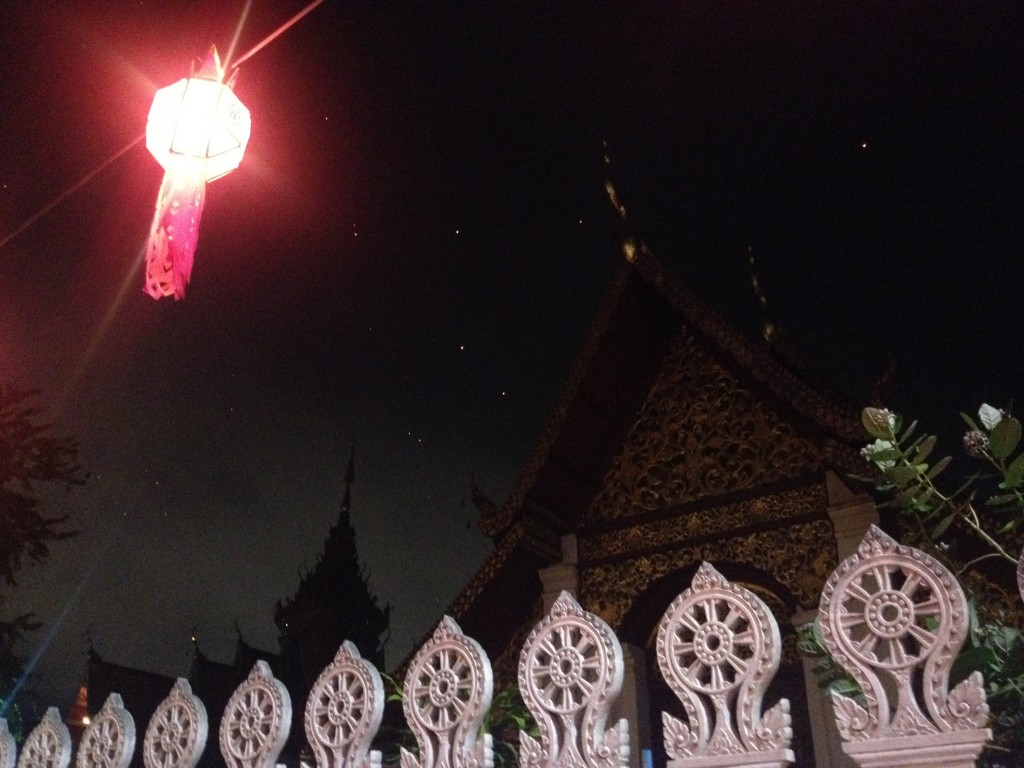 I’m so artsy. Here’s a photo of a lantern in front of a Wat (Buddhist Temple), with floating lanterns in the sky. 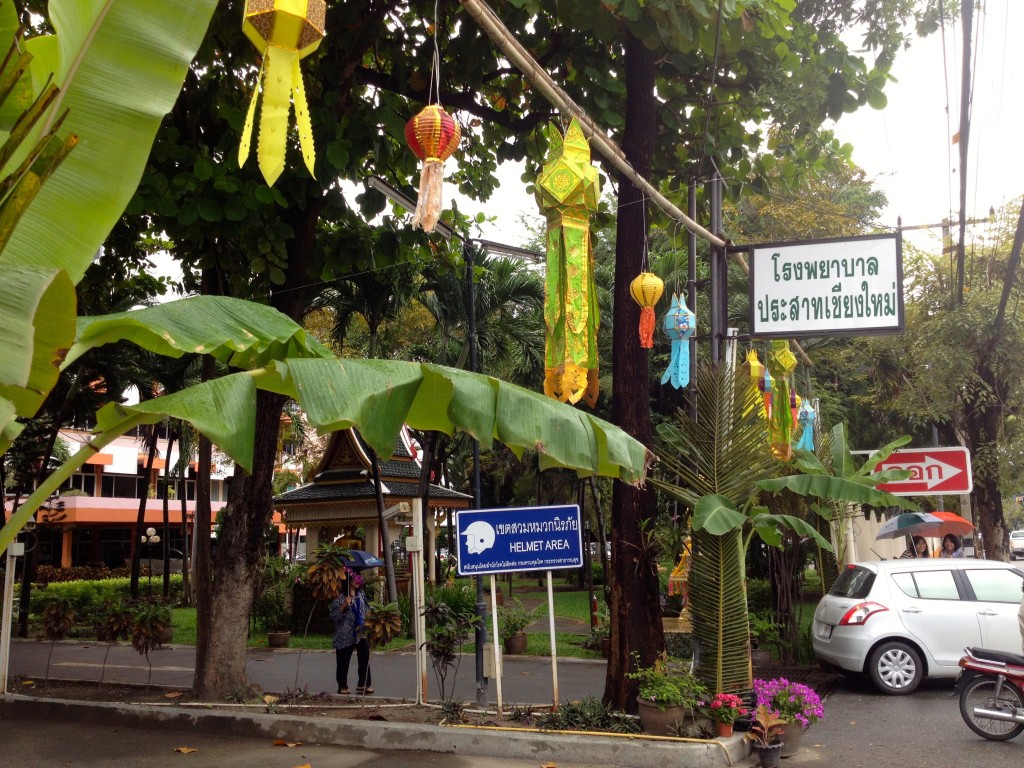 Lanterns in our neighborhood.

Giant Krathongs and inflatable dragons appear at each of the entrances to the Old City. 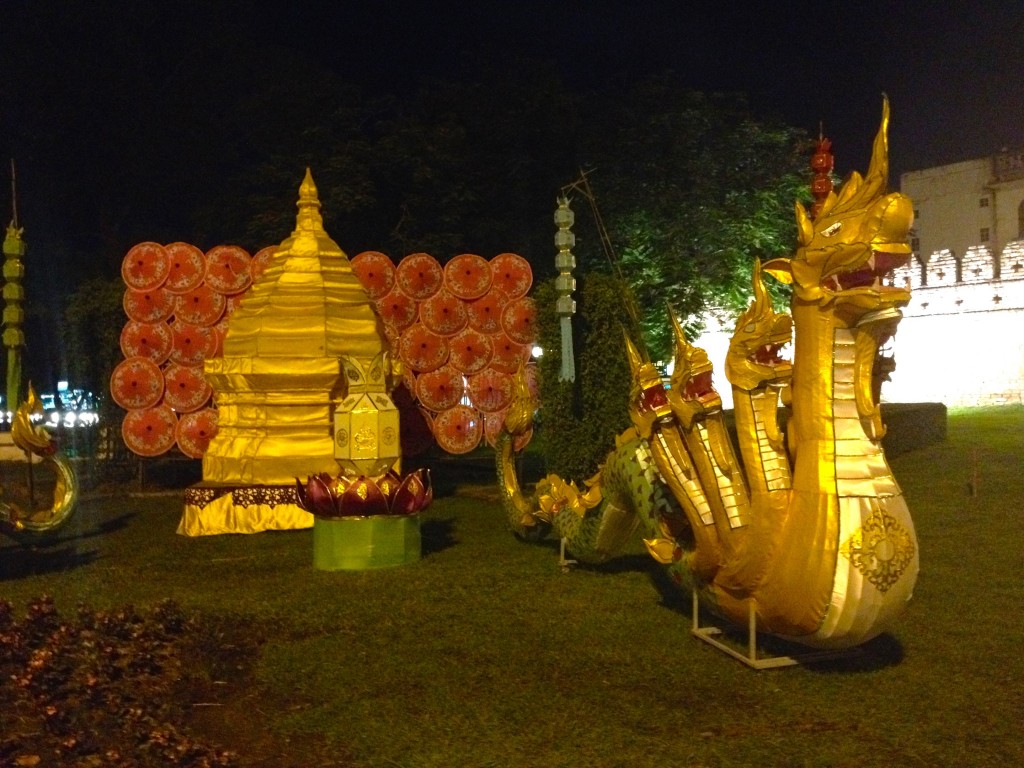 Dragons at Suan Dok Gate, the Western entrance to the Old City 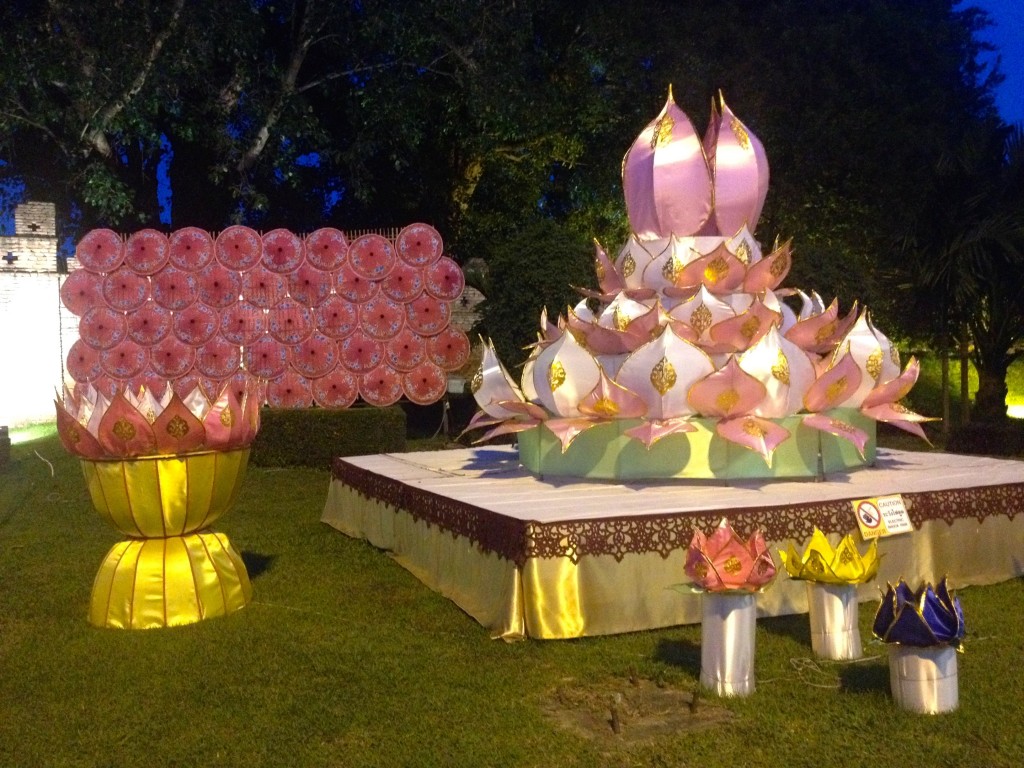 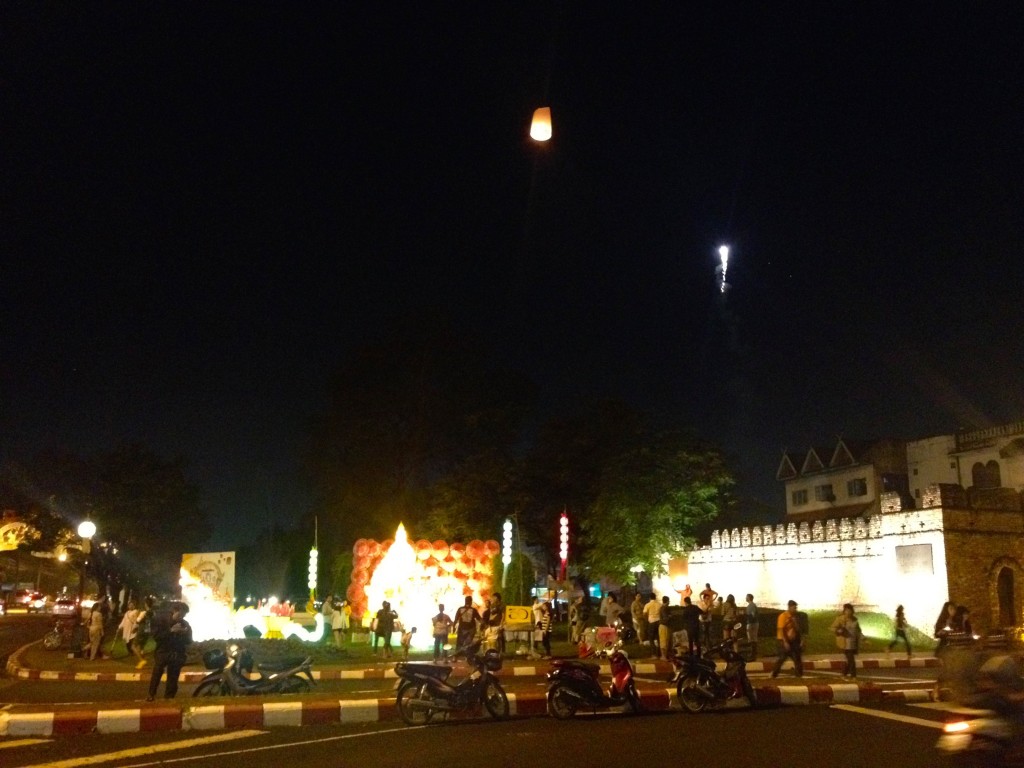 Suan Dok Gate is pretty festive during Loy Krathong. Here are some folks releasing floating lanterns into the sky.

On the night of the full moon, people put tons of candles outside their homes and businesses. 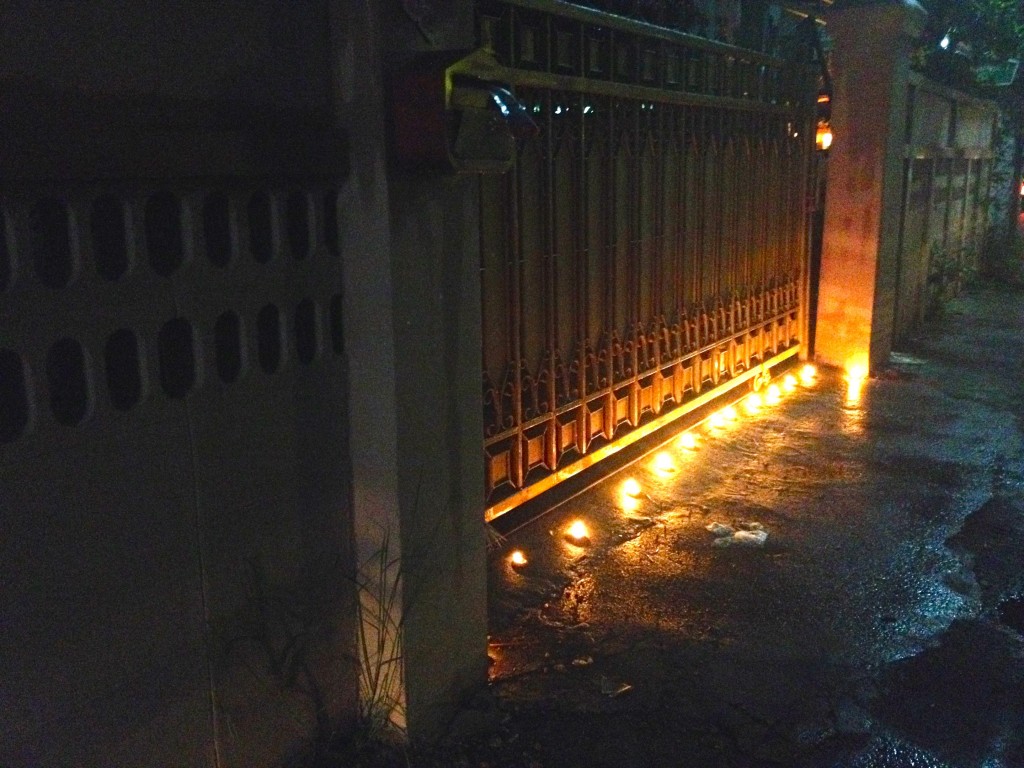 Beautiful candles in front of one of our neighbor’s homes on the night of the full moon.

The entire city has a warm glow, and lanterns are floating throughout the sky. It was so neat to be here to see it. 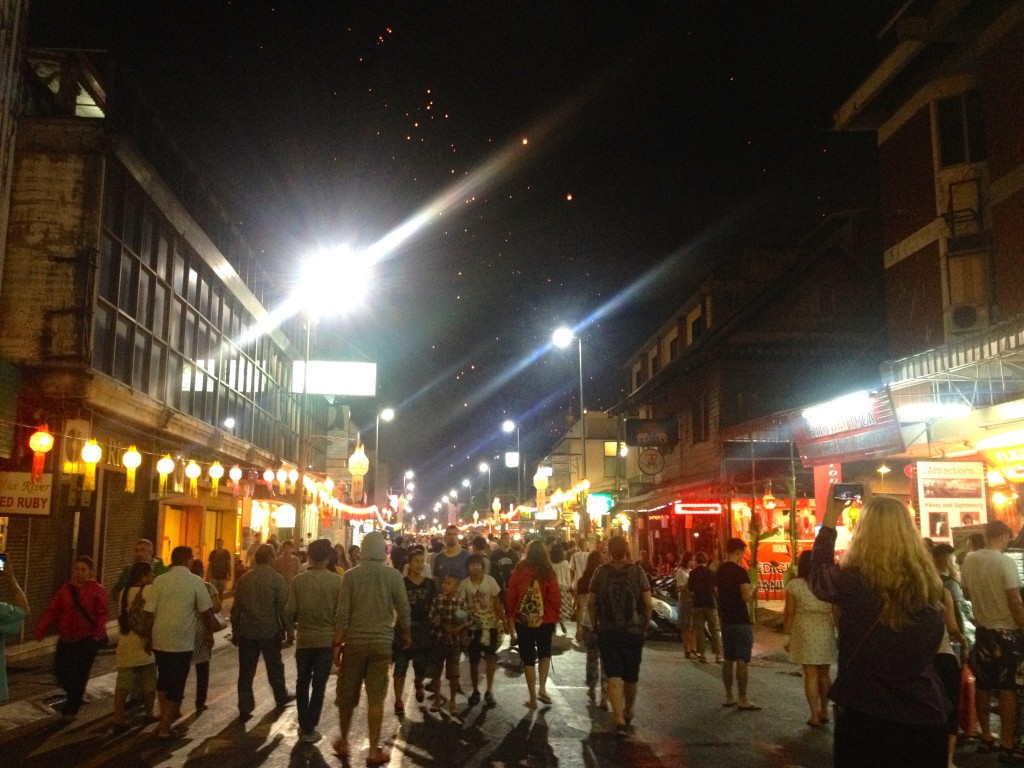 Check out this huge crowd after one of the parades!

There are TWO parades during the week, because one would clearly be insufficient. There are also two beauty pageants – one for women, and one for men. I’ve never seen a male beauty pageant before, but we lucked out and happened to pass by during what I can only assume was the swimsuit competition (see photo below). Score! Finally, the fireworks! I’m pretty sure everyone in Chiang Mai is a pyromaniac. We were walking down a PACKED street after a parade, and people had to scramble when one hooligan set off this spark shower! KIDS TODAY…

During Loy Krathong, it’s easier to locate and purchase bottled rockets than it is to buy beer. (Sidenote: did you know you can only buy beer in Thailand between 11am-2pm, and after 5pm?) In fact, it’s easier to find and purchase fireworks than LOTS of everyday things I used to buy in the States all the time: all purpose flour, baking soda, soft toilet paper, dark chocolate, good wine, decent quality closet hangers, unscented laundry detergent, tampons (overshare?), coffee beans, chocolate chips, canned pumpkin, reasonably priced sunblock, bagels, cheddar cheese, I could go on and on… Our neighbors set off their fair share of fireworks!

Since we live outside Chiang Mai’s tourist area, we got to see this holiday through the eyes of our Thai neighbors. We watched families setting off fireworks on the small street we walk down each day. We watched a toddler throwing snap ‘n’ pops everywhere. We even saw our fruit lady’s husband setting off bottled rockets. Many of our neighbors put out lanterns and flowers for Loy Krathong.

The entire city smelled like gunpowder, and a cloud of smoke settled down over everything, giving all of Chiang Mai an eerie glow. 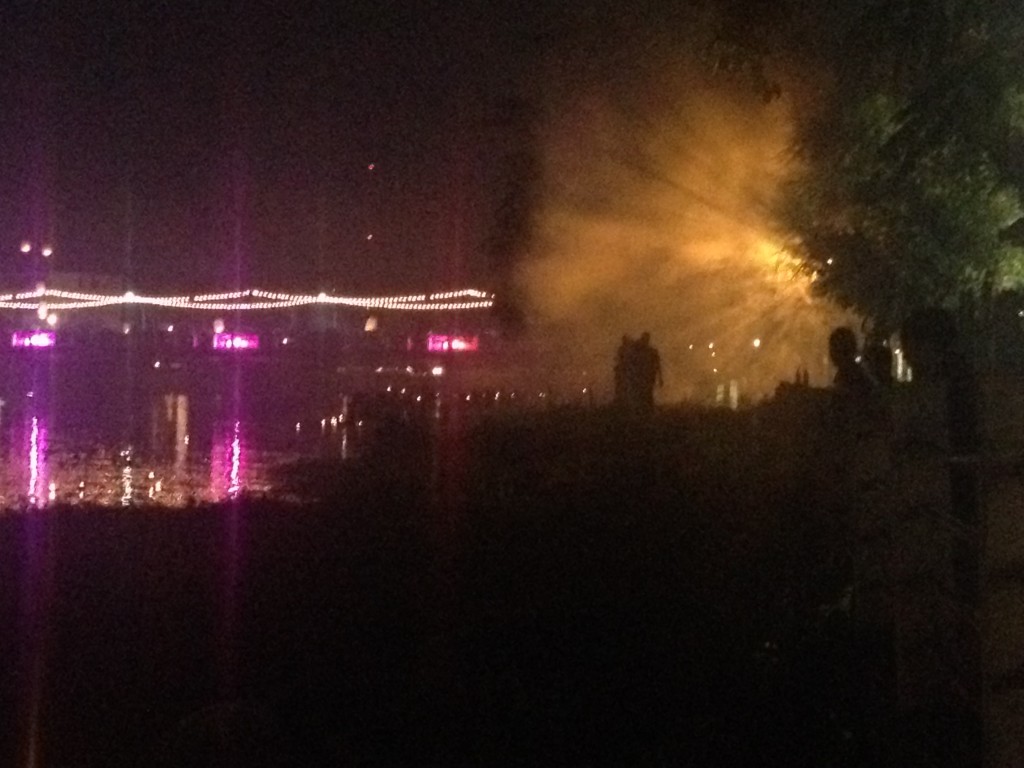 The smoke blanket that settled over Chiang Mai during Loy Krathong.

There’s a reason people travel from all over the world to be here for this holiday!

Have you been a part of any huge celebrations around the world? Carnival in Rio? Oktoberfest in Munich? New Years in Times Square? Burning Man in the Nevada desert? Leave us a note to let us know!