Quick note: this post is coming out of sequence. We left Sevilla almost 2 weeks ago, so I’m stepping up my posts to 2 per week until I get caught up. I’ll be posting on Tuesdays and Fridays for the next month or so.

Having grown up in the US, I’ve always had a negative attitude towards graffiti. In most US cities, graffiti is considered an eyesore and is unquestionably illegal and frowned upon. At best, a witty graffiti artist might give you a chuckle by tagging a building with a clever cartoon. At worst, it can be an indicator that you’re in a dangerous neighborhood. I was surprised at how different things are here in Spain – Graffiti in Sevilla is considered an art form!

We came to love the bike path along Sevilla’s beautiful Guadalquivir River, and grew especially fond of the graffiti that seems to cover every square inch of the walls that run along the path. From what I can find on the interwebs, graffiti is indeed illegal in Sevilla, but it seems that this particular law is generally ignored by the locals and unenforced by police. Whole families bring spray paint cans along with their picnics on Saturday afternoons so they can work on their latest graffiti projects.

I took my camera along with me one day when I went out for a run – here are a few of my favorite pieces of Graffiti in Sevilla. 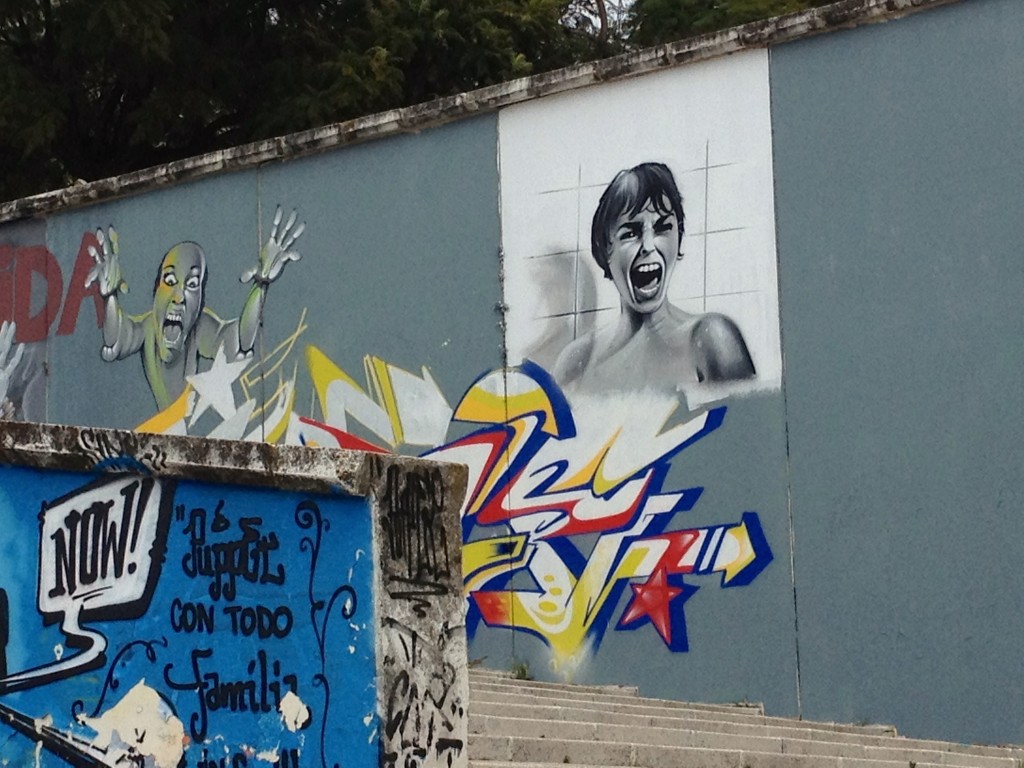 Does anyone remember what movie this one is from? 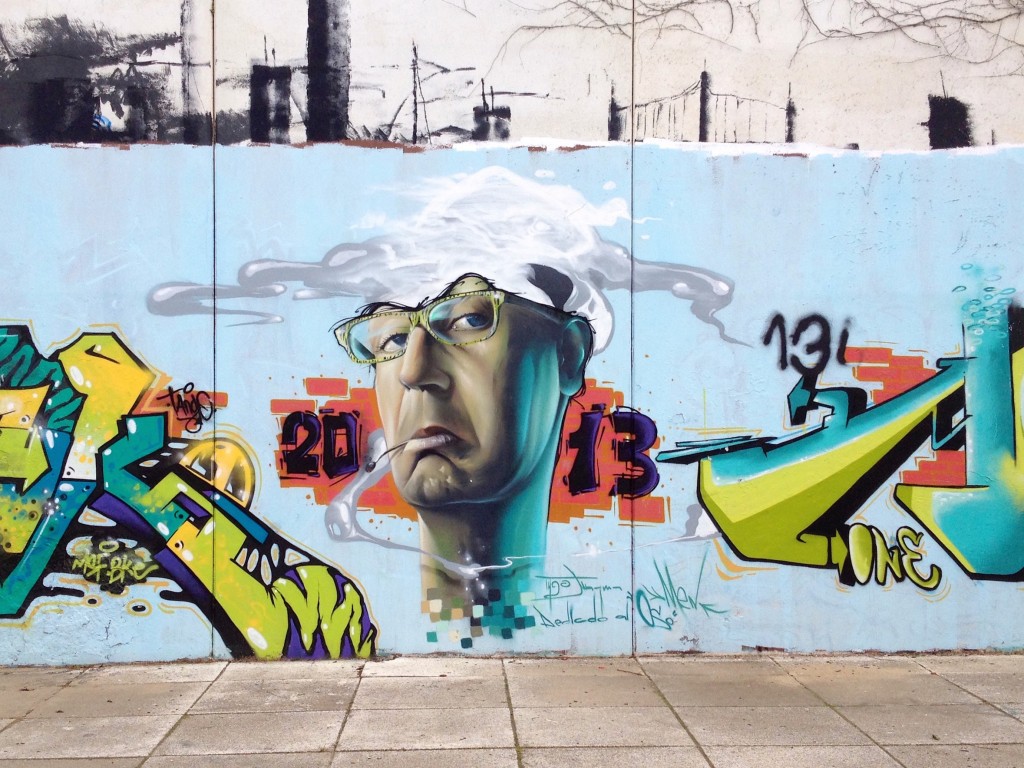 I love this one. I hereby call it “Brain Fart”. 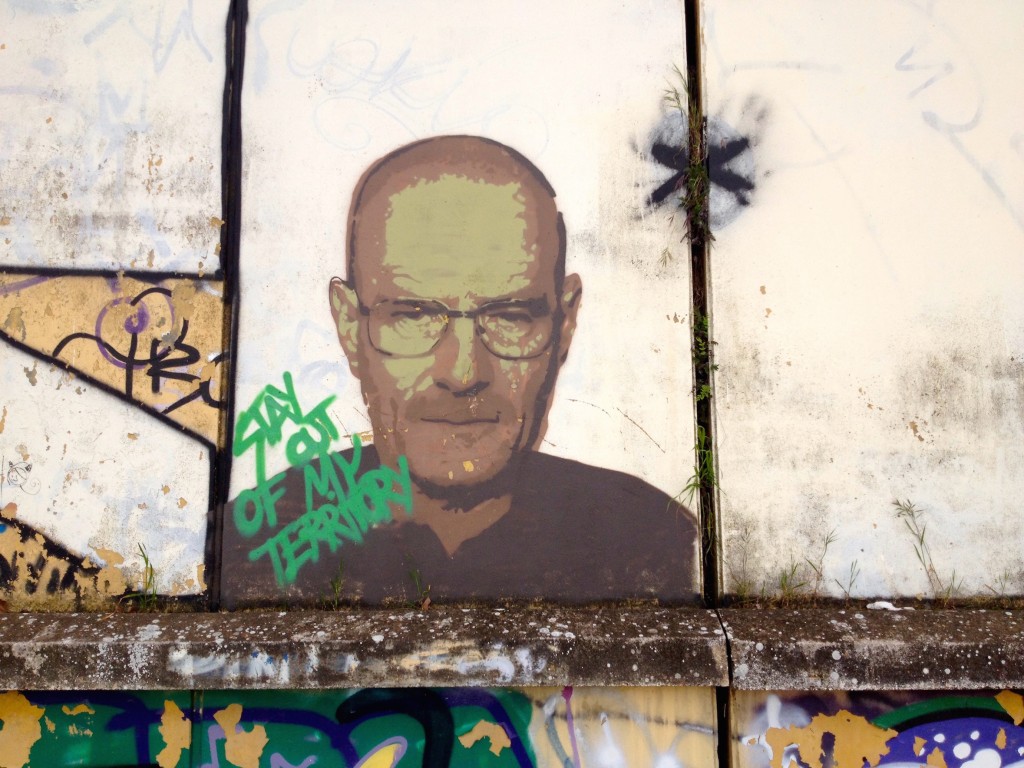 What would a post about graffiti be without Walter White from Breaking Bad? Clearly American pop culture is alive and well here in Spain. 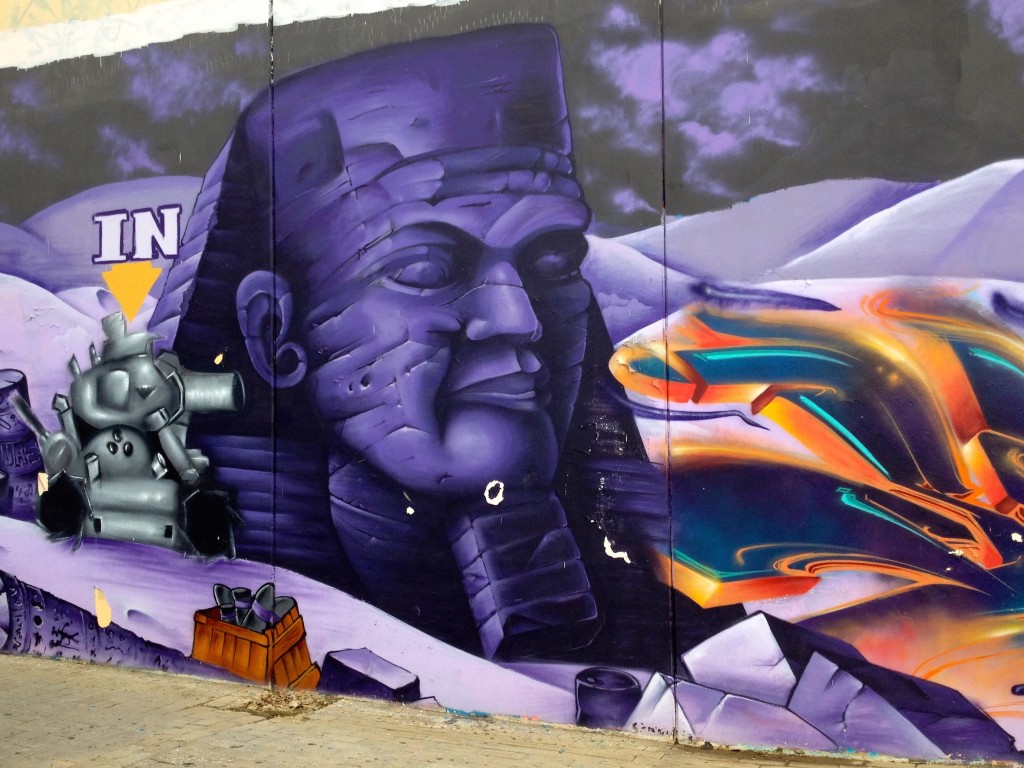 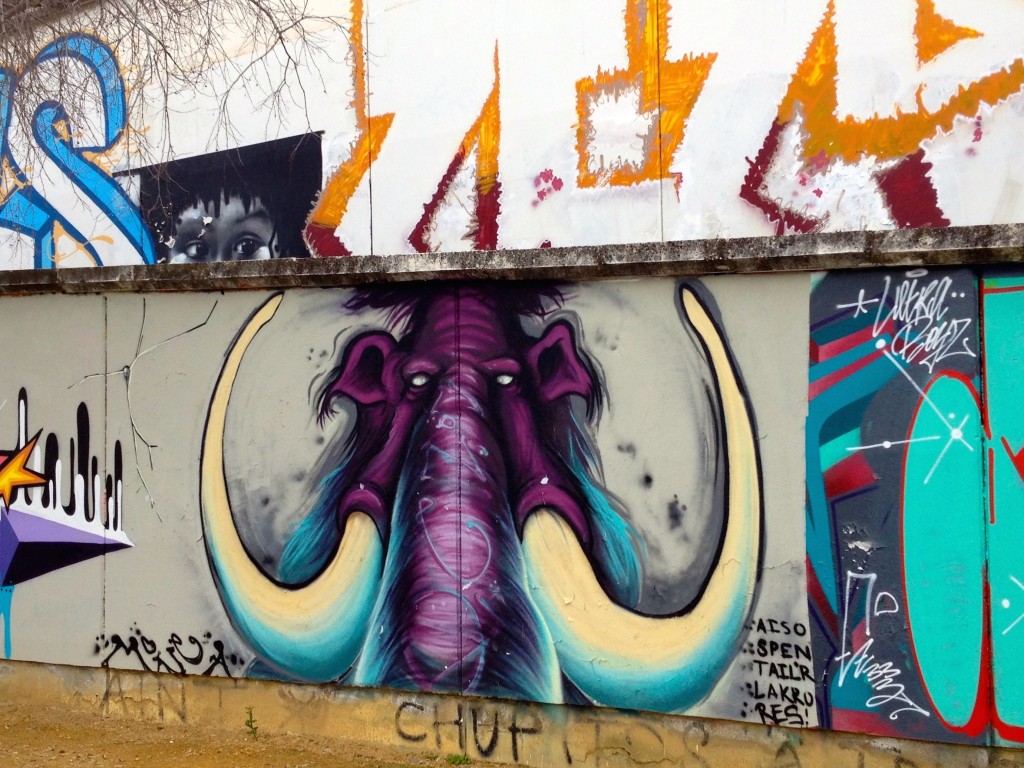 Honestly, who can resist a purple woolly mammoth? 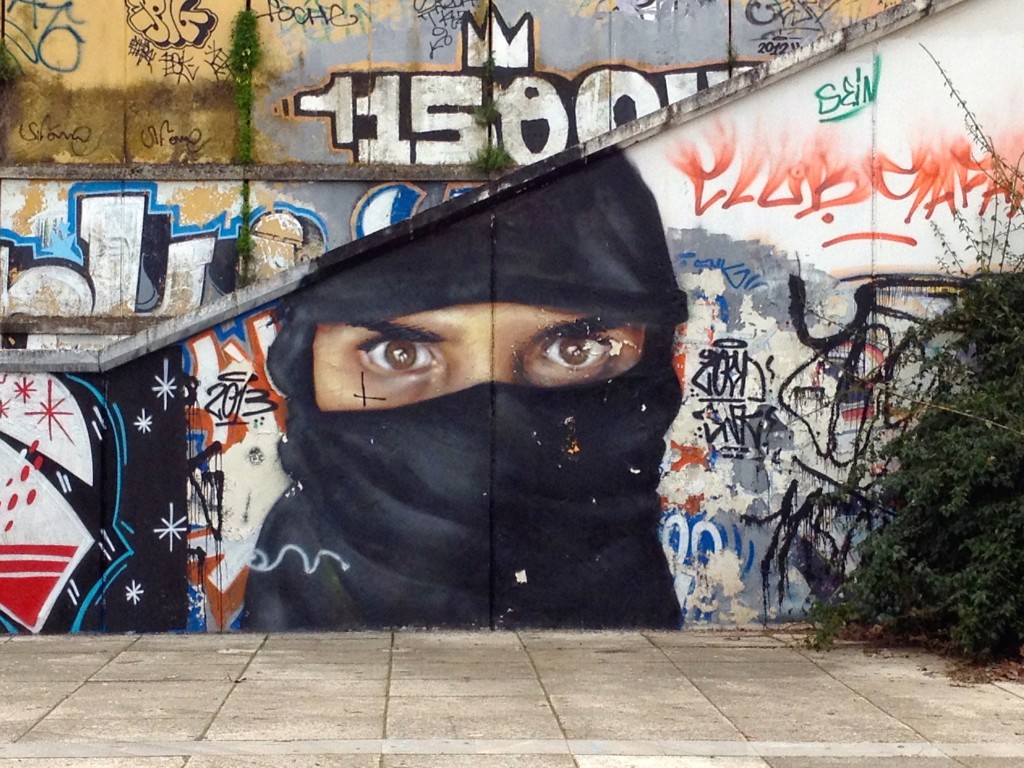 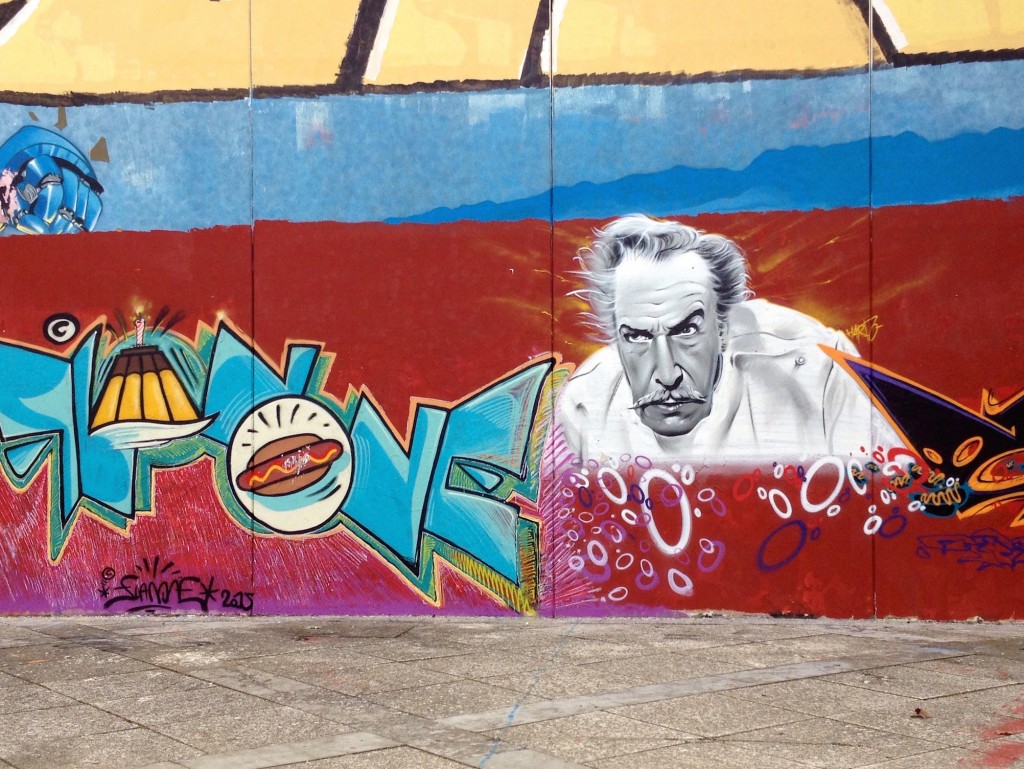 This guy is Kevin’s favorite. Notice the hot dog on the left. Scroll down to read about Sevilla’s elusive Hot Dog Artist. 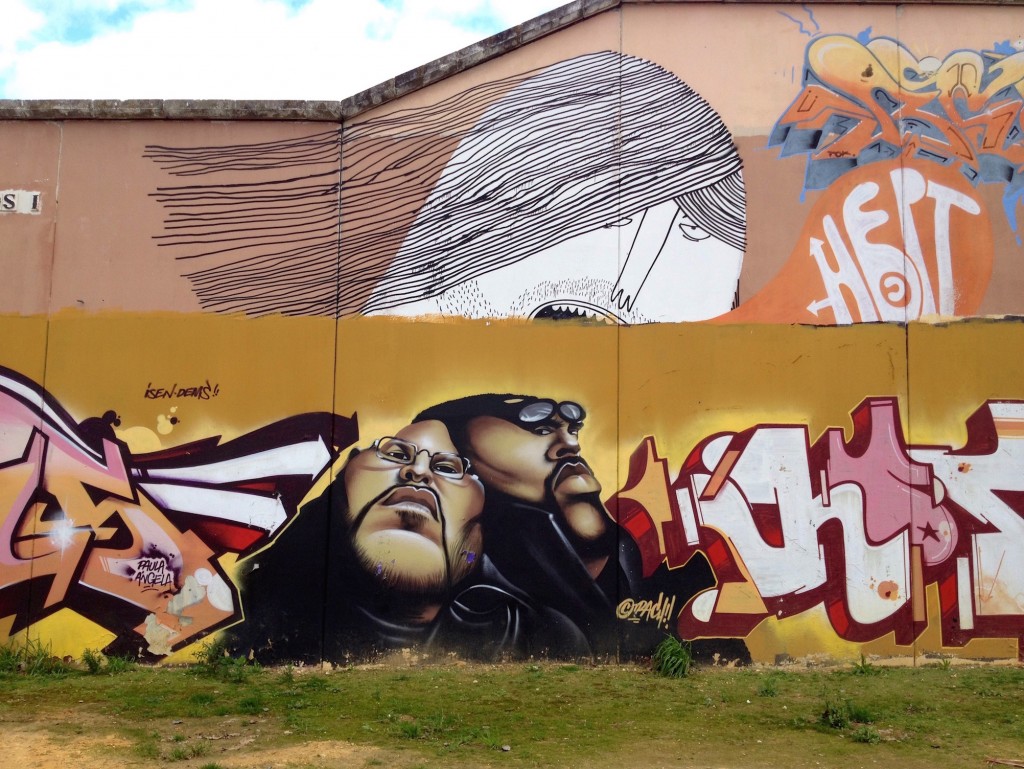 I love both of these – the guys at the bottom, and the totally random black and white cartoon on the top. 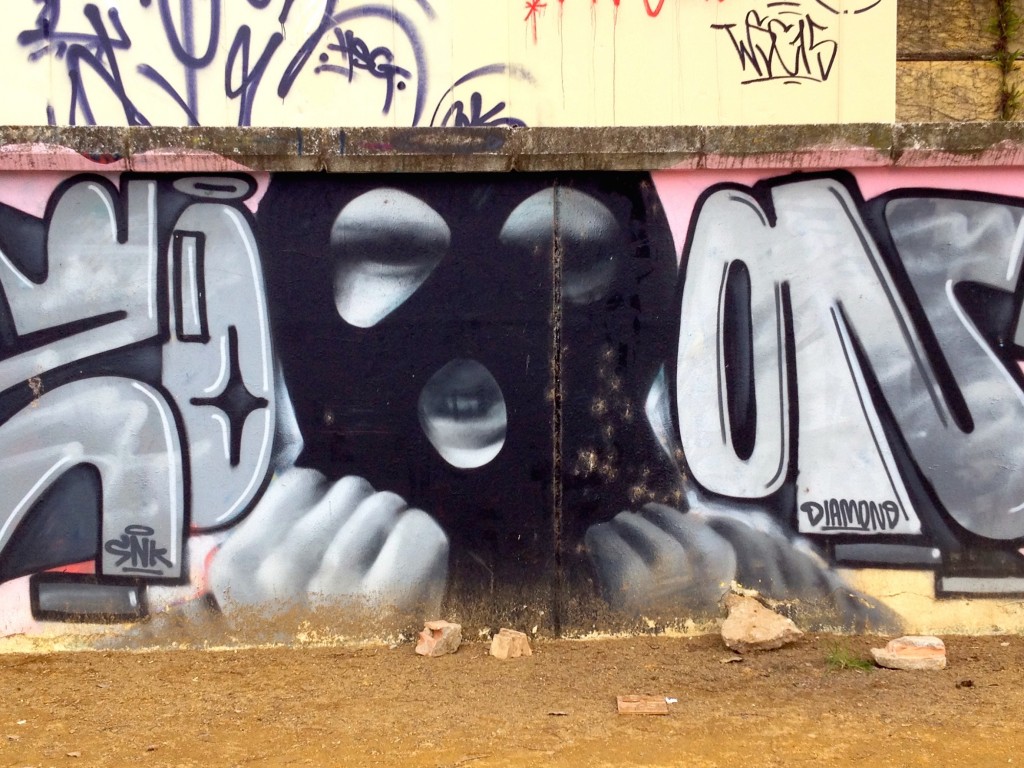 I thought this one was interesting. 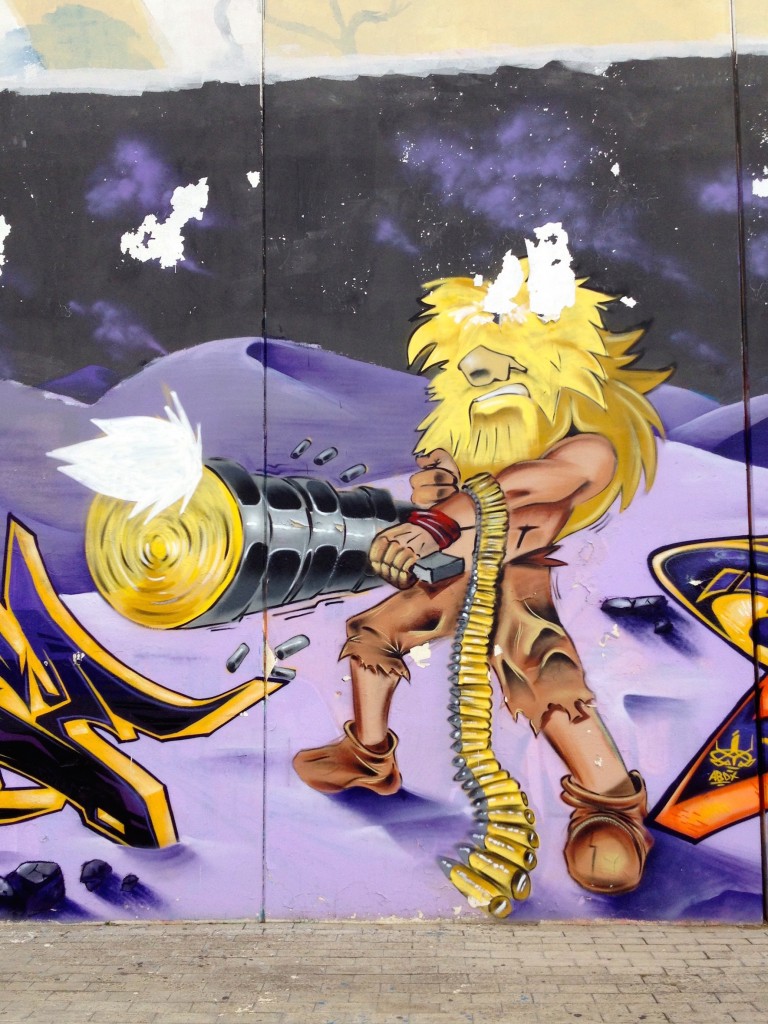 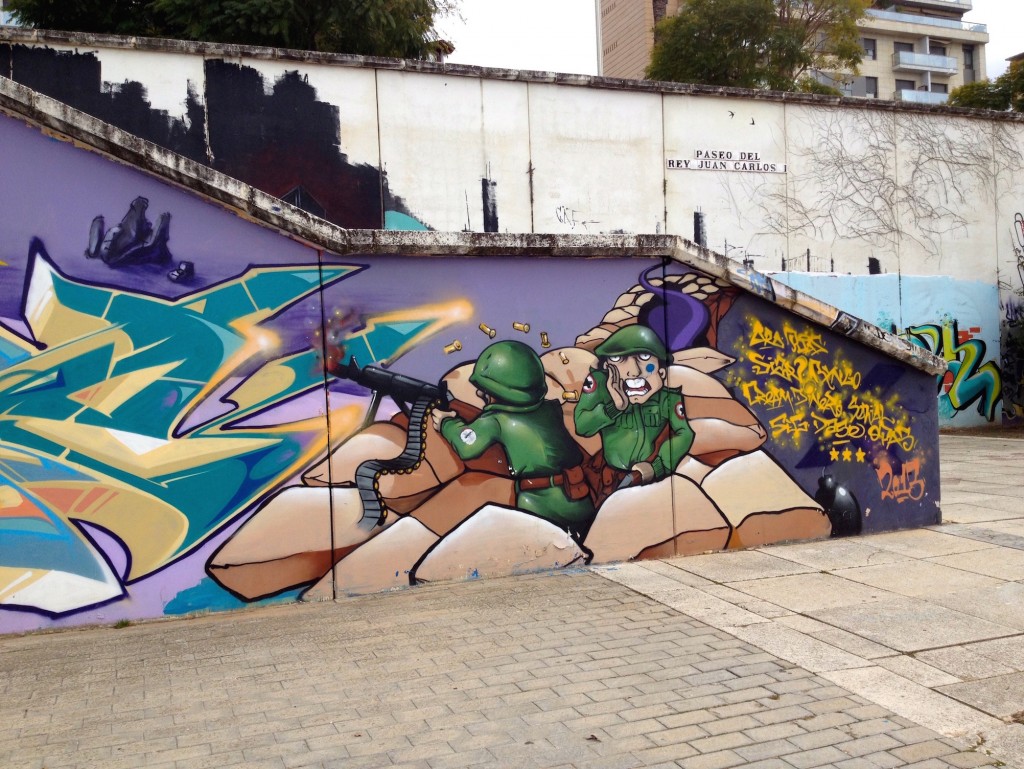 Maybe this one is making a statement about war that I’m not fully getting. I thought it was interesting. 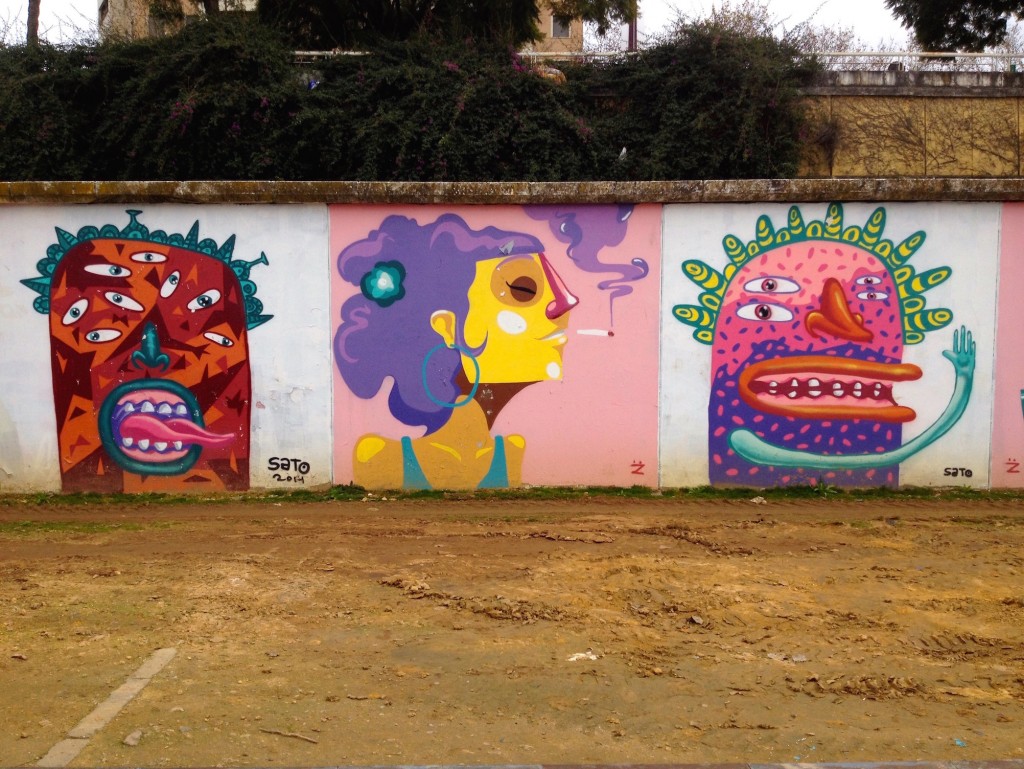 Added this to the collection because it never failed to make me chuckle. 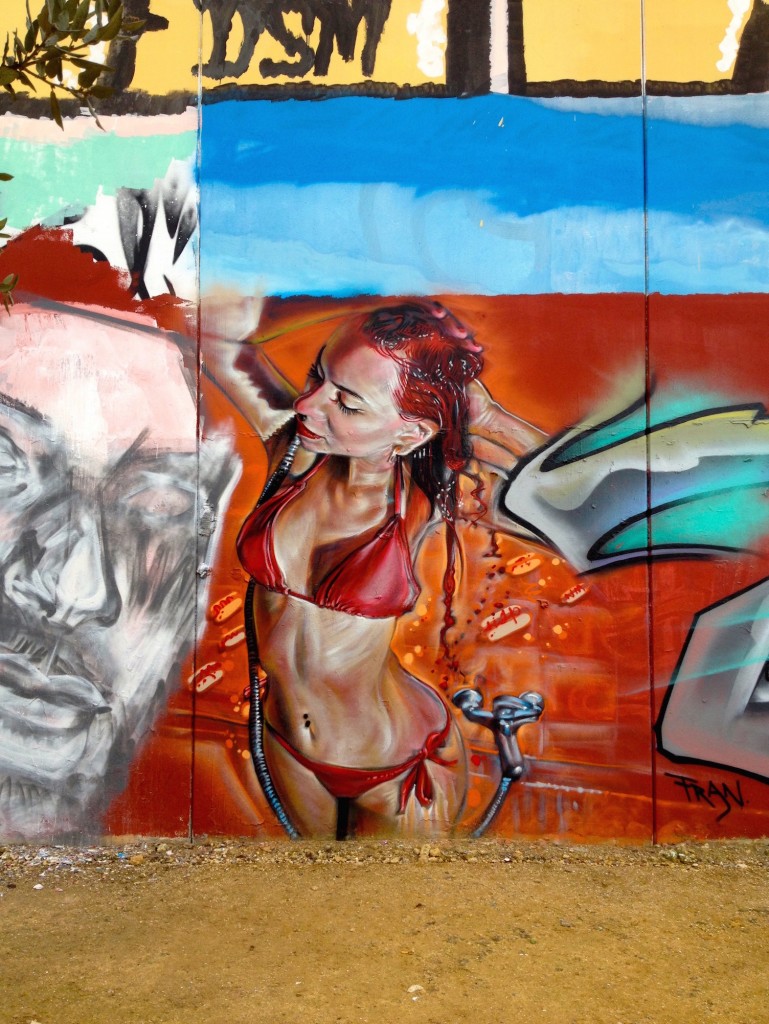 This one’s probably PG-13, but it had to be added because of the incredible detail.

Sevilla also has its fair share of just “vanilla” graffiti. Some if it is inspirational: 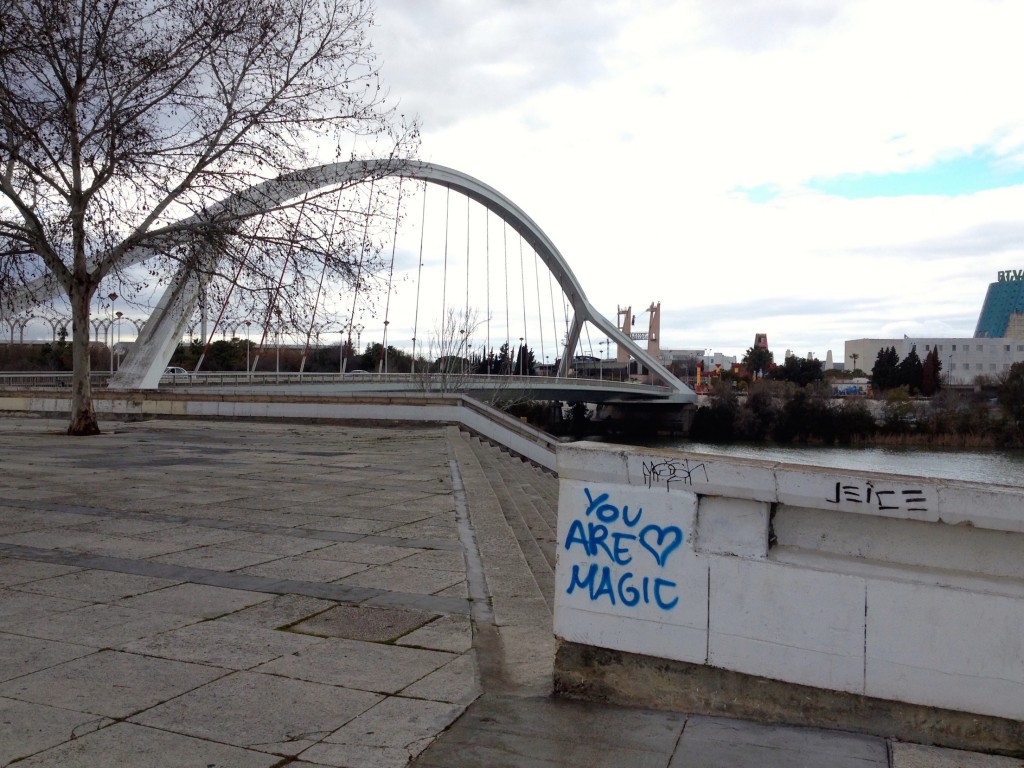 You are magic. This inspirational piece of graffiti greeted me every single time I went out for a run along the river!

Sometimes the plain Jane graffiti made me a little sad, because people defaced some of Sevilla’s amazing old doors. If you know me, you know I’m a sucker for giant, old doors. Shame on whoever decided to tag these ones: 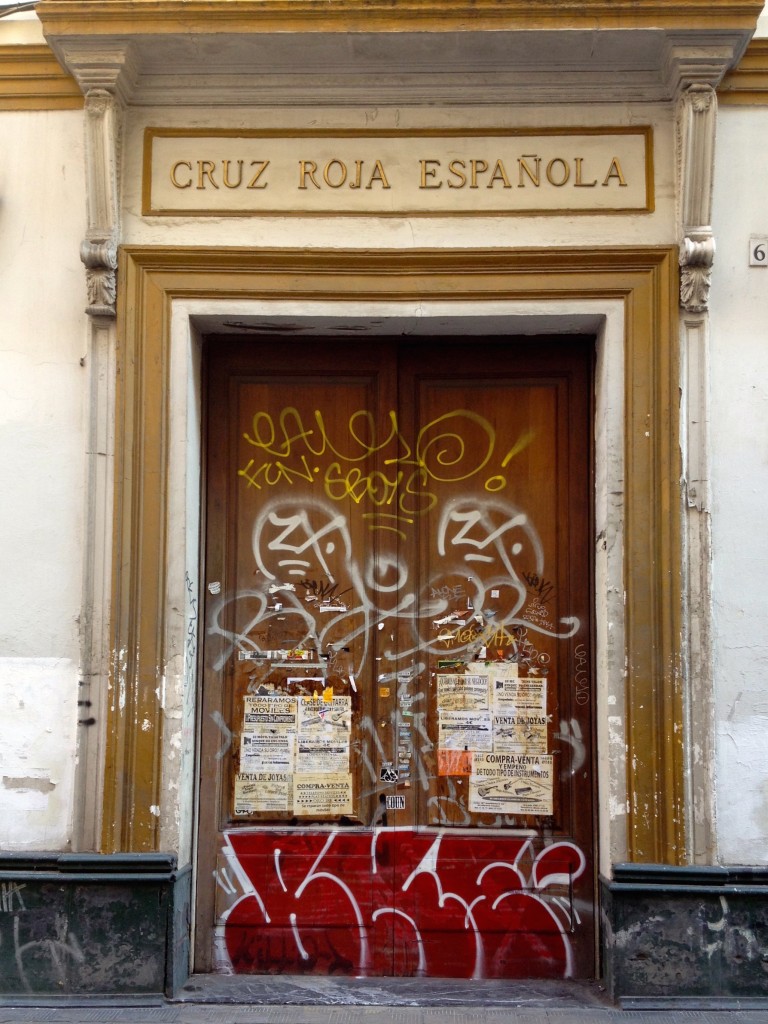 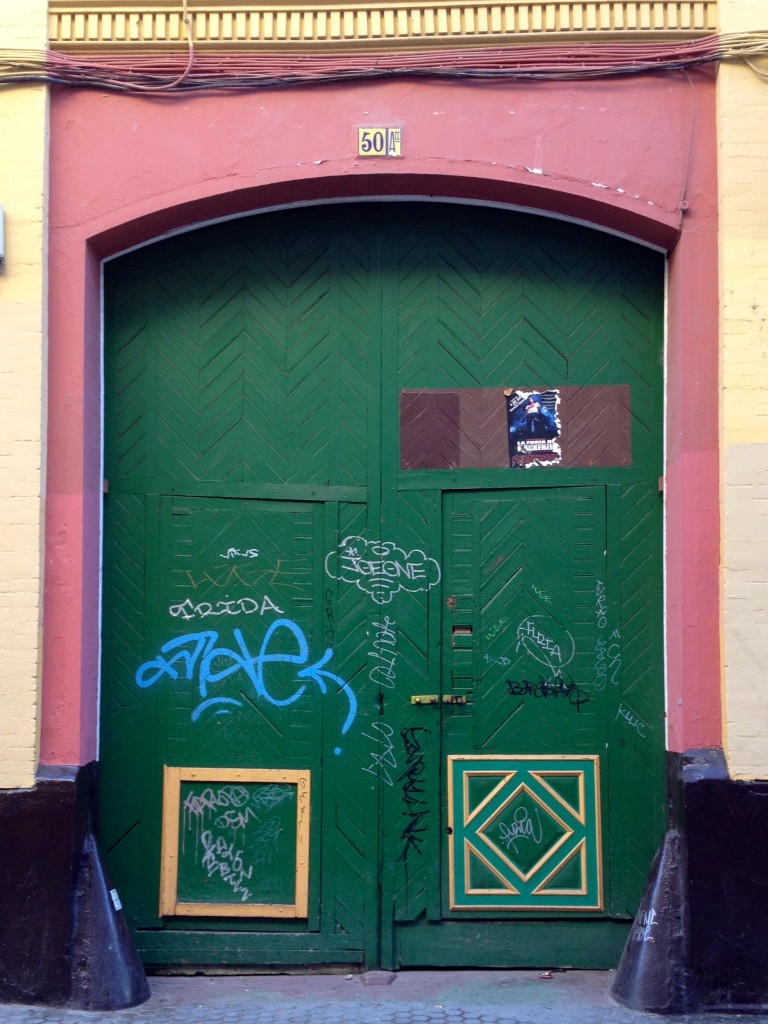 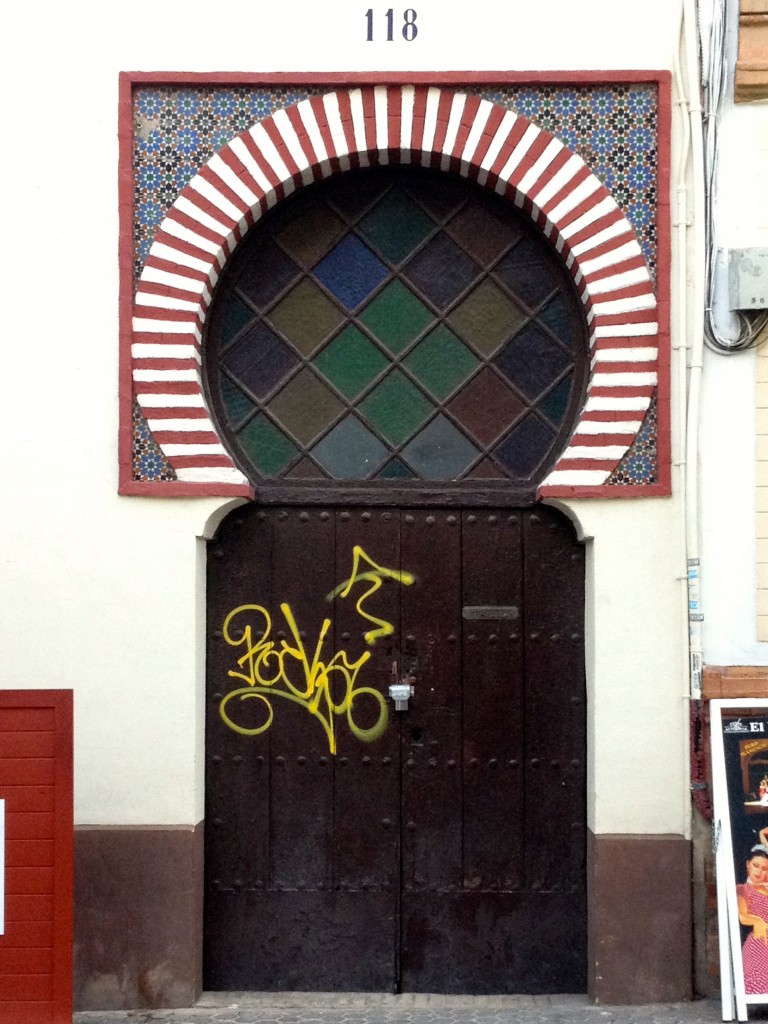 The Attack of the Hot Dog Artist

Sometimes, graffiti is just hilarious. There is an elusive graffiti artist scampering all over Sevilla plastering it with HOT DOGS. Yes, hot dogs. Here is some of his/her work:

A classic example of your typical “hot dog” graffiti in Sevilla.

Once I started watching for it, I found hot dogs all over the city. Rarely would we go more than a day without spotting one in a new location. It was absurd, and amazing. 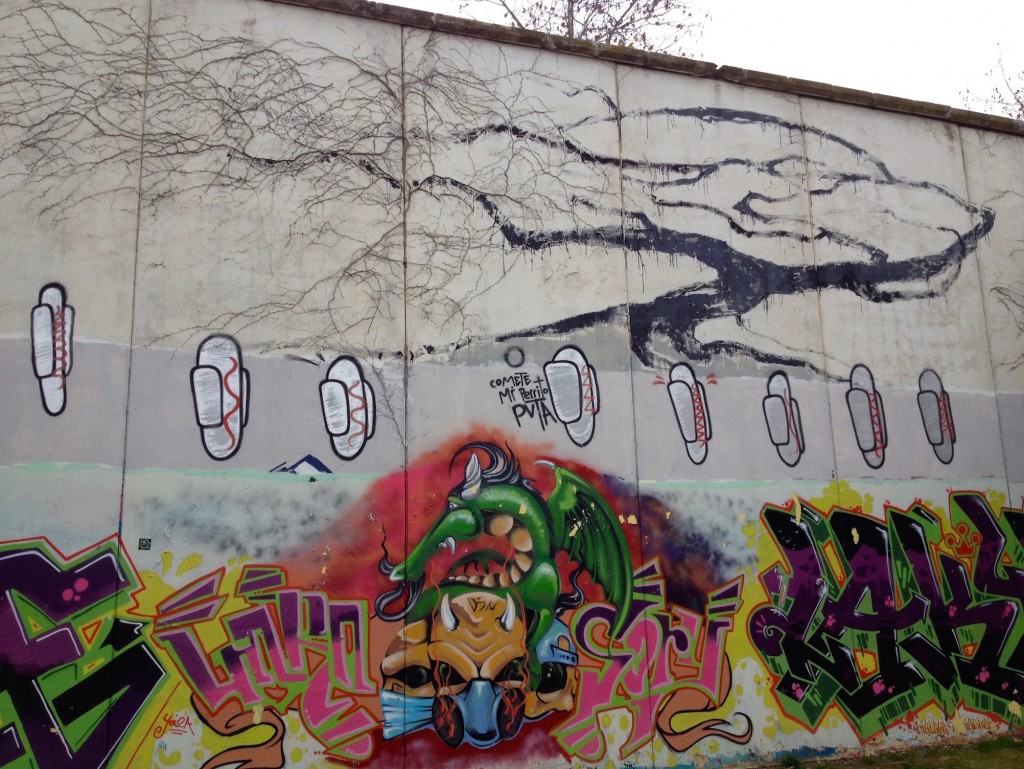 And here it is, the Pièce de Résistance, what I have dubbed the “Parade of Hot Dogs”, located by Sevilla’s River.

I hope you enjoyed a quick tour of Sevilla’s fun graffiti. Have you visited a city where graffiti was a big part of the local culture? Leave us a comment and let us know!