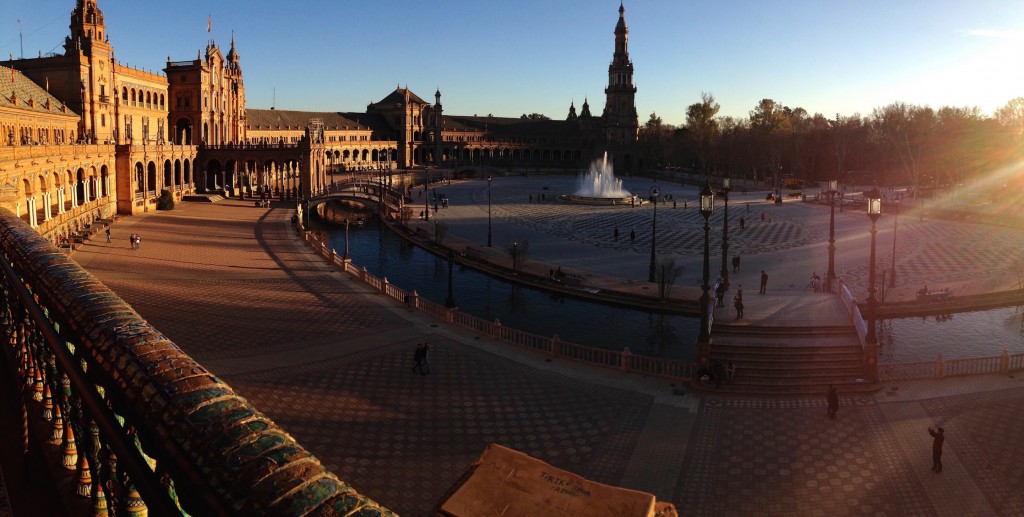 Sevilla is an absolutely fantastic place to be based for a few weeks! In addition to its wonderful churches that I wrote about in my blog post last week, it is packed with other fun sights. Our three favorite Sights in Sevilla (coming in behind the Cathedral, of course!) were the Royal Alcázar (Sevilla’s Moorish Palace), the Plaza de España (a fun outdoor area where people relax and socialize), and the Bullring. 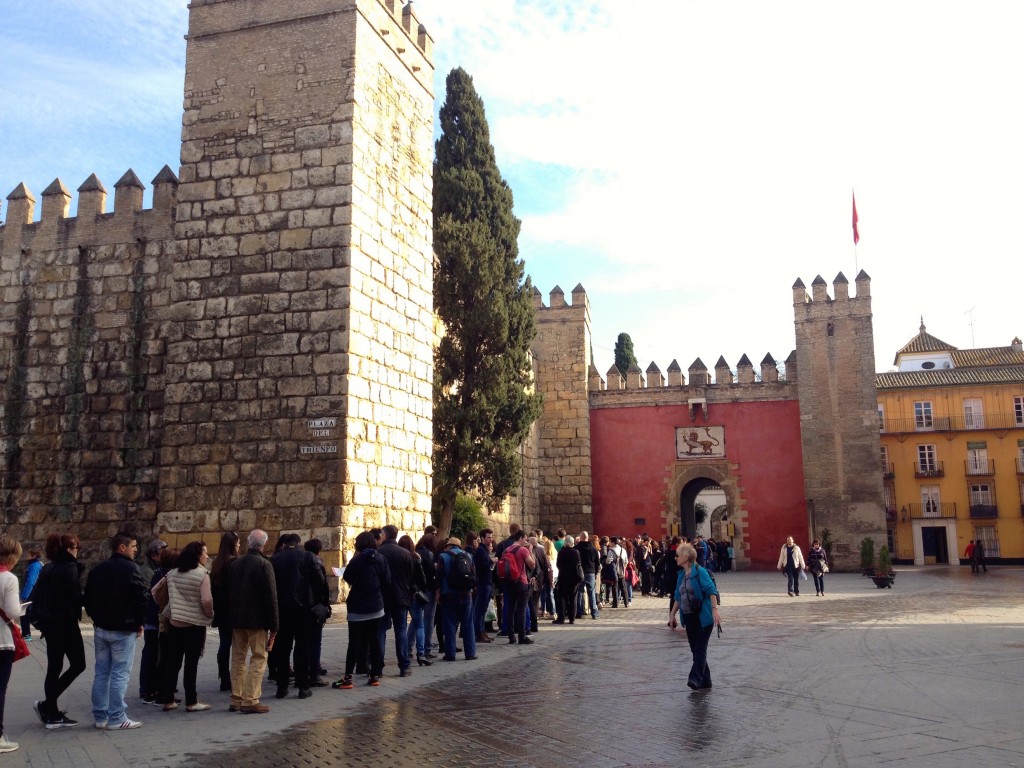 The Entrance to the Alcazar – check out this line!

I’ll be honest, we mostly wanted to visit the Alcázar because some scenes for next Season Game of Thrones were just filmed there. In fact, filming wrapped up just a couple months before we arrived in Sevilla! Fellow Game of Thrones fans, keep your eyes peeled during Season 5 episodes set in Dorne’s Water Gardens. Those scenes are Sevilla’s Alcazar! 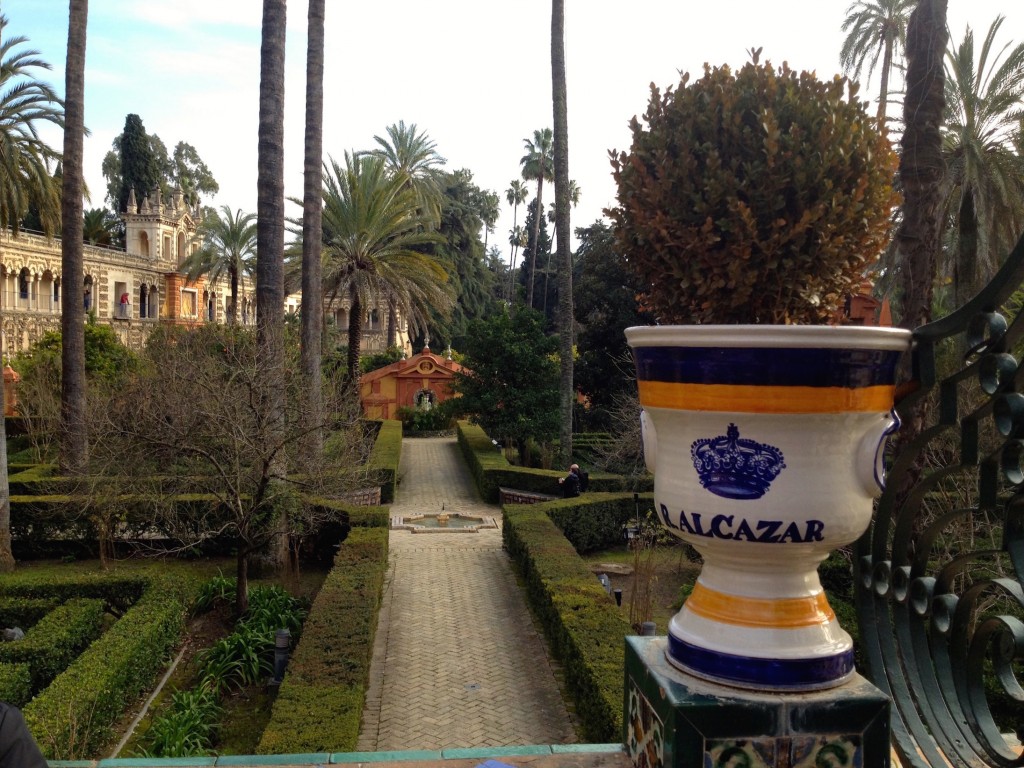 Gardens at the Alcazar

Even if you aren’t a huge Game of Thrones fan, the Alcazar will still knock your socks off. (I’m being very literal. I am literally wearing only one sock at this moment.) Between the beautiful gardens, the amazing history, and the opulently decorated rooms, you’ll find something to enjoy. 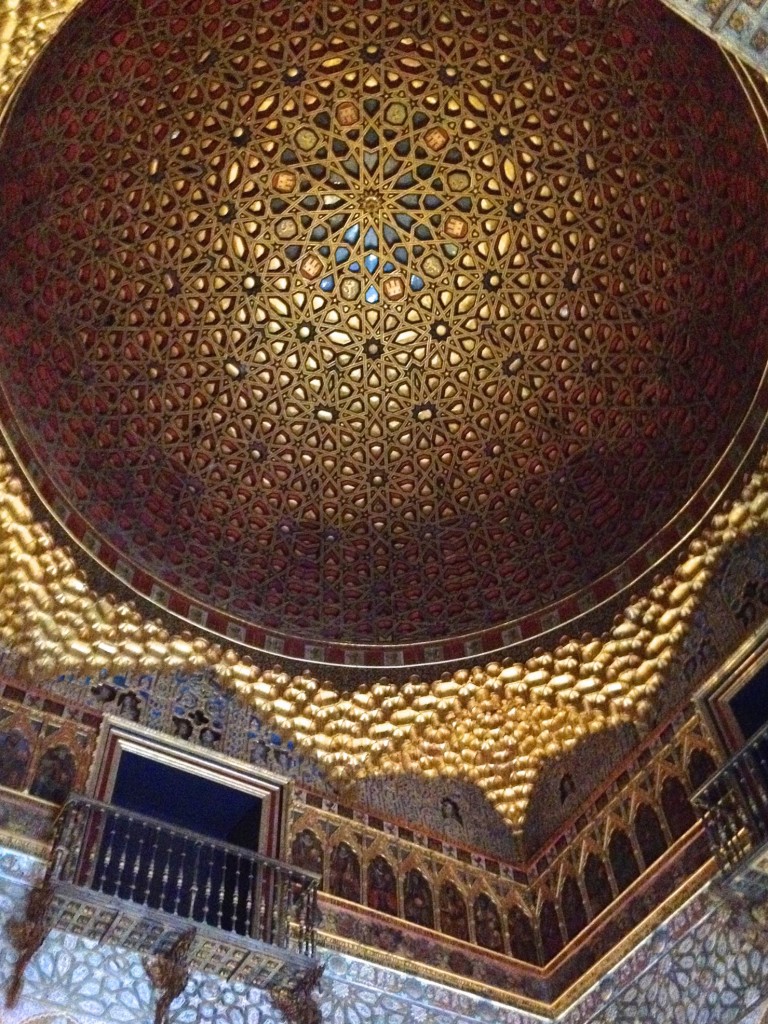 Look at the Roof! Amazing.

The Alcazar was originally a 10th century Moorish palace, and is the oldest palace in Europe that is still in use! The Alcazar feels a bit like a miniature version of the Granada’s more famous Alhambra, but along with less fame comes fewer crowds – music to my ears! 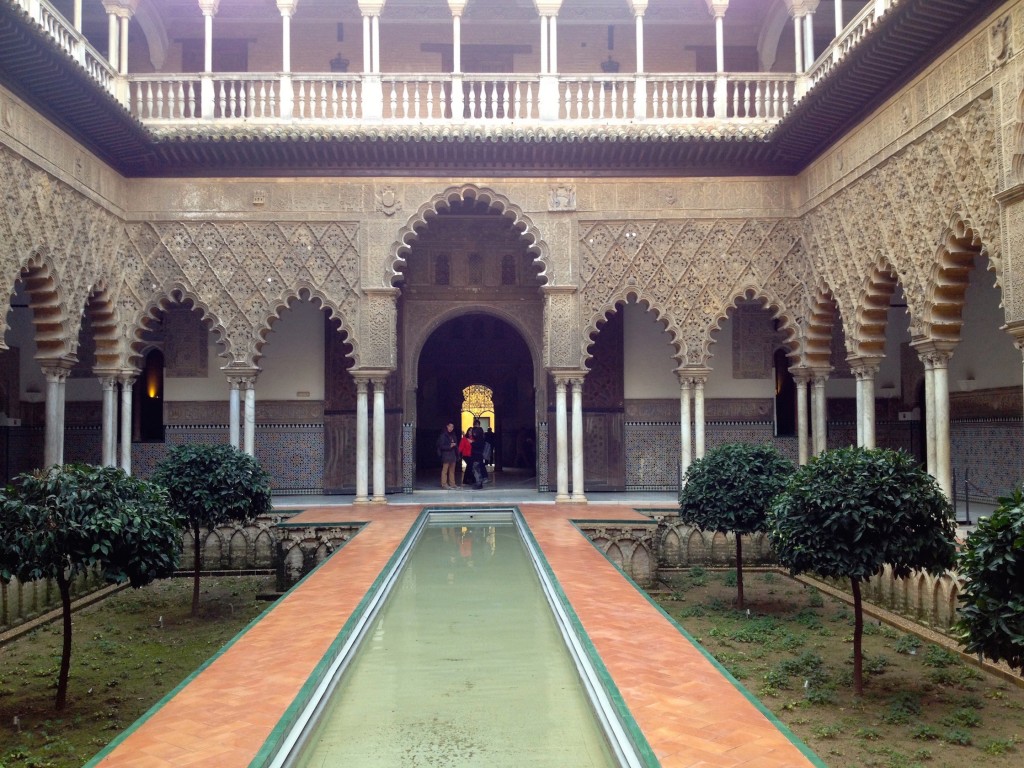 The Alcazar – LOVE this Courtyard. 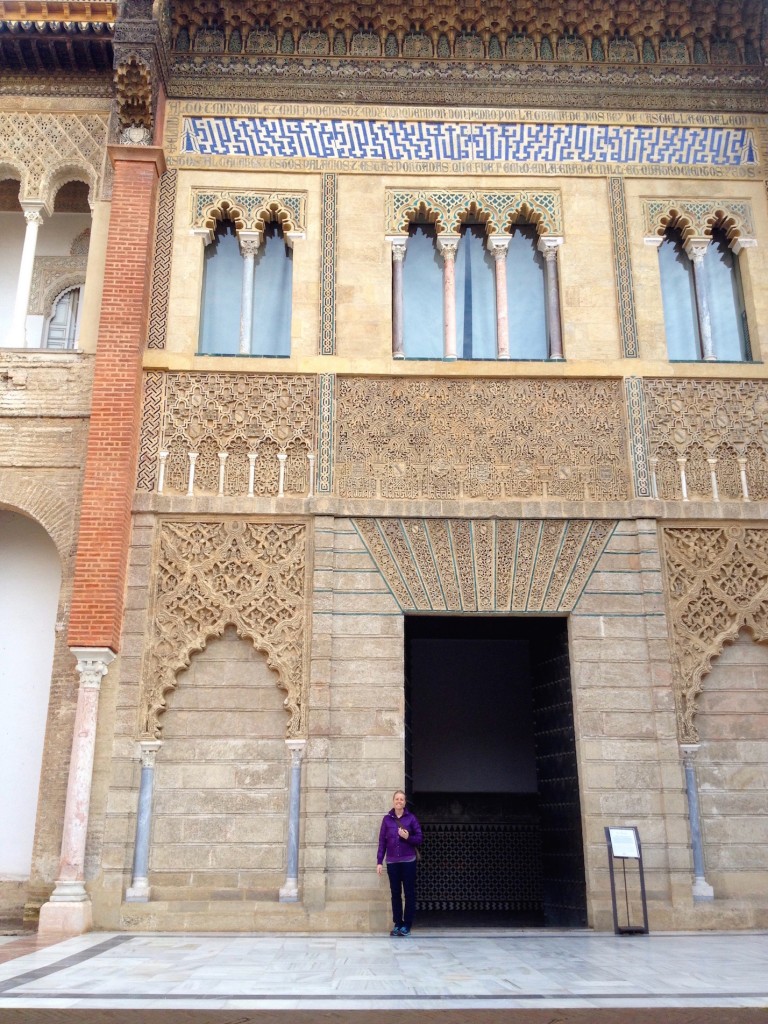 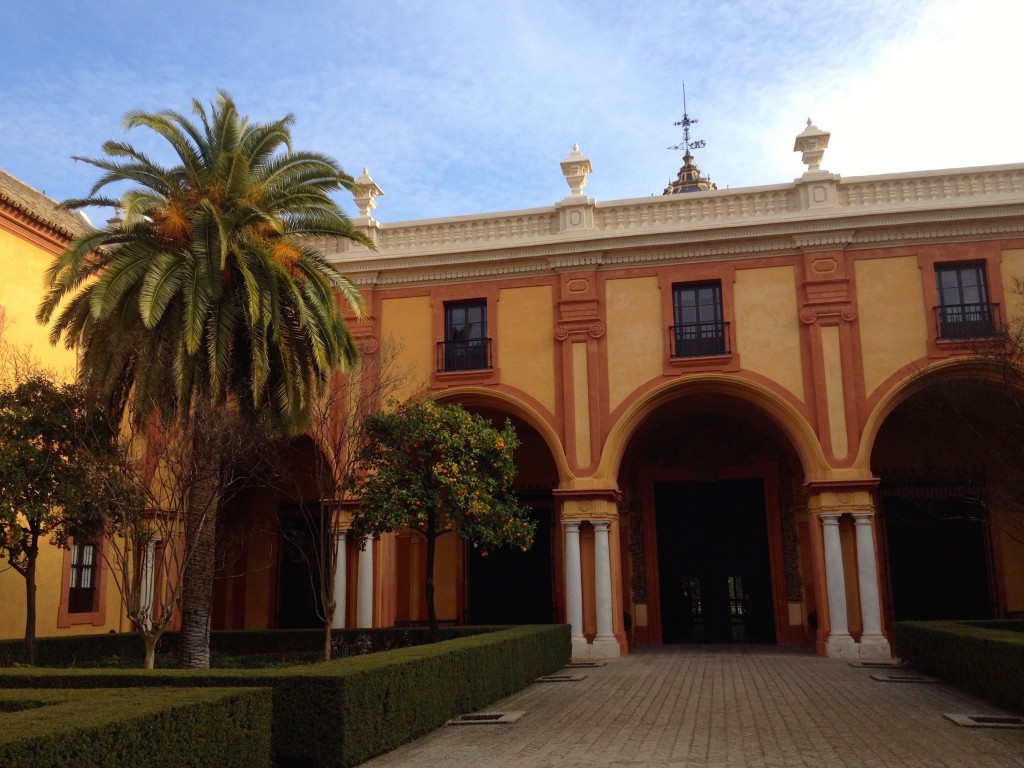 Tourist Tip: The Alcazar has free entry every Monday for the last hour it’s open! (Hours vary between Winter and Summer, so be sure to check their website.) The line can get quite long for free-hour even in the Winter, so we recommend you arrive early if you’re planning to make that your only visit. If you love palaces, it’s worth it to just pay the full €9,50 to go in during non-free times. Otherwise, you might find yourself wishing you had more time to explore!

By far our favorite part of the Alcazar was the gardens: 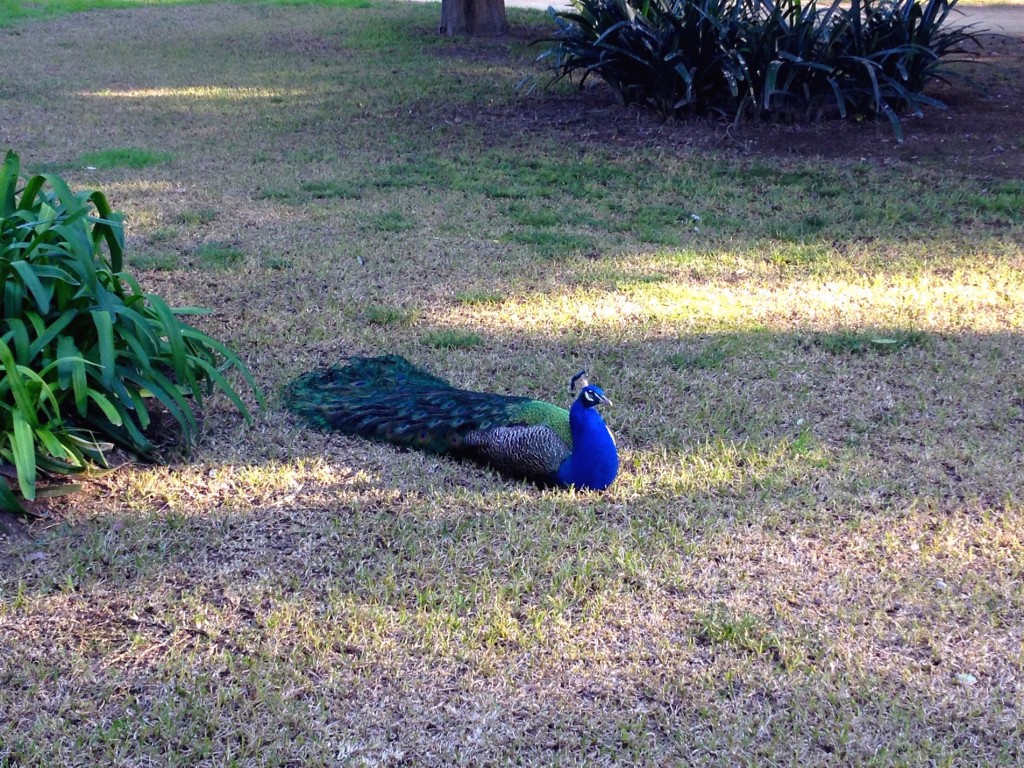 There was a family of Peacocks! 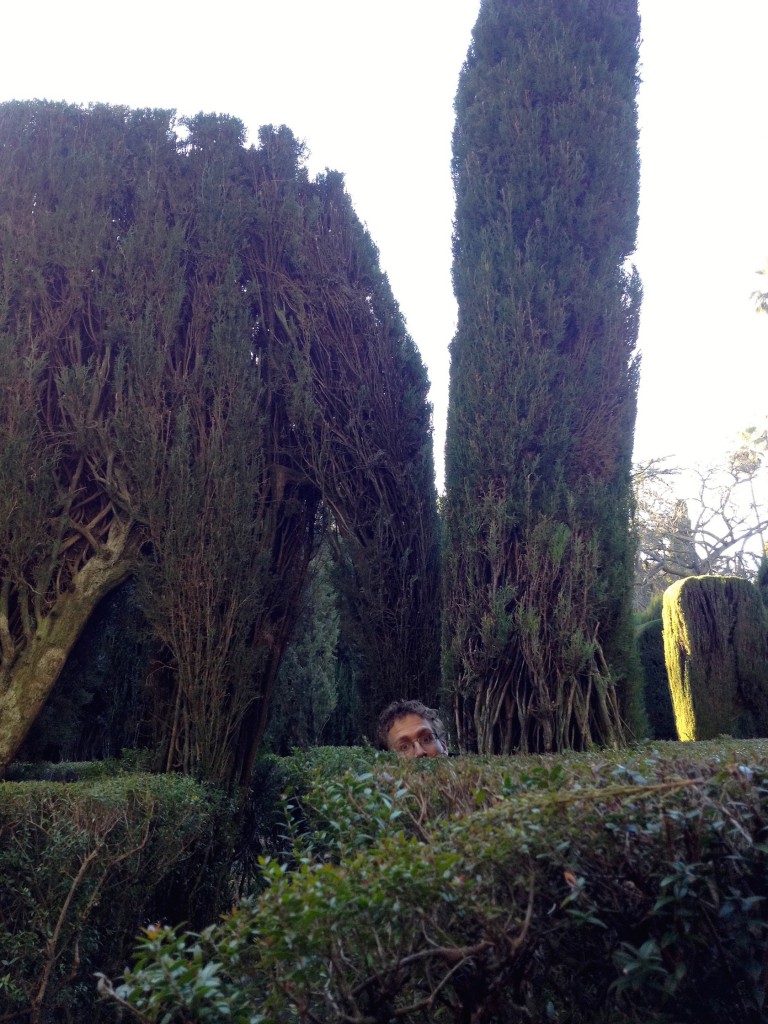 Can you find Kevin? We got lost in the maze. It was a-MAZE-ing. 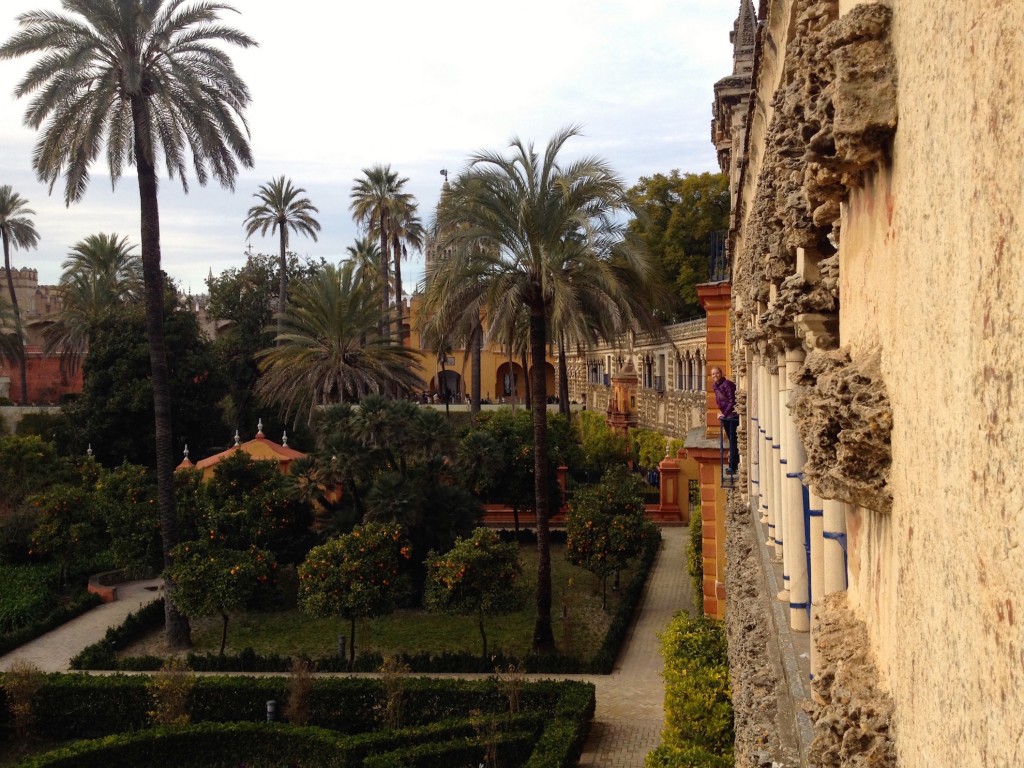 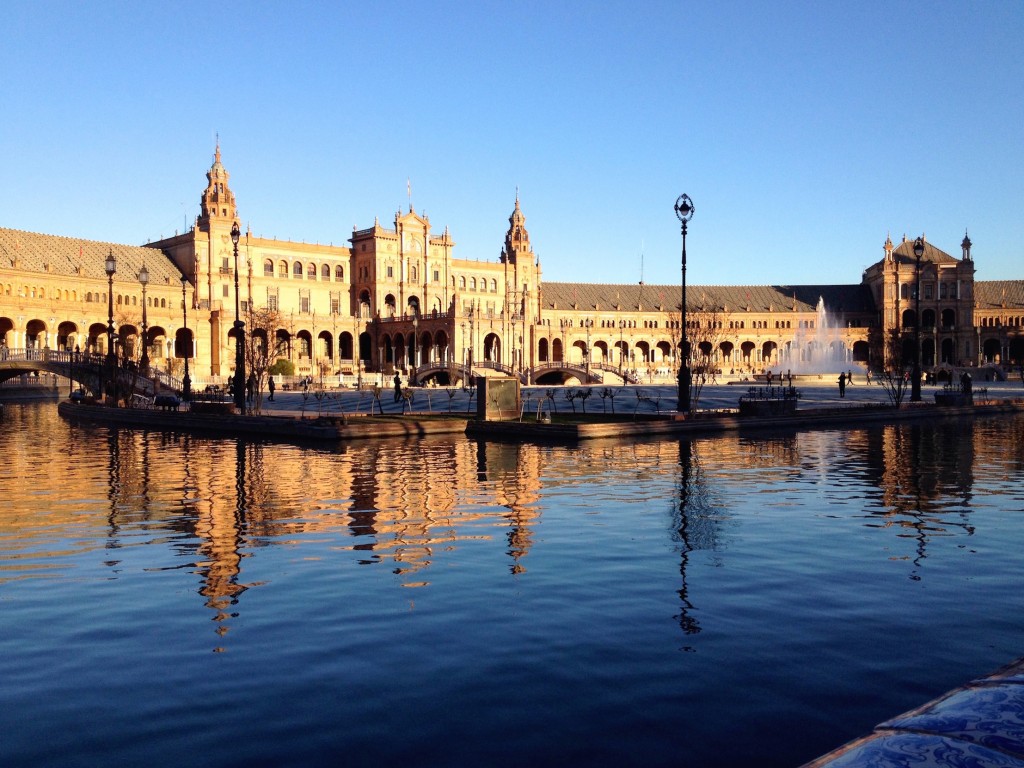 I’m calling it. Plaza de España is the best place in Sevilla to catch a sunset. According to the travel books, it might also be the best place to be conned or pick pocketed in Sevilla, so bring your paranoia along with your picnic. 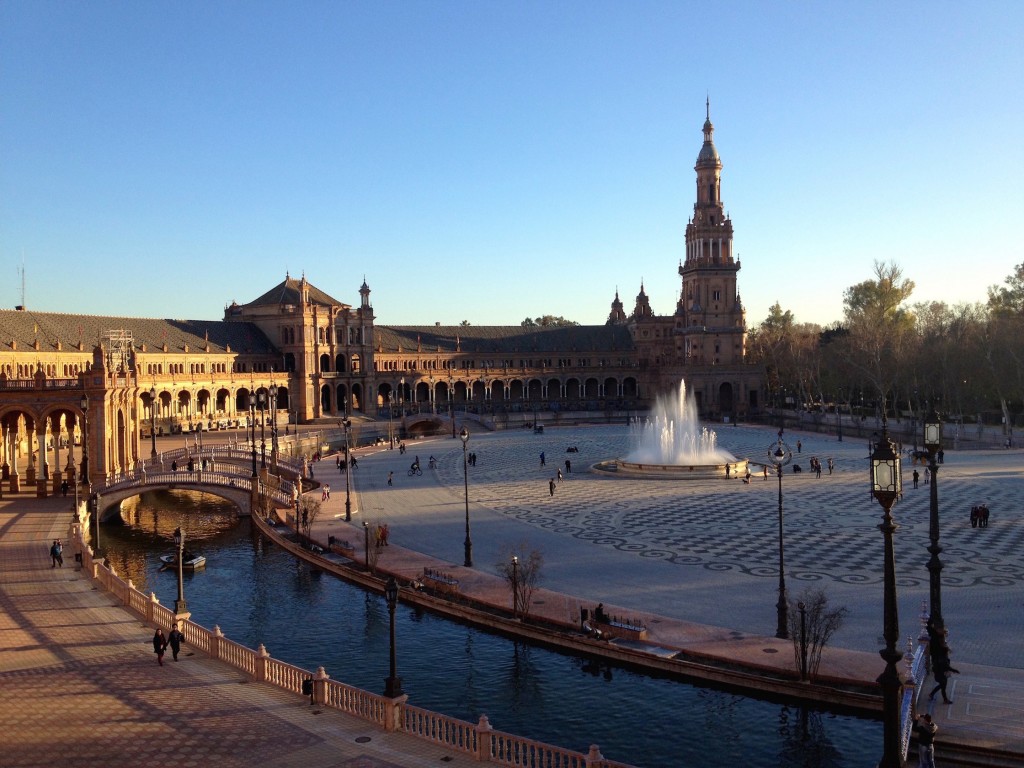 Check out this view! Perfect for sunset light.

The Plaza de España is a big square and ring of buildings that were built next to a cute Park for a 1929 international fair. There’s a big, beautiful fountain in the center of the square: Also, you can easily hire yourself a horse and carriage ride from here: 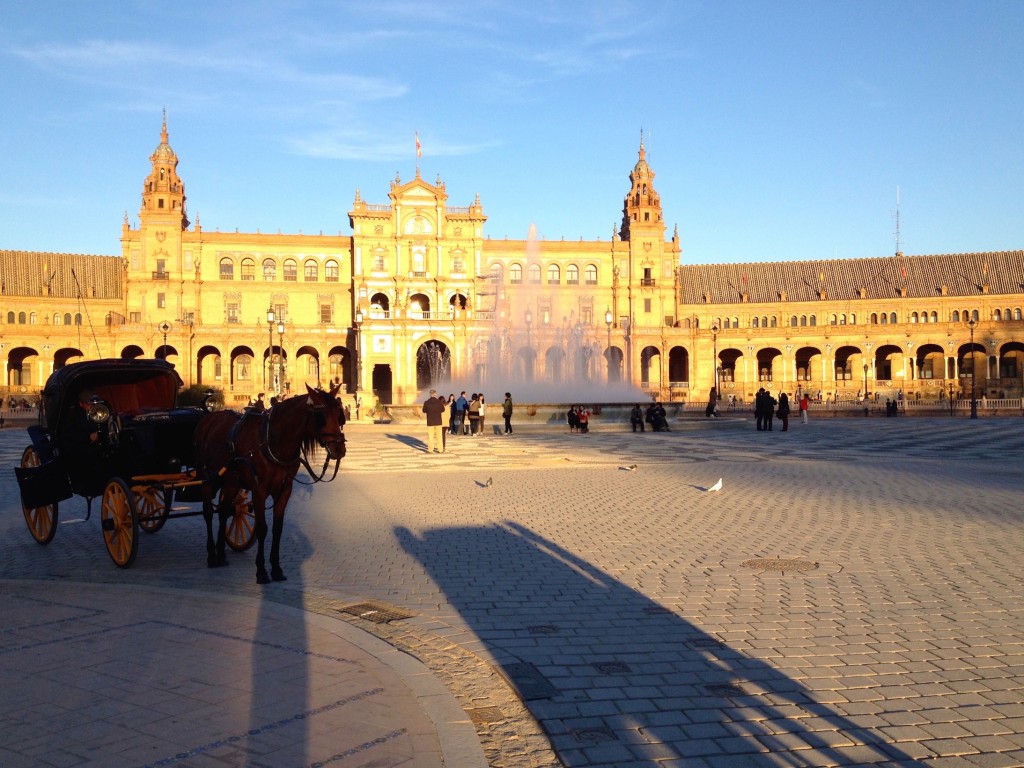 You can also rent a boat to paddle around the small man-made moat/river, or you can just climb the stairs, enjoy the sunset, and laugh at other tourists trying to paddle around. We watched a group of three ram their boat into the wall repeatedly. Sigh. You know it’s photo-worthy when Kevin busts out his iPhone to take pictures!

The highlight for many at Plaza de España is the amazing tilework on the buildings. 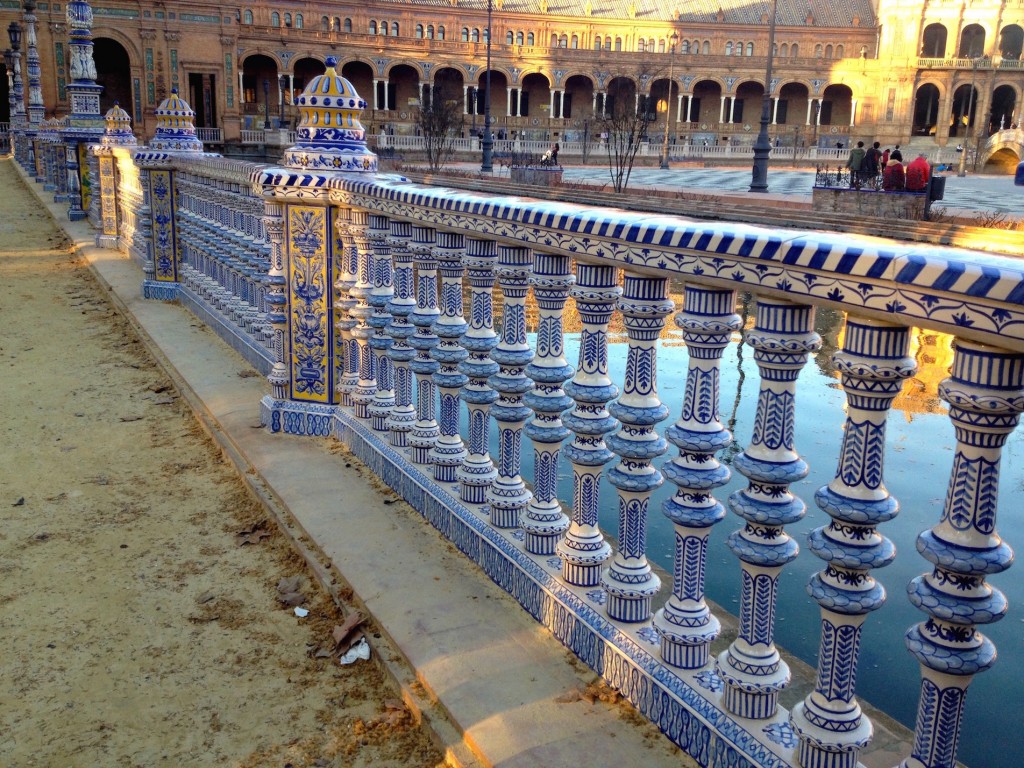 Check out some of this tilework!

On the ground level, dozens of alcoves are covered in elaborate tilework scenes representing each of Spain’s many provinces. If you’re in Sevilla and it’s a nice sunny day, pack a picnic and head over to the Plaza de España to relax and people watch, you won’t be sorry. This was the last touristy outing we had in Sevilla, and man would we have missed out if we’d skipped it. It wasn’t bullfighting season in January when we were living in Sevilla, so there were no actual bullfights. To be honest, I’m not sure I would want to attend a bullfight now that I know the sequence of events of a bullfight that ultimately culminates in the bull’s bloody death. However, I didn’t have any problem visiting the ring itself and learning about bullfighting in their small museum. Check out the brick seating – would you be able to sit through a 3-hour bullfight here?

The Plaza de Toros is the 2nd oldest bullring still in use today. It took 120 years to build, and was finished in 1881. It costs 7 euro to visit (though you can go for free on Mondays between 15:00 and 19:00). A paid visit to the Bullring comes with a guided tour of the ring itself, as well as the museum. Our guide was fabulous, spoke perfect English, and made lots of jokes. She showed us around the ring, took us through the Museum, told us all about the history of bullfighting, showed us the Bullring’s Chapel, and ended the tour at the horse and bull stables. The Bullring’s Chapel, where bullfighters and their crew members say their prayers before they enter the ring. This cow has an interesting story. She’s the mother of a bull that killed one of Sevilla’s most beloved bullfighters. In order to stop the lineage and prevent any more evil bulls from being born, they killed her and had her head mounted on the wall. Look at these elaborate bullfighting costumes! The closest one is 60 years old, the further one is just a few years old. At minimum, bullfighter outfits cost 3000 Euro! A statue inside the museum. Back in the day, one of the Kings tried to soften the sport of bullfighting. Instead of fighting bulls, they would joust and try to spear wooden heads like this one. Crazy, right? We loved the Bullring visit!

One thought on “Top Sights in Sevilla”