I thought I’d embed this fun interactive map of our travels here, since this is part of my travel discussion series.  (View Full Size Travel Map at Travellerspoint)

This post is Part 2 of a 3-part series on Travel.  I made a shameful admission last week that Kevin and I have recently discovered we might not like to travel.  (GASP!)  But there’s hope!  A new travel movement called “Slow Travel” is sweeping through the backpacker and digital nomad communities.

What is Slow Travel? 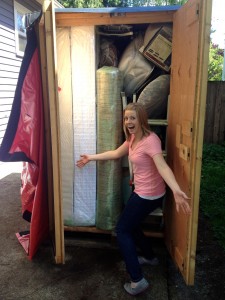 This is how to pack for an extended period of Slow Travel.

The Slow Travel movement is something that is quietly becoming a “thang” in our generation.  (I may have made that word up, but I use it all the time, so therefore it is real.  I define a “thang” as a popular trend.  Used in a sentence: “Skinny jeans are a thang now.”)  Slow Travel sprung out of the Slow Food movement, which began in the 1980’s in Italy as a protest against the opening of a McDonalds in Rome.  Instead of a manic 2-week vacation schedule, packed to the brim with tourist stop after tourist stop, slow travelers try to base their travels in one location and spend their vacation at a much slower pace.  Think about how relaxing it could be to rent a small home in Tuscany and spend your morning at the local farmer’s market, your afternoon reading at your favorite coffee shop, and evenings cooking dinner and enjoying a bottle of wine on your terrace.  In the US, slow travel is manifesting itself as a renewed interest in historic two-lane roads, like Route 66. 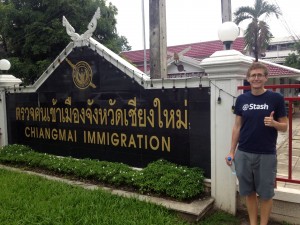 Traveling Slowly means you get to make fun trips to immigration. YAY.

Slow Travel is all about getting to know local people and learning about the culture in a new place instead of checking as many destinations as possible off of a list.  The biggest perk of all?  Slow Travel can be a lot easier on your wallet.  When you rent a place by the week or month, the nightly rates tend to drop dramatically.  Also, traveling slowly tends to mean you get off the tourist trail a little bit.  This can save money in restaurants and shops.  We’ve noticed that in Chiang Mai, a food and groceries tend to cost almost twice as much in the tourist areas compared to the neighborhood where we live.

How Do We Slow Down? 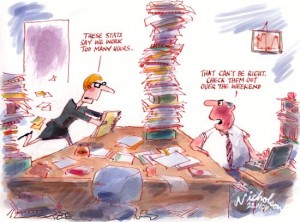 Did you know that the United States is the only developed country in the whole world that doesn’t require a single legally required paid vacation day or holiday?  According to a USA Today article published in 2013, workers in the US have an average of 16 paid days off per year, while the average in Austria is a whopping 35 days!  I was shocked to read that one in four Americans doesn’t receive a single paid day off.  Here’s a peek at some paid time off statistics from around the world.  Warning, the data in this table may make you feel angry/sad/jaded:

I don’t want to hate on our American culture too much here.  I mean, America is the home of so many things I truly love:  Chicago style deep dish pizza, wheel of fortune, Bluegrass music, the Super Bowl, incredibly beautiful National Parks, apple pie, walkable cities, lemonade stands, Thanksgiving, fantastic comedy (Louis C.K., Jon Stewart, Parks & Rec, Saturday Night Live, I could go on and on…), Hamburgers and Hot Dogs, craft beer, and good BBQ.   I just think it’s sort of ironic that having an American passport enables you to travel nearly anywhere in the world, but being American means you probably don’t have the time to do it.

Is There a Solution? 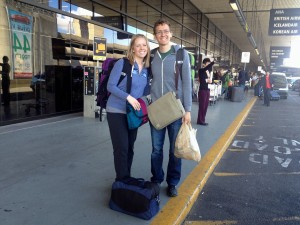 Here we are at Seatac Airport in April, leaving for our big adventure.

Vacation limitations are a huge part of why Kevin and I quit our jobs and moved abroad.  As my infamous vacation usage spreadsheet grew and grew, we realized that we’d have to wait until our mid-forties to have kids if we wanted to get through our travel list first. We feel so lucky we were able to save up to do this, and even luckier that there are places like Chiang Mai where we can stretch our dollars many times further than we did back home. 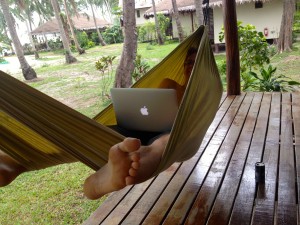 Slow Travel Pro Trip: Learn to work from a hammock!

So is there a solution to the never-having-enough-vacation problem?  Unfortunately, it feels like a cultural shift needs to occur in America for anything to change.  I think there’s hope, though!  More and more companies are shifting towards an “unlimited” vacation model, allowing employees to take as many vacation days as they want as long as they get their work done.  It’s becoming increasingly common at newer companies.  Evernote, a tech company, took things a step further, according to a Forbes article from 2012.  Recognizing that taking time off actually makes employees more productive, Evernote began offering employees $1,000 per year to spend on their vacations!  FullContact, another tech company, calls this new trend “paid paid vacation”, and offers its employees a generous $7,500 per year!  They also stipulate that you must truly unplug, and don’t allow their employees to work remotely while they’re away.  I like it.

What do you think about the current vacation policies in America?  Do you think we’re moving in the right direction?  Where do you think things will be in a few decades?

4 thoughts on “The Art of Slow Travel”