This is the last post of my 3-part series on Travel. In my first post, I revealed we’re no longer in the honeymoon phase in our love affair with Thailand. Last week, I shared some thoughts on Slow Travel. This week, I want to pitch a new idea – the Unconventional Staycation.

Do Vacations Make Us Happier? 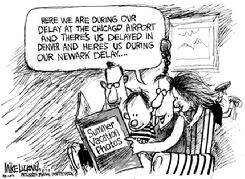 Do vacations make us happier?  Shockingly, the answer for most people is no! According to a study performed by researchers in the Netherlands, vacationers were the happiest before their vacations. The researchers found that people derive the most pleasure from the planning, anticipating, and looking forward to their travels. The study found that vacation anticipation boosted happiness levels for eight weeks, but that happiness dropped back to the baseline level for most people as soon as they returned home! The only people who reportedly had higher levels of happiness after returning from vacation described their trips as “very relaxing”.

I don’t know about you, but in a world full of flight delays, lost luggage, car trouble, hurricanes, and broken air conditioners, you just about have to win the lottery to be able to describe your getaway as “very relaxing”. Enter a new hair-brained idea… 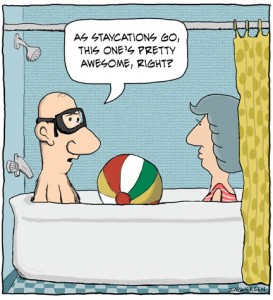 Cartoon by Chuck Ingwersen of wordsandtoons.com

I’d like to pitch a fun idea to you that Kevin’s genius friend Michael came up with. We’ve all probably heard of the concept of the staycation, where you take paid time off of work but opt to stay home rather than travel. It actually sounds like a pretty relaxing idea. You get to sleep in your own bed, don’t have to pay for hotel rooms, no one is going to try to nickel and dime you, and you get to avoid spending 18+ hours on an airplane.

Here’s the new twist – add a cultural bend to your next Staycation. Instead of just spending your week bumming around the house relaxing, use your week off to immerse yourself in a new culture without even leaving your hometown. The US is full of people who have moved here from all over the world, so it’s easier than ever to experience foreign traditions and foods in most cities and towns across America. Rent foreign films, read books about foreign cultures, go out for foreign food, listen to foreign music, throw a themed party (Cinco de Mayo, Oktoberfest, Carnivale, etc…), you get the idea!

She Faked a Trip to SE Asia 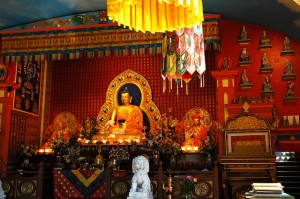 Beautiful, right? This is the Sakya Temple in Seattle!

One girl in the Netherlands took this idea to the next level. For 42 days, she faked a trip to Southeast Asia, fooling all of her friends and family with her Facebook posts showing her awesome trip. She ate exotic Asian foods at restaurants in her hometown of Amsterdam, visited a temple to talk to Buddhist monks, and even posted pictures of her snorkeling! (Turns out the photo was taken in a pool, and fish were photoshopped in later, but I don’t judge.)

The whole fake trip was a college project to show that posts on Facebook don’t necessarily paint an accurate picture of peoples lives. I have to give her credit for her commitment – she even decorated her room to look like a Southeast Asia hotel, and skyped with her family at odd hours of the night. I don’t think it’s necessary to take things that far, but you get the point.

I came up with a few staycation ideas, but I think this would be easier to brainstorm if I was in Seattle. The wine aisle at Trader Joes would be fabulous for inspiration – their wines are divided up BY COUNTRY. I don’t know about you, but I really like to let booze help me make creative decisions. Here are some of my ideas:

Bust out your Beret!

France: Make crepes for breakfast, or have French Toast (I realize that’s probably not actually French, but cut me some slack). Rent the movie Amelie. Pack some baguette sandwiches and go on a lunch picnic. Take up smoking. Buy a beret and wear it around town. Attempt to make croissants (good luck on that one). And, of course, be sure you have a bottle of wine every day. Sounds like a good vacation to me.

Mexico: This one is easy, because almost every town in America has lots of Mexican Food Restaurants where you can eat ALL WEEK LONG. Also, this one means a siesta every afternoon – win! This staycation should end with a bang – grab a piñata from your local party store, put on some mariachi music, throw a fiesta for your friends, and go to town on the margaritas. 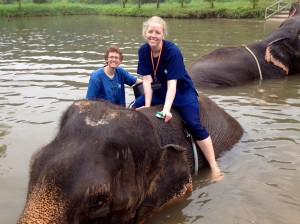 Thai Staycation Bonus: You won’t get pooped on in the water by an elephant.

Thailand: This week, you should have noodle or rice soup for breakfast! But no cereal. Splurge a little bit and get a bunch of mangos from Costco this week. Learn to make the heavenly dish that is som tam. If you really want to go all out, hide your hand soap and downgrade to scratchy toilet paper (I still haven’t found anything like Charmin over here). Go to the zoo and look at elephants. Find and visit a Buddhist temple in your area, and try to meet some monks. Go out for as much Thai food as you can handle (spoiler alert: Thai food never, ever gets old). 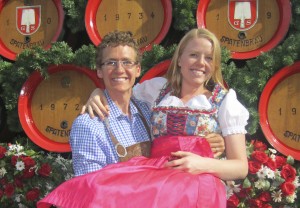 Germany: Guten tag! The wine of the week is Riesling! Meals this week should be heavy on the meat, potatoes and cheese, and raw vegetables should be scarce. Eat softboiled eggs, prosciutto, brie, and bread rolls for breakfast. BE SURE TO BUY SOME NUTELLA. Bake some homemade pretzels and gingerbread, play lots of Oompah music like you’d hear at Oktoberfest. I will not judge you if you buy a leiderhosen or dirndl and wear it all week long. You should also get your own liter beer mug. Order an imported keg of German beer, and throw your own Oktoberfest party!

England: I don’t care what you do for this one, as long as you talk in a British accent all week.

These are just a few of my thoughts – what are your ideas? I get more and more excited about this type of a staycation the more I think about it – how fun would something like this be for kids?!