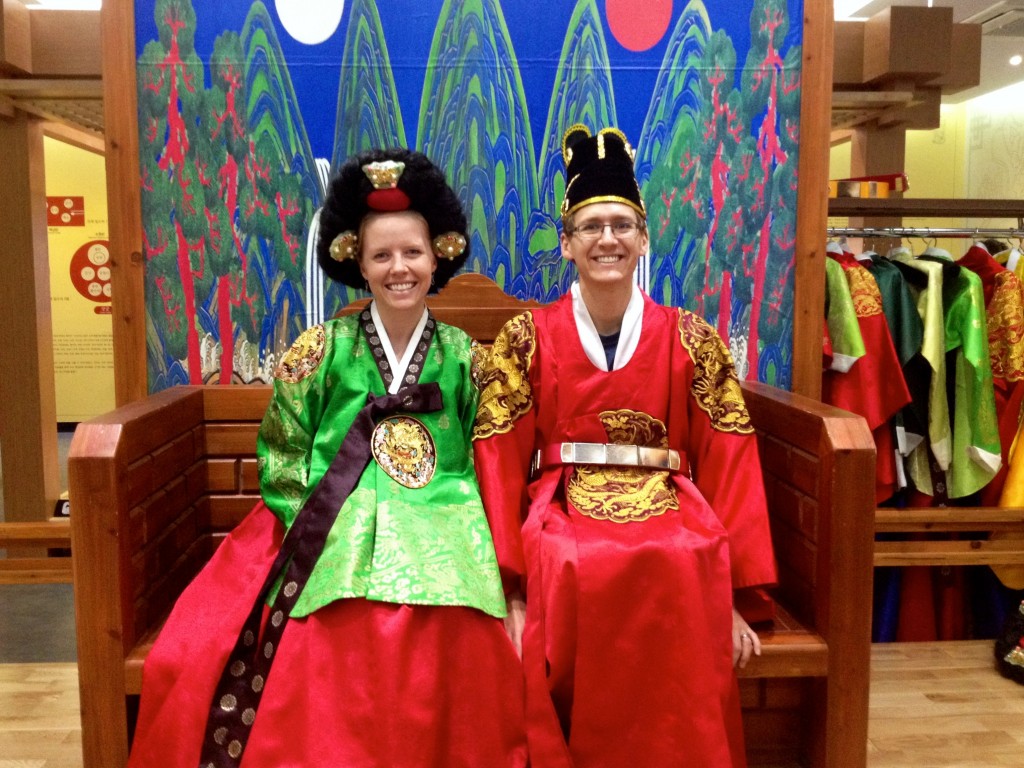 There’s nothing I dread more than a really long layover.  Everyone, at some point in their lives, has had the scour-the-airport-for-an-electrical-outlet try-to-sleep-on-the-floor wish-you-could-get-some-fresh-air experience of being in an airport for too long.  So when we were faced with a 12-hour layover in Seoul at the Incheon International Airport, I was a little bit worried.  Fortunately for us, Seoul’s Airport is ridiculously awesome!  Read on for the reasons why it’s so wonderful.

ICN Airport offers seven different types of tours for passengers with long layovers, varying from 1 to 5 hours in length.  SEVEN TYPES OF TOURS!  They have something for everyone – everything from a Seoul Shopping Tour to an Incheon Temple Tour.  Heck, they will even help you plan your own self-guided tour in the city.  The kicker?  It’s 100% free of charge!  Thank you, South Korean taxpayers, for making my stay so awesome. 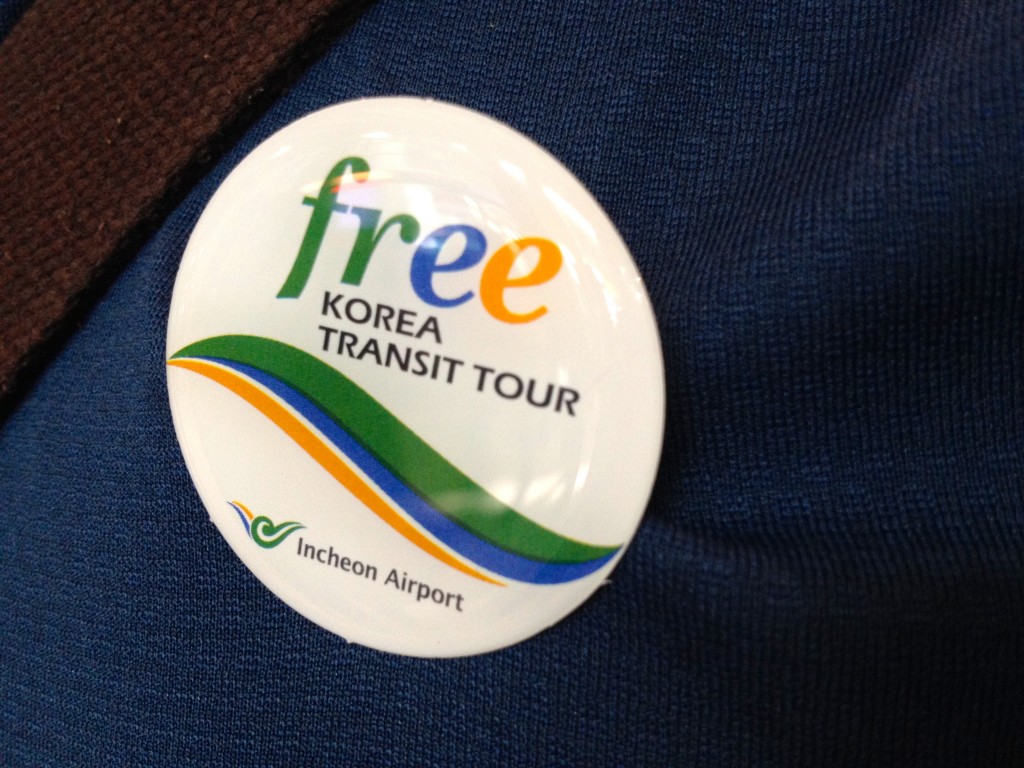 UPDATE 2/21/2018: When I originally wrote this post, there was not much info online about how to sign up for transit tours. I vaguely recall signing up for a tour online, then missing it because the immigration process took longer than we anticipated! But the Incheon airport appears to have fixed their website! Visit their tours site for information on how to make reservations. I am unclear on whether or not the tours now cost money – if you have info on this, please leave a comment to help out other travelers!

Our guide, Mr. Bae, was great.  His first name was “Sang Beom”, which he told us is essentially the Korean equivalent of “Bob”.  Here he is telling us to hurry up and get on the bus: 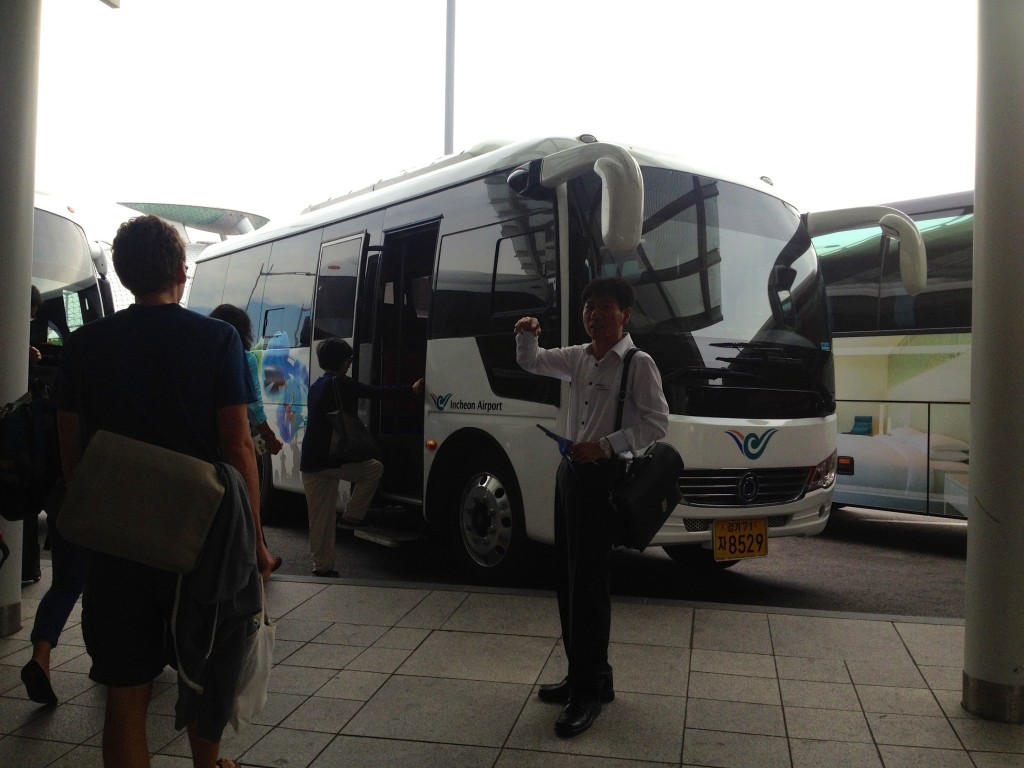 First stop was Wolmi Park, which has a nice cultural center we visited.  That’s where we took the photo at the top of this post with us dressed up like Korean Royalty.  We also snapped this gem: 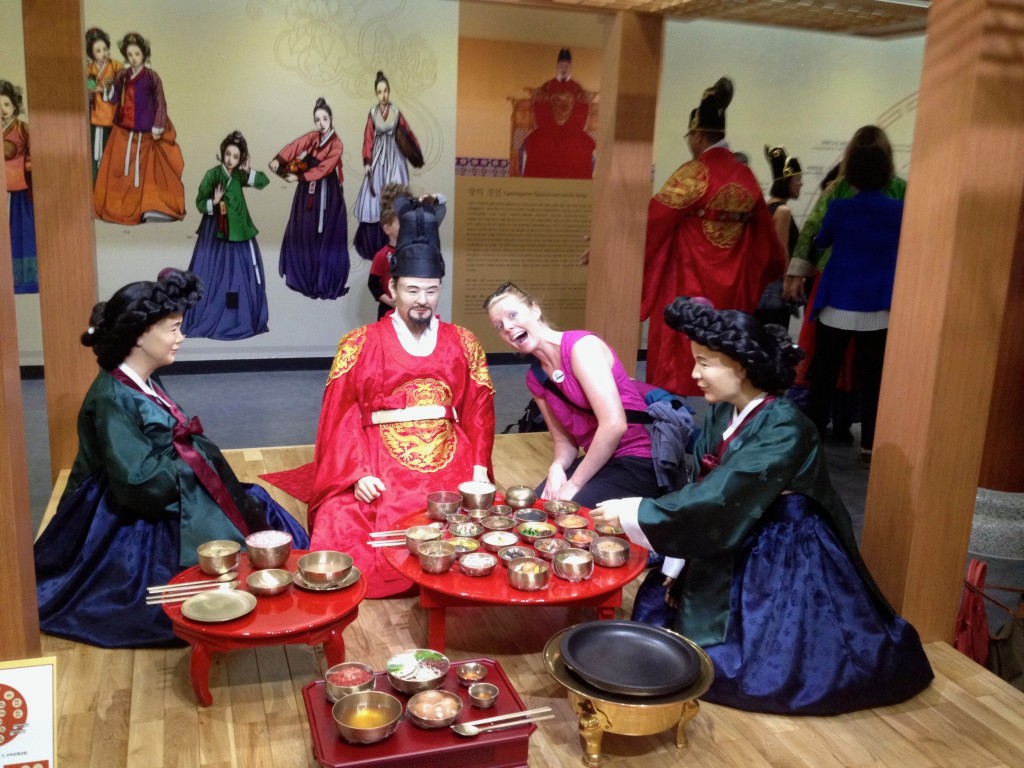 Hopefully we can blame this one on jet lag?

We were SO EXCITED to see evergreen bushes and trees in South Korea: 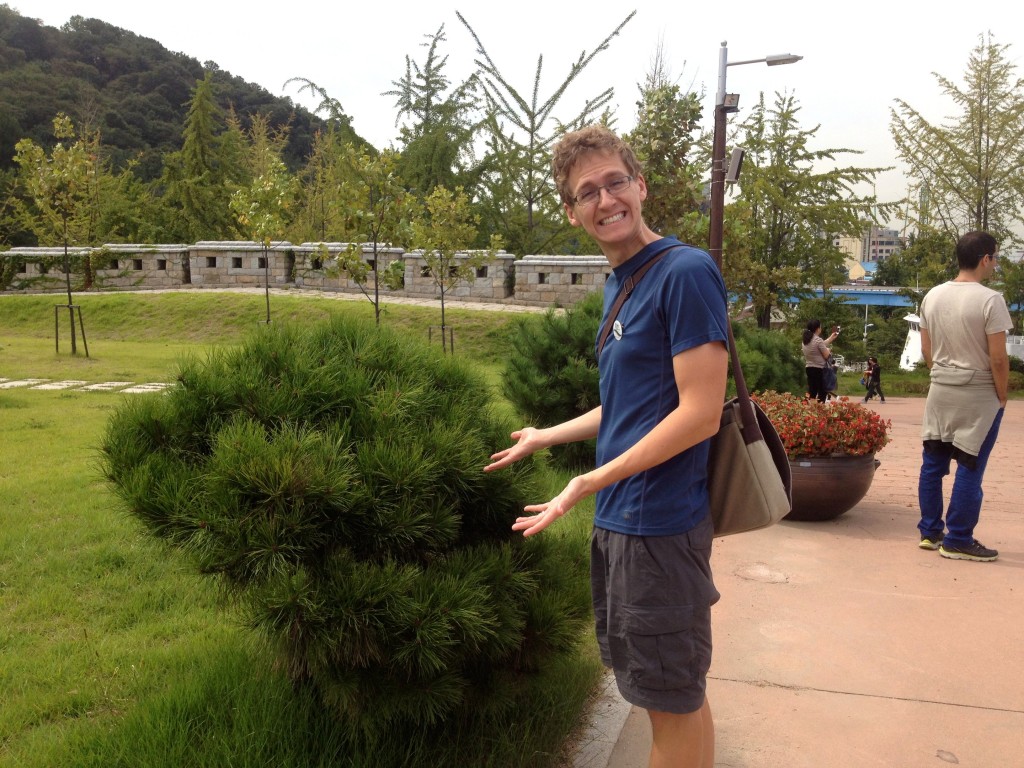 At Wolmi Park, they have great photo opportunities. 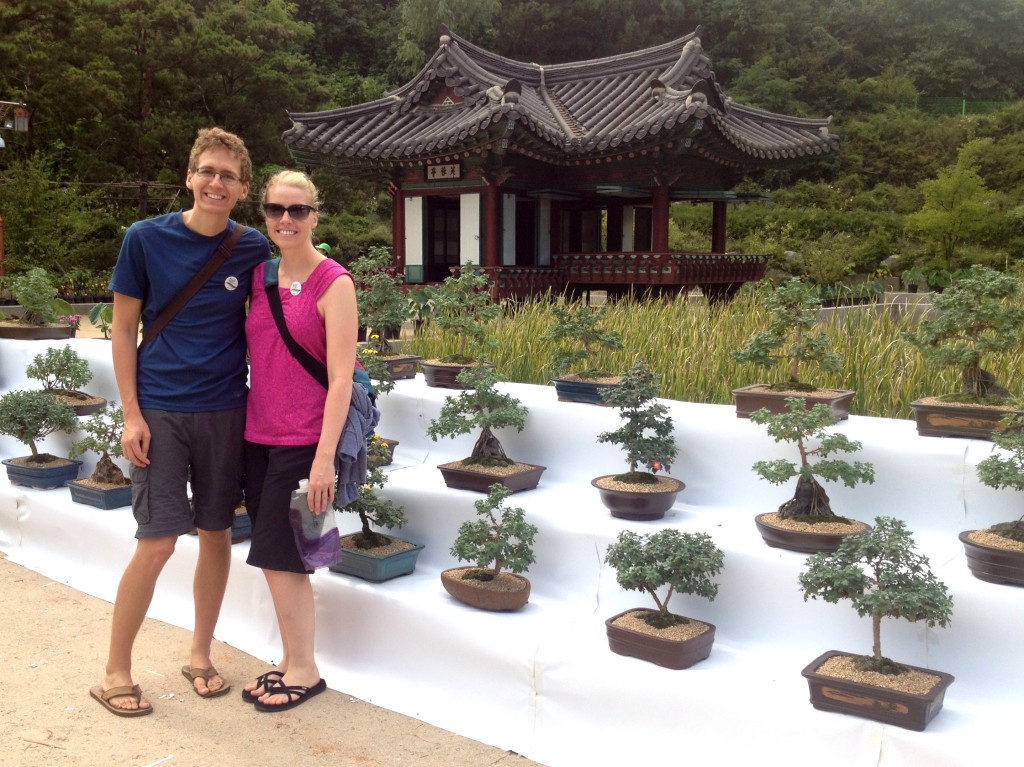 They have beautiful ponds and pagodas and bonsai trees. 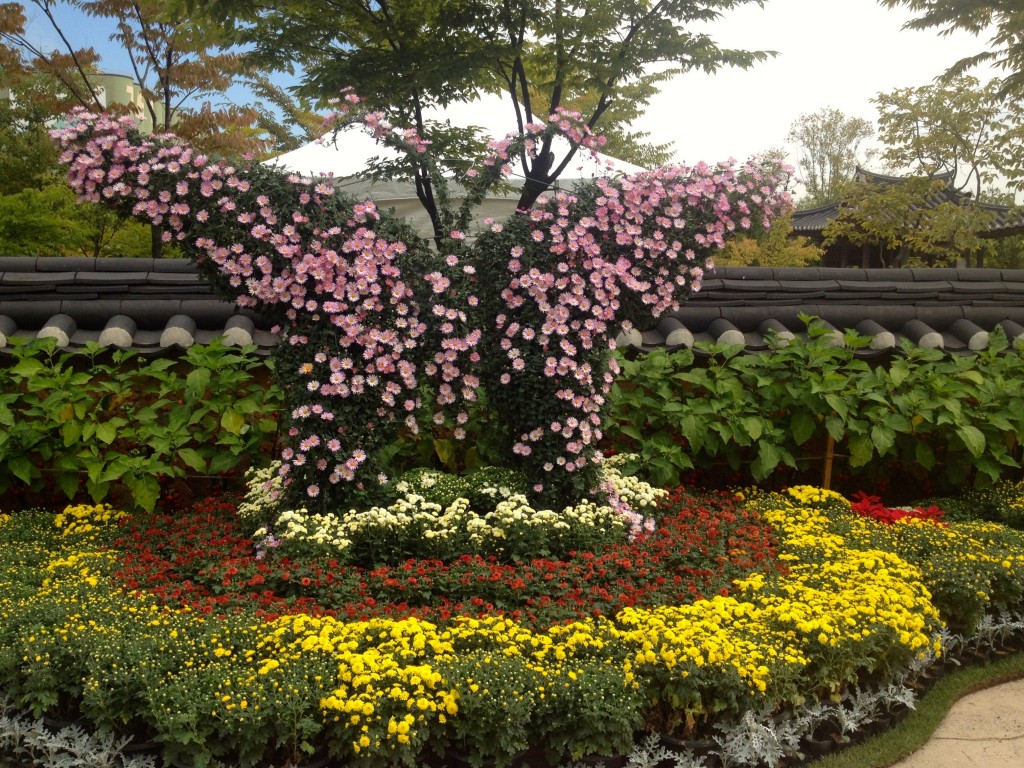 They also have dinosaur-shaped flower exhibits. 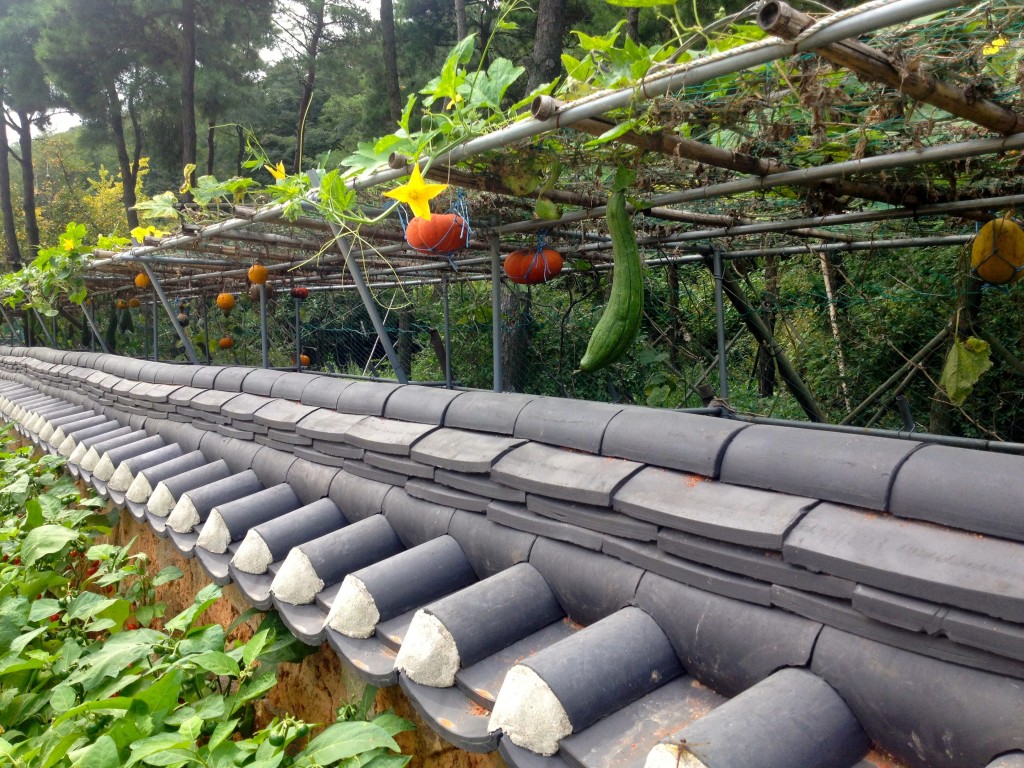 One thing I thought was really amazing was the pumpkin and squash vines hanging from a trellis. 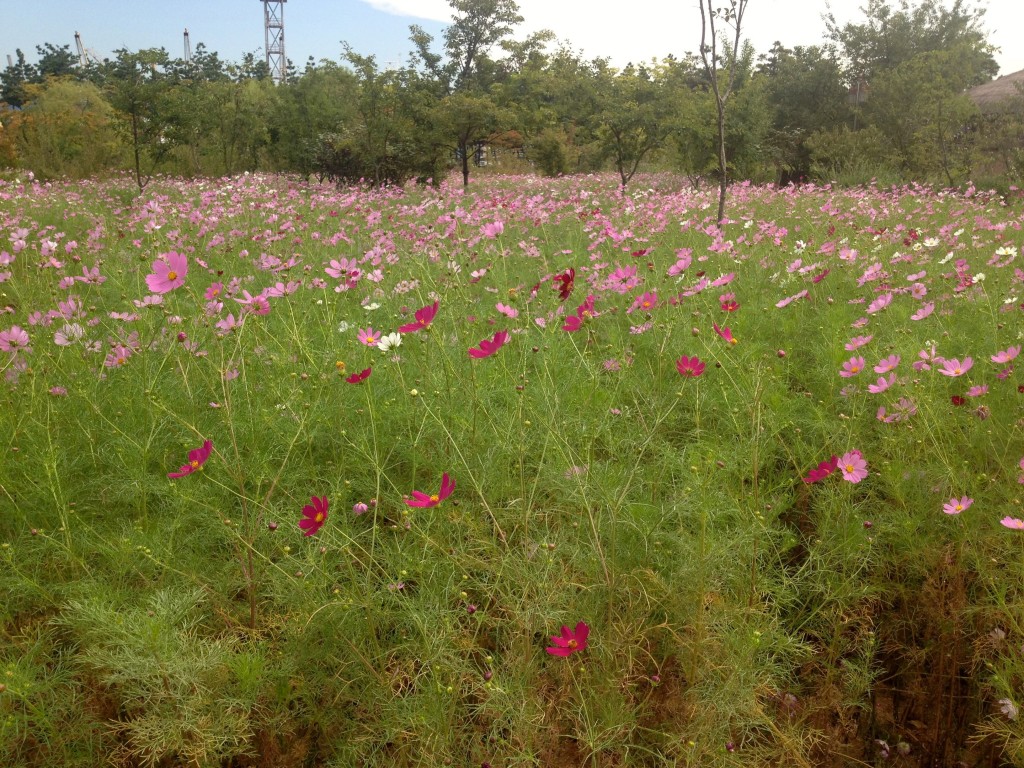 There were beautiful cosmos fields. 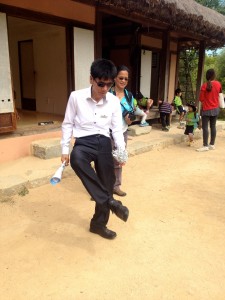 At Wolmi park, Mr. Bae even busted out his hacky sack skills! 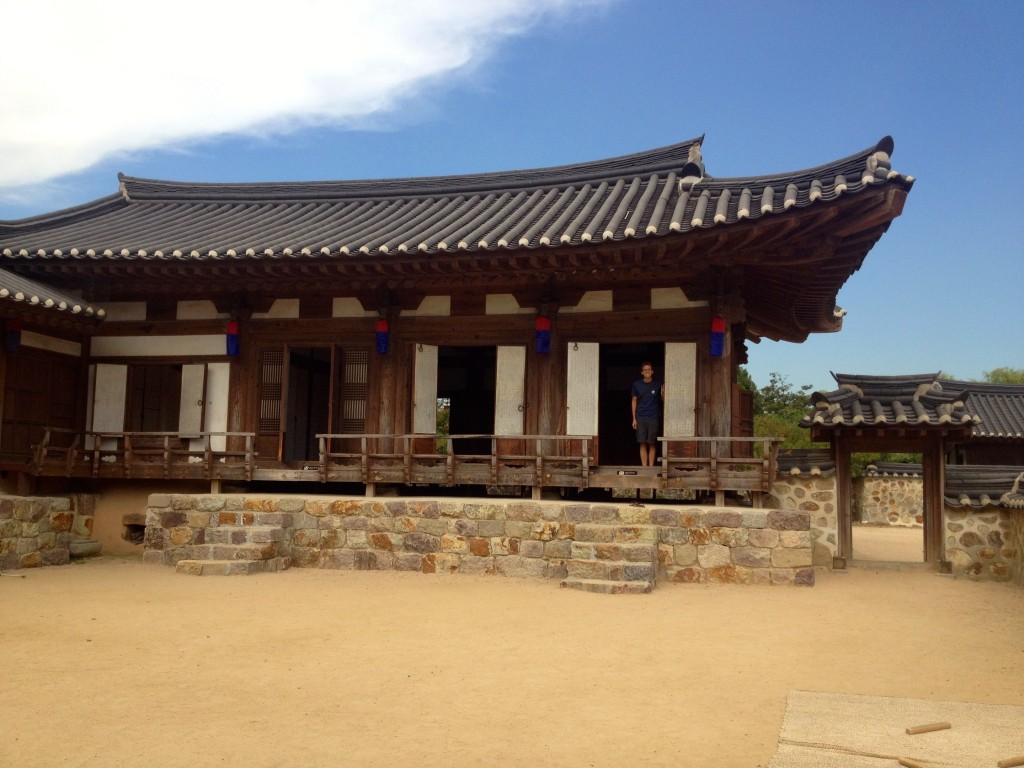 There were also replicas of traditional Korean houses.

Next stop on our Incheon City Tour was Sinpo Market!  Anything involving street food always gets us hyped up, so we were super excited.  We read up a little bit using the free wifi at Incheon Airport before leaving, and knew we had to try the spicy fried chicken Sinpo market is known for. 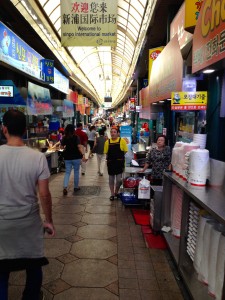 Pro tip: take some South Koreon Won out of an ATM before leaving the airport!  Otherwise you’ll just have to look at all the good food and won’t get to taste any of it. So sad. 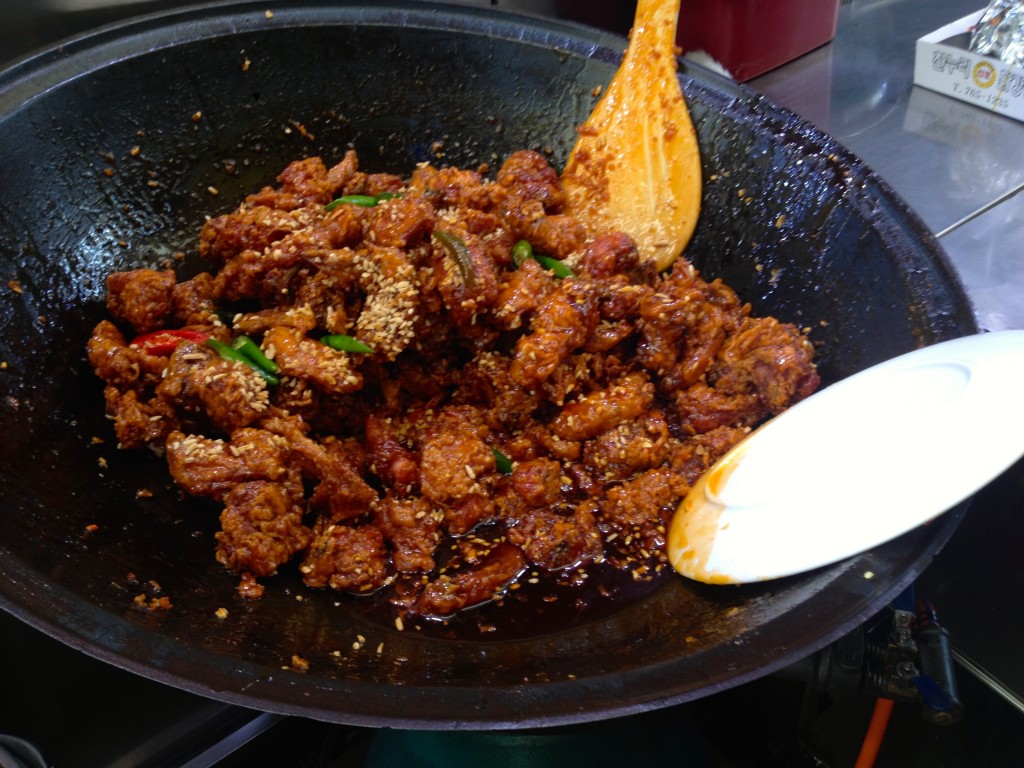 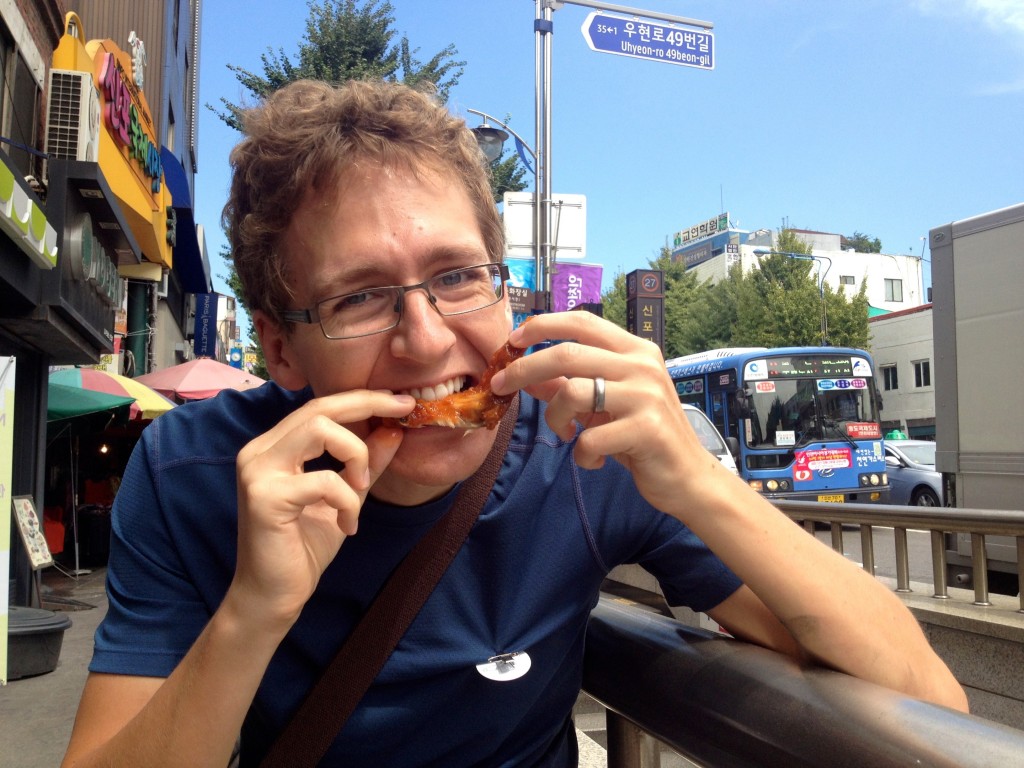 The chicken was DELICIOUS. 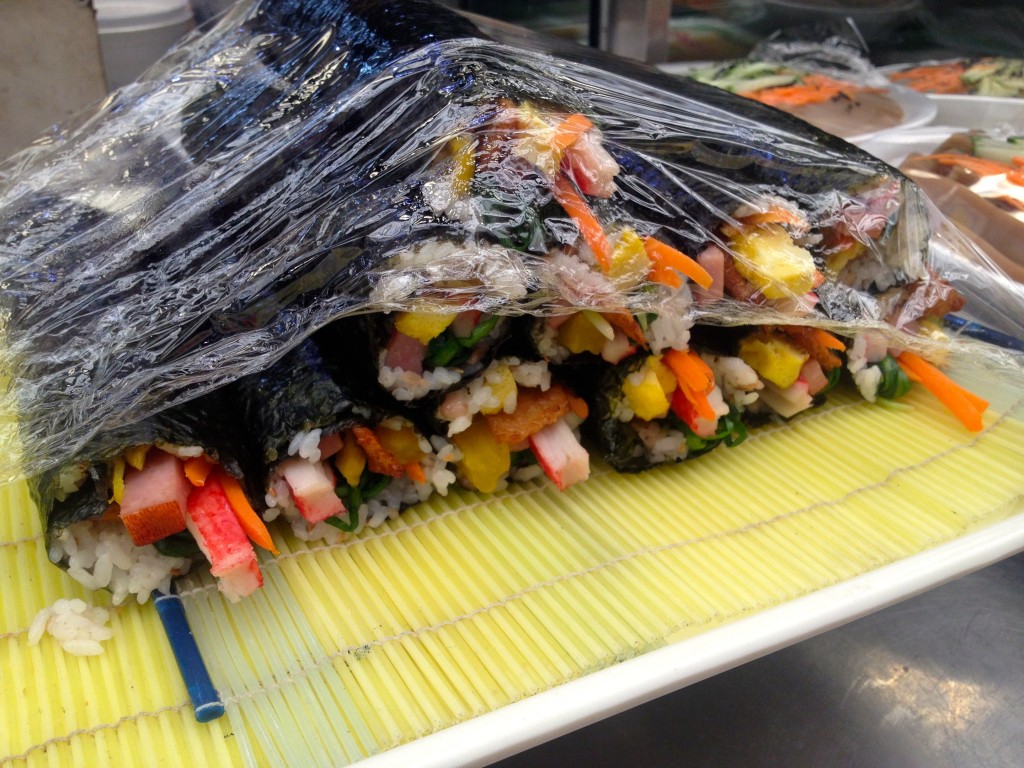 The transit tour verdict?  A MUST DO!  I might even schedule in a super long layover next time we travel through South Korea solely for the purpose of taking another tour.

There are lots of travelers I dread sitting next to on an airplane.  There’s the guy with the cold, who is coughing, sneezing and blowing his nose the entire flight.  There’s the lady who wants to be your new bestie and won’t stop quizzing you on all your life details.  There’s also the guy on his way to a bachelor party, who is determined to single-handedly drink all the beer stocked on the entire airplane.  But there’s probably nothing worse than sitting next to the smelly person, who somehow doesn’t realize they need a shower and also prefers to fly with their shoes and socks taken off.  Fun times.

The only thing worse than sitting next to the smelly person is being the smelly person.  No one wants that.  Lucky for all of us, there are free showers at ICN airport!  And let me tell you, after a warm taxi ride to Chiang Mai Airport, followed by a red-eye flight, followed by a long transit tour, we needed a hot shower.  I would’ve settled for a garden hose at this point. This is the only photo of the showers I got!  I assure you, they were really nice.

I expected a shower room that would evoke thoughts of prison; you know, the sterile white tile, the stained grout lines, the crappy shower head. Fortunately, I was way off.  The shower rooms were each more like a nice hotel bathroom than a prison.  They even had rainwater shower heads!  When we walked in, we were greeted by the guy at the desk who cleans the rooms after each use.  He handed us a towel along with organic shampoo and soap. Nice work, Seoul!

ICN Airport scores high for being rich in cultural experiences.  I don’t think I’ve ever been to an airport before where they have craft areas set up where you can make traditional Korean handiworks.  There are also musical performances with traditional Korean musical instruments: 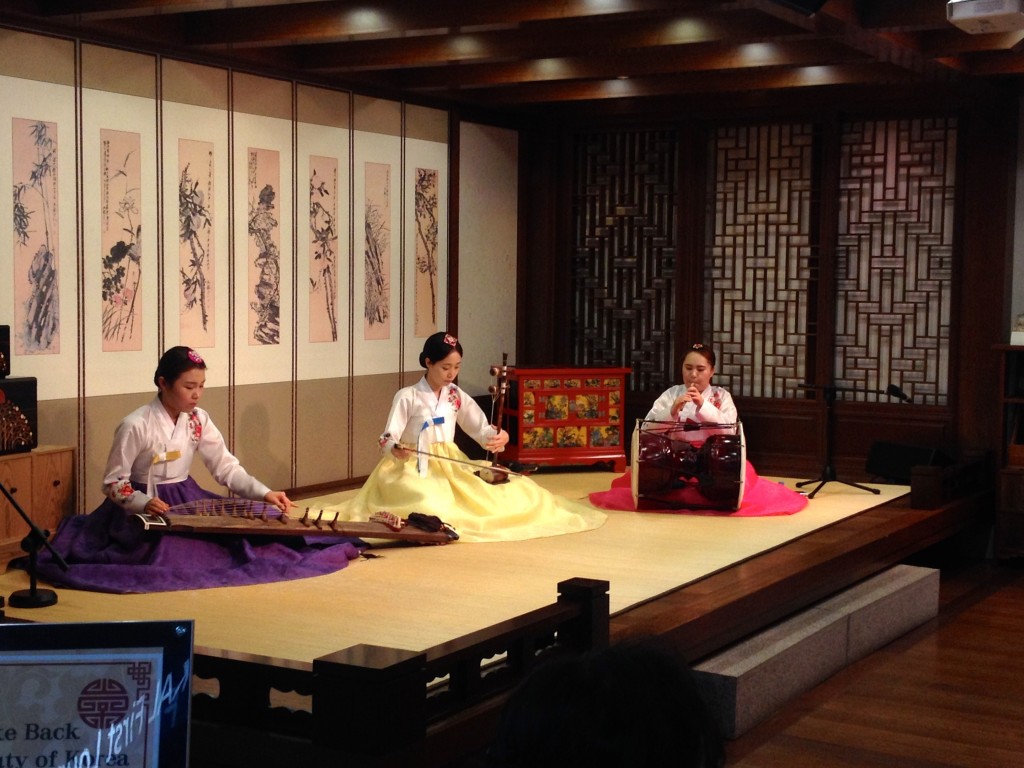 There was also a String Quartet performing with a piano accompanist!  These were some talented ladies: There is even a Royal Parade several times per day!  A parade!  In the airport!  If that’s not enough for you, they also have “Traditional Cult Rehabilitation”: Traditional Cult Rehabilitation?  (See the last line on the sign.)

Ok, only kidding on that last one.  Some smart ass scraped some letters off the sign so instead of saying “Traditional Culture Exhibition” I read it like “Traditional Cult Rehabilitation.”  We can blame that one on jet lag!

If the tours, showers, and cult rehabilitation doesn’t keep you busy, there are tons of places where you can spend some of that extra Won you’ve got in your pockets.  ICN Airport is packed with duty free shopping for everything from rice cookers to liquor to fancy jewelry.  If that doesn’t strike your fancy, there is no shortage of restaurants and cafes.  There is even a Guinness cafe with Guinness on tap (for something like $14/pint)!

I liked the Charlie Brown Cafe: I also got a kick out of the Hello Kitty Cafe. Here I am, striking a pose at the Hello Kitty Cafe.  Can you find me?

There are trees.  INSIDE.

Someone at ICN Airport has a green thumb.  The airport is absolutely filled with nature – there are huge beautiful trees, tons of Orchids, there’s even a huge plant wall inside the smoker’s room. 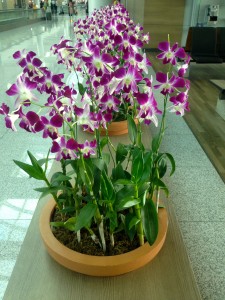 Look at these gorgeous orchids.

We snagged some really comfortable leather lounge chairs in the relaxation area and napped.  Nothing makes a nap better than being surrounded by beautiful orchids: 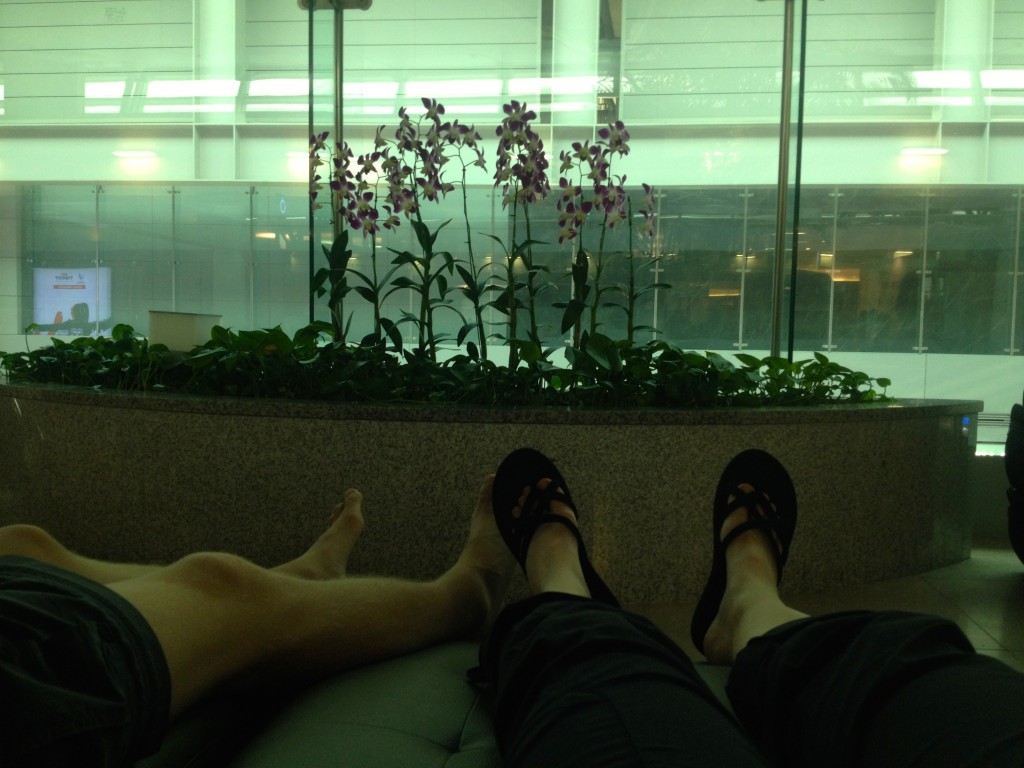 If you just want to hole up in a nice room and shut the world out, it’s easy to do!  Rooms at the slightly pricey but luxurious Transit Hotel allow travelers to escape the airport madness and get some much needed rest.

After having such a great time during our long layover in Seoul, I think it’d be nearly impossible to convince me to fly through Tokyo or Beijing ever again.  (Especially after officials in Beijing almost put me into quarantine.  That was fun.)  Have you had any notable, absurd, or just plain awesome airport experiences?  Please share ‘em – I could use a good laugh!

79 thoughts on “A Long Layover in Seoul”